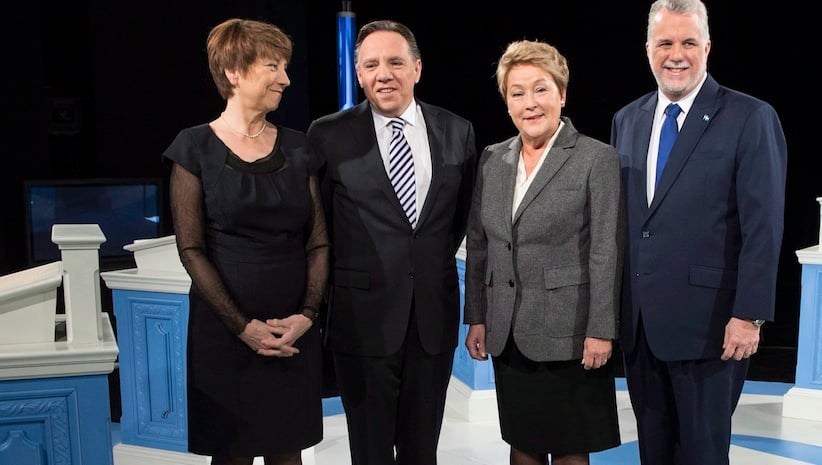 Liberal Party leader Philippe Couillard didn’t win. He couldn’t. After two weeks of wind in his sails—he started the campaign dead in the water, remember—he was given a good, old fashioned flogging in the second leaders’ debate. Couillard himself is a ripe target, having entered into a business arrangement, however unconsummated, with Arthur Porter even as the less seemly aspects of the alleged über-shyster were coming to light. The Liberal Party itself, meanwhile, has a nearly a decade’s worth of unseemliness in matters of financing to answer for. That a corruption inquiry is even taking place is almost despite the party; as the Parti Québécois and the Coalition Avenir Québec have pointed out, most Liberal MNAs were against such a thing before they were for it. Couillard got righteously rattled tonight, as expected and deserved.

As we enter the final stage of the campaign, the question is whether the beating Couillard took last night was sufficient to halt his progress. I’m not so sure it was. Couillard is often faulted for his seeming inability to get mad, yet tonight it served him well. Even as PQ leader Pauline Marois attacked him on issues like language and identity—and did so far more effectively than in last week’s debate—Couillard remained preternaturally calm. He was doubly so in the face of CAQ leader François Legault’s nearly apoplectic rage on similar issues; the pair’s exchanges proved only how the CAQ’s slide is probably the Liberals’ gain. Legault’s exchanges with Marois, meanwhile, were prove of how their differences go well beyond the political.

I didn’t have a stopwatch handy, but I’d swear the portion devoted to language, identity and the so-called Quebec values charter was far longer than that of, say, the economy. That’s fine—Quebec politics wouldn’t be Quebec politics without a heaping slice of heartstrings to pretty up such dry issues as jobs and debt. Again, that is to Couillard’s great disadvantage; because of its weird and blinkered linguistic history, a Quebec election campaign isn’t the time to bring up the point that bilingualism isn’t a threat but an asset.

Yet I wonder how many undecided voters will be swayed by the very familiar language-baiting rhetoric of Marois and Couillard. Voters who care deeply about language and identity won’t vote Liberal anyway; most undecideds like to hear about jobs and the economy, and are easily assuaged by the Liberal Party’s lip service to the importance of French. Not coincidentally, Couillard’s spiel during the debates on matters of the tongue was punctuated with those very words, repeated ad nauseam in that weirdly hypnotic tone of his.

Couillard’s momentum was certainly slowed tonight. Marois, especially, successfully reminded viewers that Couillard leads a party with an unfortunate recent history—while deftly stickhandling the iffy nature of some of her own party’s fundraising. She kept referendum chatter to a minimum, which is key to the PQ’s success in all the battleground ridings. She reminded the viewing public of what Quebecers in general know: sadly enough, Quebec elections are two-horse affairs, and they best pick the right one.