Quebec voters went to the polls Monday to decide the shape of their next government. Polls closed at 8 p.m. ET and the first results began to roll in soon after. At 9:15 p.m., The Canadian Press declared a majority government for the Coalition Avenir Quebec.

READ MORE: Paul Wells — The end of an era, the beginning of—something

The Liberals had 68 seats at the legislature’s dissolution, while the Parti Quebecois had 28, the Coalition Avenir Quebec had 21 and the small, left-leaning Quebec solidaire had three. There were five Independents. Sixty-three seats are needed to form a majority.

Politics in Quebec is anything but straightforward, so here’s the skinny: You have the relatively young Coalition Avenir Quebec, less than 10 years old, which was poised on election night to form government—or so say the public opinion polls. There’s the Parti Québécois, which since forming government in 2014, has lost one election, two leaders, and could soon hit a historic low in seat count. There’s the Quebec solidaire, which has two spokespeople but no party leader.

Oh, and don’t forget the Liberals, who’ve ruled the province for much of the last 15 years, but are falling fast in the polls as they desperately try to remain in power.

To help navigate all this, here’s a primer on the leaders, the issues and the horse-race between parties.

Coulliard has been leader of his party since 2013, and premier of Quebec since 2014. A former neurosurgeon and university professor, Couillard’s Liberals have made cuts to both health care and education since being elected—which were unpopular decisions. The Liberals also put forward legislation banning face coverings while receiving public services, a move essentially targeting Muslim women who wore niqabs or burkas, but a judge found portions of the new law contravened the Charter of Rights. And yet, as immigration has become a key election topic, Couillard has come across as a unifier, appearing in ads saying: “No to expulsion. No to tests. No to discrimination. All Quebecers united.”

Legault has been the leader of the CAQ ever since the party was founded in 2011. Prior to politics, het was a businessman who founded Air Transat in 1986, before transitioning to the Parti Quebecois for the 1998 provincial election. He was a former cabinet minister during his years with the PQ, but co-founded the CAQ as a big-tent party of Quebecers with a promise they would never support a referendum on Quebec sovereignty. Big tent aside, his party is most closely identified in this election race for tighter controls on immigration.

If the status quo had held for the PQ, it would be entering this election under the leadership of media magnate Pierre-Karl Péladeau. That’s who members elected as their permanent party leader in 2015, but that didn’t last even a year. PKP resigned in 2016 saying he wanted to spend more time with his family.

Enter Lisée, a journalist and author, who entered the fray announcing that the party would not seek Quebec’s sovereignty in its first mandate—a drastic change for a party largely built on pursuing Quebec independence.

Officially, the QS doesn’t have a leader. It’s complicated. The party has a chart to explain how it all works, but that only makes things more complicated. Instead, the party has co-spokespeople, one male and one female. This election, they are Nadeau-Dubois and Massé. The way they’ve set it up is if the QS forms government, Massé would be premier and Nadeau-Dubois would be her deputy, which is why she was the “leader” for the election debates. But again, she’s not the leader. Got it?

The CAQ has never won an election. In fact, Quebecers would have to go back to the mid-1970s (and the Parti Quebecois) for the last time a new party came to power. But according to CBC’s poll tracker, the odds that the CAQ will pull off a majority government is currently the same as a coin flip: 50-50. It’s currently polling around 33 per cent, so even if the CAQ falls short of a majority, odds are strong it will be the party with the most seats in the national assembly.

The Quebec Liberals may be subject to incumbent fatigue among voters; the party’s been in power since 2003, save for a two-year blip starting in 2012 during a Parti Quebecois minority government). Their current polling numbers have fallen just below 30 per cent, which doesn’t sound so far below the CAQ. But recent poll averages put the odds of the Liberals winning the most seats at about seven per cent.

The Parti Quebecois, meanwhile, have fallen mightily since holding power earlier this decade. With polling numbers under 20 per cent, the PQ could face its worst showing in history. (The current low is seven seats, back in 1970 for the party’s first appearance in provincial elections.)

The Quebec solidaire, on the other hand, has grown significantly since 2014. Even if it is still stuck in fourth, polling numbers of 16.5 per cent should be enough for a record showing. The QS could conceivably triple its three seats after tonight’s election.

How many immigrants should Quebec have? This is was a key talking point of the campaign. The Quebec Liberals want more, especially for areas facing labour shortages. And they’ll put up $30 million to help with French language training.

The CAQ, on the other hand, campaigned on reducing immigration to 40,000 new arrivals per year, a 20 per cent drop, and would also add language and values testing for those newcomers after three years to see if they can stay. (How to enforce a language test is still a major question mark.)

The PQ would prioritize immigrants who already speak French—no language testing required. The QS, meanwhile, says it would triple the budget of a special employment program for immigrants. Otherwise, the QS has been deliberately silent on the issue, with Nadeau-Dubois saying he didn’t want to “feed the immigration debate” and hoped Quebec voters could focus on more “pressing issues.”

The word of the day is “free.”

The PQ said it would support free tuition for CEGEP and universities, and subsidize school lunches. The Quebec Liberals campaigned on free day care for four year olds and a teaching assistant in every kindergarten classroom.. The CAQ wants to free up 50,000 day-care spots by offering government-funded pre-kindergarten classes for four year olds. Not to be outdone, the QS is advocating for all eduction to be free—from day care to getting a PhD.

If the CAQ gets a four-year mandate, the party promises every Quebecer will have access to a family doctor or “super nurse” within 36 hours, Emergency wait times will be cut down by 90 minutes and seniors homes will get overhauls, with better food and air conditioning.

The Liberals would also be looking at cutting down wait room times, as well as offering free dental care to kids under 16 and seniors. In order to further cut down on hospital wait times, the PQ said it will create clinics without doctors—where nurses and pharmacists will be available for minor emergencies.

Quebec solidaire’s major health platform would be the set up of a provincial pharmacies plan, allowing for cheaper drugs for everyone thanks to bulk purchasing by the province. 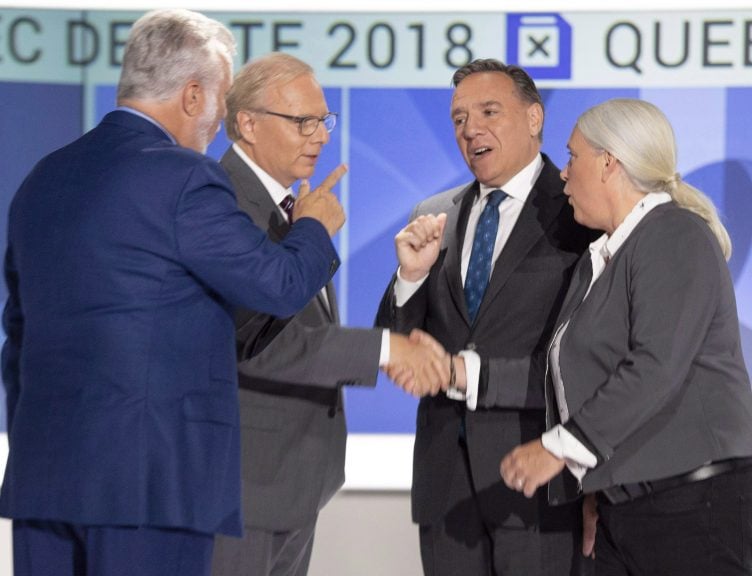