Quebec election: The end of an era, the beginning of—something

Paul Wells: There were parallel routs of the old-line parties, as the Liberals and PQ suffered historic drubbings. The CAQ is just what's left over. 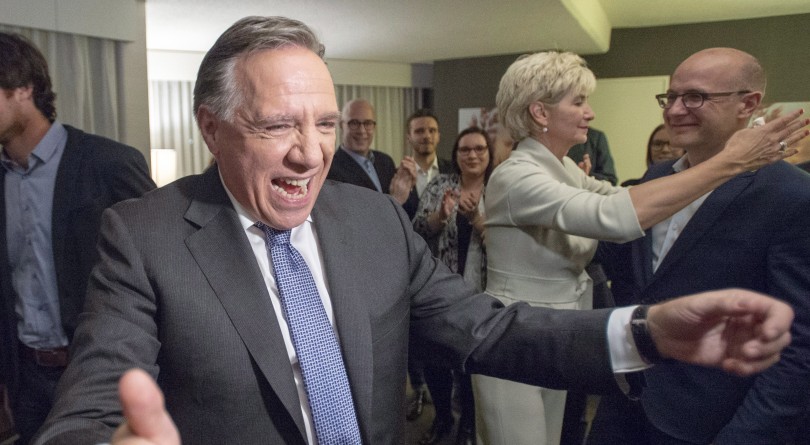 For a century and a half, the solidity of the Quebec Liberal vote was a constant in the province’s politics. There were two broad currents in the Quebec political culture, bleu and rouge, nationalist and—harder to define; secular/ pro-business, maybe. Whatever else happened, the Liberals could count on a solid base, including most of the anglophones. Even in 1976 when René Lévesque’s Parti Québécois swept to power, Robert Bourassa’s Liberals, worn out, scandal-ridden, still held one-third of the vote.

On Monday night Philippe Couillard’s Liberals won only one-quarter of the popular vote. It’s the worst Liberal score since Confederation. A historic drubbing.

And it’s not the only one. In 2014 the Parti Québécois under Pauline Marois won barely 25 per cent of the popular vote, lower than in any election since Lévesque’s PQ first contested an election in 1970. On Monday Jean-François Lisée’s PQ won less than 18 per cent. Worse than Lévesque did in 1970. The PQ’s worst showing ever.

Swept to power by the collapse of the old parties were François Legault and his—well, I’ve used the term “upstart” Coalition Avenir Québec before. But it’s an odd upstart: contesting its third election, a direct offshoot of the Action Démocratique du Québec of the ’90s and ’00s, a distant cousin of the Union Nationale of the ’50s and ’60s. Legault was first elected, for the PQ, 20 years ago. He’s been banging around Quebec politics longer than any of the others, in one capacity or another. The urge to vote Legault was as much a yearning for comfort as a zest for change. He’s like the beat-up old shoes you put on when trendy fashions pinch.

I’ll get to what it means for Quebec and the rest of us in a minute, but can we pause to reflect on how cruel politics is? Couillard, a brain surgeon with formidable intellectual gifts, ran and won a majority in 2014 on a promise to do what he set about doing: swiftly balancing the budget so he could afford modest investments in the future. Voters never forgave him for the harsh first steps even after they ended on schedule. I liked this guy a lot and I think voters will have occasion to miss him.

Lisée is that guy who’s always been sure he knew how to do the thing better than the people who were doing it. As a political journalist, a strategist, an author, a cabinet minister, a losing leadership candidate, he made no secret of his conviction, not only that sovereignty was the best destination for Quebec but that he could find the best path. This crushing result and his personal defeat in his own Montreal riding are a personal rebuke. The only consolation is the memory of the stylish, funny, clever campaign he ran. It seems slender recompense.

A shout-out, too, to the Québec Solidaire party, left-of-left, tailor-made for disaffected young urban voters who believe traditional politics has nothing to offer them. Its founding co-leaders quit before this campaign, and its most prominent spokesperson, Manon Massé, seemed to learn on the job as the campaign proceeded. The party’s modest breakthrough, 15 per cent of the vote and 10 seats as I write, is another ingredient in the parallel routs of the old-line parties.

I’ve taken the long way around to talking about Quebec’s next premier because I really believe his mandate is more negative, residual, than an expression of enthusiasm: The CAQ is what’s left over when you’re fed up to here with the other parties. This takes nothing away from his victory or his mandate. He’ll be Quebec’s legitimate premier. Just about every recruit he’d hoped to put in his cabinet will be available to him. They include professionals, economists, politicians with rich experience in local politics. He’ll have latitude to do what he wants.

MORE: Sign up for the Maclean’s Politics Insider Newsletter

What’s that? No referendum on secession. Like most Quebecers he finds the question uninteresting. Some early moves on identity politics: a “temporary” cut of about 20 per cent in immigration levels, and a comic-opera attempt to conscript Justin Trudeau into his plans to eject immigrants who don’t learn French quickly enough. That latter initiative will go nowhere. Legault’s attempts to find a “solution” to the question of how immigrants in the public service should dress will lead, sooner rather than later, to the amazed realization that there is no solution that pleases everyone. Legault will waste much time trying.

I really don’t think his tenure in government will be remembered for all that, however. He’ll try some of the identity stuff, he’ll get burned, he’ll move quickly to change the channel. Meanwhile he’ll have the healthy economy Couillard left him to manage. Legault’s instincts are pro-business, pro-entrepeneurship, anti-corruption, vaguely conservative. What’s missing is any kind of robust plan to implement those notions, or any indication Legault holds fast to his convictions when the going gets choppy. We’ll see whether all the federal and provincial Conservatives rushing to congratulate him still see him as a kindred spirit in a year.