As dark as things are for the Premier, he can take comfort in this: his opponents aren't faring much better than him 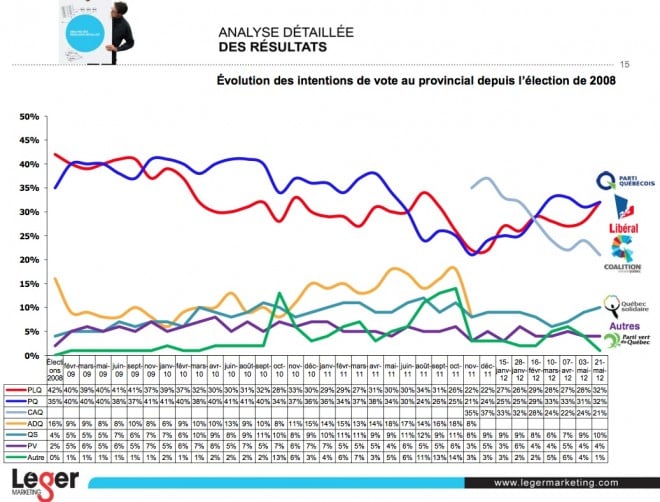 The PQ, neck and neck with the Liberals. Courtesy Léger Marketing

Riddle me this: if, as a majority of Quebecers believe, the Quebec government’s special law regarding protests goes to far; and if, as the same Léger Marketing poll suggests, an overwhelming majority of Quebecers believe that the government should lay off the obstinacy and return to the bargaining table with the students; and if the recent 100,000-strong protest in the streets of Montreal was less about tuition fees than almighty rage against the Charest government, then why, pray tell, is the Parti Québécois still only neck and neck with with the big, bad Liberals, at 32 per cent a piece?

And why, despite having wholeheartedly embraced the student movement’s position to the point of wearing its red square on her lapel everyday, is Pauline Marois only just as popular as Jean Charest? The numbers speak for themselves: when Léger asked, “In the context of the ongoing conflict, do you have a good or a bad impression of the following people?”, Jean Charest ranked at 30 per cent good, 59 per cent bad. Marois, meanwhile, scored an equally paltry 31 per cent good, and only a mildly better 54 per cent bad. In short, despite having radically different and conflicting takes on the student movement, Jean Charest and Pauline Marois are basically within the margin of error with each other. This, after more than three months of headline-grabbing stalemate between the students and the government. What gives?

The answer, if not quite blowing in the wind, at least lies in the between Montreal and the rest of the province. For instance, 47 per cent of Montrealers are for Bill 78; In Quebec City, meanwhile, 54 percent of residents say they are for it. And while 75 per cent of Montrealers are for the City of Montreal’s ban on masks, the support is even higher in Quebec City and what is quaintly referred to as les régions: 80 per cent in both. (These numbers are from the detailed Léger that I can’t seem to find online.)

The numbers are even more stark when you consider how a large western chunk of the island of Montreal has always been staunchly Liberal. As Léger V-P Christian Bourque told me, “Provincially speaking, the west of Montreal is still very Liberal red.” Discount these Liberal red-or-die types (and they include French and English), and you have a real difference between Montreal and the rest of the province. “We’re seeing how opinions in Montreal and the rest of Quebec is getting and further apart. Montreal is more left and open, while the rest of the province is more conservative.”

The split between Montreal and the rest of the (Quebec) world is nothing new. As long ago as 2006, the Bloc Québécois commissioned a report on the phenomenon after a light electoral spanking in the Quebec City region at the hands of The Conservatives. The ensuing “Alarie Report” noted the following: “The Bloc, its leader [Gilles Duceppe], its organization, its program, the colour and scent it puts off is too Montreal.” One anonymous Bloc candidate, quoted anonymously in the report, was quite succinct. “Our platform was too lefty, too Montreal.”

For the PQ, there is an odd disconnect in this. By tilting her party to the right of the Bloc’s traditional lefty perch—and by the virtue of largely not being implicated in the plethora of scandals wafting around the Liberals—Pauline Marois has made inroads within the province, and rightly so—though, it must be said, she was only briefly ahead of Charest in the polls even before the current brouhaha. The caveat: this support has come mostly from les regions—where antagonism against the student movement is at its highest. “The PQ is ahead in the regions where the support for the government and tuition hikes is higher,” Bourque says. “By wearing the red square, the party has painted itself into a corner a little bit.” If the current protest had taken place in Quebec City rather than Montreal, Bourque says, “It would have been over a long time ago, and people would have been cheering the police.”

Certainly, the Charest government remains in crisis mode. Today, the Premier brought back Dan Gagnier as his chief of staff. He was Charest’s C-o-S in 2007, and managed to steady the Premier’s nosedive in the polls before resigning in 2009. Charest says Gagnier’s return has nothing to to with the student strike, which I believe about as much as his line about not paying attention to polls. And anything can happen in the coming days, weeks, and (oof) months with people and police frequently clashing in the street. And Charest will have to call an election before December 2013, when the collective memory of tear gas, strife and ugly laws (and alleged party finance skullduggery, and construction industry misery, and more mafia ties) will in all likelihood be stuck in Quebec’s collective memory.

But as dark as things are for the Premier, he can take comfort in this: his opponents aren’t fairing much better than him.