Paul Wells: It was time once again for the release of new mortality projections. In Quebec, a likely best-case scenario is still a rough optimism. 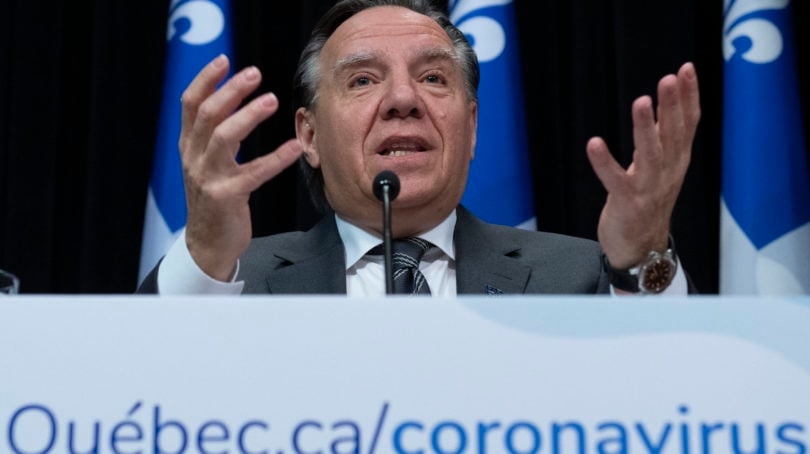 Legault responds to reporters during a news conference on the COVID-19 pandemic on April 7, 2020, at the legislature in Quebec City (CP/Jacques Boissinot)

John Maynard Keynes, the economist whose ideas are popular in Quebec as elsewhere, used to dislike his colleagues’ appeals to the long run. What matters is what’s happening now, and economists set themselves “too useless a task” when they worry about the ages, Keynes wrote: In the long run we are all dead.

In the short run, three taciturn public-health officials told reporters Tuesday in Quebec City, perhaps fewer than 1,300 Quebecers will be dead. It was time once again for the release of new mortality projections—the macabre exercise by which officials in a jurisdiction that is busy burying its citizens, and working flat-out not to bury more, pause to reveal their working assumptions about how many more will die before this mess is over. A week ago it was the White House. On Friday it was Ontario premier Doug Ford. Alberta premier Jason Kenney was preparing to release his province’s numbers later on Tuesday.

The torrent of hypotheticals was preceded by a brief online debate about whether anyone should be doing this sort of thing. Team Transparency calls it a laudable exercise in reducing the gap between what governments know, or believe they know, about us, and what we know about them. Team Decency wonders why we can’t just wait for the actual numbers, and what projections do to save lives. I’m in the first group with all kinds of sympathy for the arguments of the second. Your mileage may vary.

In the meantime, it falls to each government to decide how to make these announcements. Quebec Premier François Legault chose to absent himself from this announcement, which came three hours after Legault’s daily televised display of patrician concern and gentle chiding. Richard Massé, a veteran public-health official, displayed the charts.

The projection is barely a projection. It extends only to the end of April, three weeks out. It isn’t a growth curve with a zone of uncertainty on either side so much as a menu of starkly differing possibilities. In the “pessimistic” world, things go as badly in Quebec as they have in Italy and Spain. In the “optimistic” one, hospital beds and respirators don’t run out; the physical distancing measures that Legault and municipal officials are enforcing quite firmly work; people’s patience for the small sacrifices of this grim purgatory doesn’t fray. In three weeks 1,263 are dead in the optimistic projection, 8,860 in the pessimistic case.

What happens after April? Well, that’s the play. We’ll find out after April.

Hospitalizations are actually running a little below the optimistic curve, and Legault had already told reporters earlier that the low death number seems much likelier than the high. Another peculiarity of this season is that people are learning to be relieved by the prospect of death numbers that would once have seemed like mass slaughter. The optimistic number would be 27 times the death toll from the 2013 Lac-Mégantic train explosion. It’s a rough optimism.

Stranger still will be the Monday-morning quarterbacking, if Quebec hits its low number and Ontario hits its low number and the United States pays only a modest toll in the tens of thousands for the folly of its leaders, from people who will claim the effort was wasted, instead of that it helped. That the cost in treasure spent was too great for the cost in blood. But that’s an argument for another day. In the short term too many of us are still dying.