Paul Wells: A victory by the upstart CAQ could mark a historic shift in Quebec. Just don’t expect any radical changes. 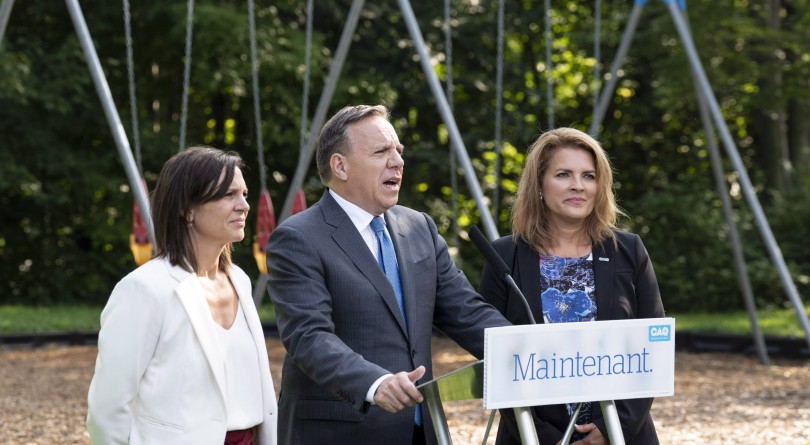 Whoever does advance work for the Coalition Avenir Québec campaign should get a raise. On a recent Monday morning in the pretty ski town of Bromont, the party’s leader, François Legault, arrived for a news conference to describe some of his policies for helping Quebec’s families. Legault was flanked by two local female candidates. Behind him was a park in which a dozen photogenic and well-behaved children were playing on monkey bars. Behind the kids, parked a block away but easy to spot in any news camera shot, was Legault’s campaign bus. It was impossible to shoot video of Legault without taking in the whole gorgeous tableau: moms, kids, CAQ.

This is Legault’s third campaign as leader of the centre-right CAQ, a party that did not exist before he helped launch it in 2011. The CAQ exists to tap millions of Quebecers’ desire for a sort of dream state between the separatists of the Parti Québécois, who are often judged too radical, and the federalists of the Quebec Liberal Party, who are almost always judged too elitist. Legault is a former PQ cabinet minister, but it’s hard to hold that against him, since he now swears when asked that he would never hold a referendum on sovereignty. He’s a long-time business executive who founded the discount airline Air Transat, but he’s so doughy and low-definition, more Homer Simpson than Quebec Inc., that he’s never in danger of seeming elitist.

In the two previous elections, Legault contended at least briefly as a dark horse against the Liberals and the PQ, which have alternated in power for 48 years. Both times he fell short. If he loses again, it’ll be hard to justify sticking around for a fourth try, and his party will probably usher its founding leader toward the exit. If he wins, he’ll be the premier. Being this close to closure, of one kind or another, is a powerful source of serenity—especially since every poll this year has shown the CAQ ahead of Premier Philippe Couillard’s Liberals. I’ve followed Legault on previous campaigns, and I was struck by how good-natured he was on this morning.

The day’s policy was modest enough. Every party is specializing in modest policy this year. Legault wants to beef up a Liberal tax credit for families with children. The Liberals deliver $2,430 for your first child, at the lower end of the income scale, but only half as much for the second and third. Legault wants to offer the same amount for the second and subsequent children. “Does a second or third child cost less?” he asked. “Of course not.” Because Legault’s program, like the Liberals’, is means-tested and would offer less money to the most affluent families, the CAQ figure the total cost of the promise would be a reasonably affordable $700 million a year after a phase-in period.

The incumbent Liberals had caught wind of Legault’s announcement and tried to spin against it in advance. Wasn’t this guy trying to tell Quebec women to stay at home and have more children? Legault made a show of refusing to take the bait. “I won’t let myself be distracted by Liberal fear campaigns,” he said. “The goal is really to help families. If it has an effect on the choices families make, so much the better. But the goal is really to help families.”

The Liberals had aimed a few more depth charges at Legault. A senior Liberal cabinet minister had compared him to Donald Trump. What did he make of that? “Listen, the Liberals are panicking now,” Legault said. And, once again: he wouldn’t let himself get distracted by them.

A little more back-and-forth with the reporters, and the event was done. The upstart third-party leader was another day closer to… however this ends.

Perhaps the most striking thing about Legault’s Bromont appearance was how low the stakes were. A top-up to family allowances, visible only to families with two or more children and payable in full only to the families earning lower incomes, will get noticed by lots of voters. But it’s hardly the stuff of revolution. All three major parties are offering similar small-gauge promises this summer.

RELATED: The Bloc Québécois: What if Lucien Bouchard was right?

The next morning, I watched in a schoolyard in Yamachiche, just outside Trois-Rivières, while Couillard announced a handful of promises to improve Quebec’s schools. One of the promises was to eliminate testing in physical education in the primary grades. “Sports has to mean pleasure, not stress,” Couillard said. “Why have tests?”

It’s hard to argue with that. Liberating pre-teen students from pressure in the gym may be a cause that dozens of Quebecers can rally around. But one of the real challenges in this election has been remembering which party is proposing which programs. We’re very far from the days when the PQ was promising a secession referendum as soon as one could be organized, and the Liberals needed something big—hydro power from the province’s vast and rocky north, or a constitutional settlement for Quebec’s traditional grievances—to counter it.

What’s changed? Mostly the PQ. Lisée, a sharp-tongued former journalist, was a senior cabinet minister with a front-row seat to the debacle of the 2014 election, when the party lost power after only 19 months. The Liberals had spent decades honing their attack against the PQ. Every time the PQ promised competent government, the Liberals would remind voters that in reality, the PQ was a nest of separatists who were only too eager to ignore serious business in favour of crazy schemes and traumatic referendum campaigns. The PQ had no response, because a nest of separatists was, in fact, what most of the party’s activist base wanted.

So PQ leader after PQ leader had to do an endless two-step, reassuring lifelong Péquistes that sovereignty was the plan, while reassuring everyone else that it wasn’t. In recent years, all the Liberals had to do was point and laugh, and the PQ would implode.

Lisée decided to break out of that vicious cycle by getting the party to endorse a major feat of self-denial: The PQ would promise not to hold a referendum during its first four-year mandate in power. He’s stuck to that promise. And so far, the promise has pretty spectacularly helped—not the PQ, but the upstart CAQ. Through the campaign’s first week, polls suggested voters were on track to deliver fewer votes to the PQ than in any election since it was founded. But because they no longer need to stick with the Liberals to neutralize the PQ threat, more feel empowered to shop around. So more are planning to vote CAQ.

It’s an odd moment. Quebec may be on the verge of historic change—shutting down the PQ, installing a new party in power—but so far, no leader is offering oratory on anything close to the same scale. Probably for most voters this comes as a relief. Quebecers have been told their destiny was in their hands so many times. They were overdue for some ideas on fixing traffic and improving test scores.