Rachel Notley on why the NDP deserves a second chance

The Alberta premier talks to Jen Gerson about her economic plan, her working relationship with Justin Trudeau and what it will really take to get Trans Mountain built 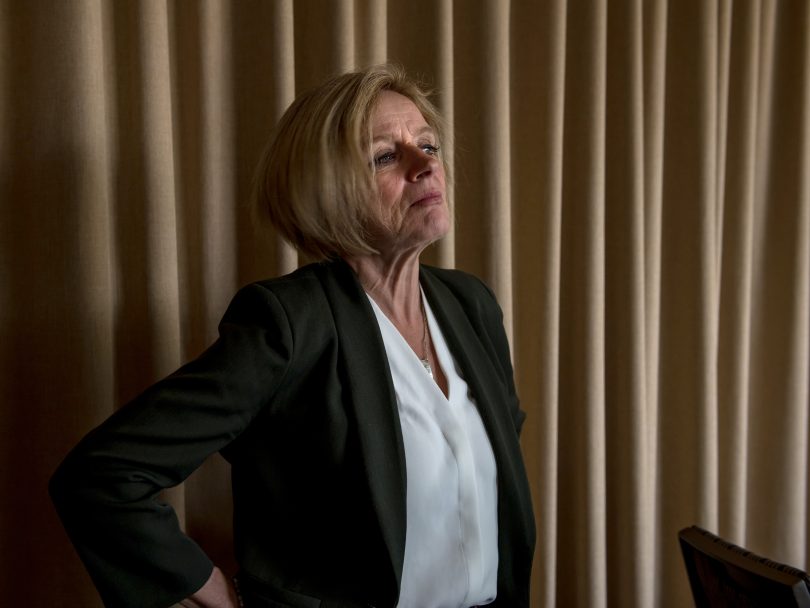 The Premier of Alberta Rachel Notley during her interview with Jen Gerson in Calgary, on April 10, 2019. (Photograph by Guillaume Nolet)

Only days before Albertans prepared to go to the polls, NDP leader Rachel Notley sat down with Jen Gerson to discuss pipelines, her political relationship with Justin Trudeau, and whether a province that has suffered four years of a stagnant economy under her government should give her party another chance. This interview has been edited for clarity and concision.

Q: As we all know the economy is struggling, particularly here in Calgary, the unemployment rate is still high. Why should Albertans give you another chance if things haven’t turned around in the last couple of years?

A: The key thing is we have an economic plan. We have a plan to balance the budget, we have a plan to create jobs and what Jason Kenney is talking about actually puts that in jeopardy on a number of different fronts. To the degree that he has a plan, people should be worried that it’s actually going to make the situation worse.

His whole plan is we’re going to give a massive, historic corporate tax cut and then new jobs will magically reappear. What we’re seeing across the board is that doesn’t actually work.

Contrast that with what we are focused on which is diversifying the economy as a whole and diversifying our energy industry so our diversification efforts can serve as a hedge against the drop in the price of oil.

RELATED: Rachel Notley fought like hell for Alberta, but the province isn’t about to thank her.

A: I do think it was the best move because we’re comparing it to what corporate income tax was before the price of oil went down. I think that we are getting more income through those increased corporate taxes than we would have had we not increased it. It’s very convenient for people to say ‘Oh, well the amount of the corporate income revenue went down.’ Well, yes, because the price of oil dropped by 70 per cent, so I do think it is the right thing and particularly when you compare it to overall we continue to be the most competitive place to do business by a long shot.

With the absence of a sales tax, we do have an $11 billion tax advantage over the next lowest tax province and those provinces have a whole series of other problems like housing and affordability. They struggle to attract people. We don’t have that problem. So we continue to be a great place to invest. The merits of this massive corporate tax cut when economists use it, it’s typically when you’re going from being over taxed to becoming competitive or really super competitive. When you’re going from already being competitive to more competitive, it doesn’t bring in the same investment.

Q: A future Alberta government, whether it’s yours or Kenney’s, is going to have to look at tax increases. Is that part of the conversation that you’re having right now?

A: We’re not. We’re still in the recovery stage and to be quite frank I’ve been very clear in this campaign that we’re not looking at increasing taxes outside of the pricing changes that would occur as part of the Climate Leadership Plan [the carbon tax], should the Trans Mountain pipeline get back under construction. We are very much hoping our personal income taxes and corporate income taxes, not the rate, but what comes in through our investment diversification.

Q: One of the things that Kenney keeps on coming back to is the Trudeau-Notley alliance. What is the nature of your political relationship with Prime Minister Justin Trudeau right now?

A: The nature of my relationship is one that you would expect to see between a premier of a province that is engaged in a determined, strategic, well informed, deliberate effort at advocating on behalf of the people of their province.

In his role as Prime Minister, Justin Trudeau has the authority to make critical decisions that have an impact on the people of this province therefore it is worth it for me to be able to engage in a conversation that doesn’t involve solely name calling and political grandstanding. We don’t always agree on things; I have called him out on things, but it is strategic. And it’s strategic to the long term goal. It’s not about using the relationship with the federal government as a political backdrop to my own political objectives, it’s about working the relationship with the long term objectives of what Albertans need from their federal government in line.

RELATED: Why being boring could work for Rachel Notley

It’s not an alliance and it’s not a war. It’s a mature intergovernmental relationship and, frankly, something that Albertans should expect from their leaders.

Q: Has the relationship gotten worse over time as things have become rockier over things like the stalled Trans Mountain pipeline?

A: I think it’s changed. It is not one particular line as it’s gotten worse or it’s gotten better. Sometimes it’s better and sometimes it’s more challenged. It depends on the issues as they come up, because we certainly don’t hesitate to call them out both publicly and privately. We need to advocate for Albertans.

Q: One of the criticisms that is lobbed against you is when you first came to power you opposed Northern Gateway. With the benefit of hindsight, do you regret opposing Northern Gateway?

A: I would say that to some degree yes. I realize now that I have a better understanding of the takeaway capacity needs and pipeline needs of our industry, and I realize now what we’re coming up against and we see what’s happened with the differential. And the degree of uncertainty when you’re dealing with Line 3 and KXL. You’re a hostage to U.S. fortune there.

What I will say is that most people who have really dug into the issue will agree that Northern Gateway was essentially dead before I was elected and before the Prime Minister was elected because of the depth and breadth of the judicial critique around everything associated with that application. Some would argue that [Stephen] Harper himself would do that.

That’s why I did what I did with C-48 yesterday [Notley opposed the federal Liberals’ bill which would place a moratorium on much oil tanker traffic along the northern section of the West Coast.] We know we need to get our products to different markets and going west is a good way to do that.

Q: What should the Alberta government do about C-48 and Bill C-69 (the federal government’s overhaul of the regulatory structure overseeing major infrastructure like pipelines)?

A: What we’re doing right now is we are working with many, many people. On C-69, we’ve worked with the industry, we’ve worked with other provinces to develop the suite of recommendations that would achieve the objectives that the federal government is trying to achieve, but at the same time provide the certainty that industry needs so that we don’t kill investment.

It’s the same kind of approach that will need to go ahead with C-48 in its current form. I’m not convinced that with the timing being what it is that it will. But if it is we’re just going to have to keep fighting and that’s exactly what we will do. We will get more information and align with more Canadians and we will push hard and leverage where necessary and do the things that a provincial government does when we need to push back on an ill-advised decision of the federal government.

Q: Do you think the federal government would shut down the Trans Mountain expansion if the oil sands emissions cap doesn’t go through (as per Jason Kenney’s promise).

A: Kenney is literally jeopardizing the pipeline at this point. Politics is politics, we’re going into a [federal] election period and so what the federal government is going to do is it’s going to listen to what voters want them to do in places where they need votes—B.C., Ontario, Quebec. I spent the last three-and-a-half years having a reasonable conversation with Canadians about the need for the pipeline.

If I’m not here and Jason Kenney is here and starts randomly trying to turn off the taps, creating massive amounts of investor uncertainty with that, by the way, and then demonizing Canadians outside of Alberta then I think the public support for the pipeline will start to go down.

RELATED: Rachel Notley on an economy that’s ‘being held hostage’, dealing with Trudeau and the next election

The federal government was clear that our emissions cap was part of their deal in terms of approving it. Mr. Kenney wants to blow that up for no apparent reason, so I think it’s a risk.

Q. Are you angry at Justin Trudeau?

A: No. I have no particular emotion one way or another. It’s a working relationship.

Q: After the 2015 election, you were pretty candid that you weren’t necessarily expecting to win. That this was something that happened by surprise. Are you expecting the win this time and are you prepared for that?

A: I’m super prepared. I’m very proud of the team we’ve pulled together, not to mention the team that’s running again. They’ve matured and handled the pressure of government [in a way] that should be inspiring to all people who want to get into politics, actually. Because there were some regular folks that stepped up to run because of what they believed in and they found themselves in positions that they didn’t necessarily expect to be in and they have all risen to the occasion.

But now, there’s no question that where we’re at from a party perspective, our organization so much better, our contacts, our reach, our engagement across the province; if there were a word I could use that would take it beyond qualitative, I would.

Q: What are you going to do if Jason Kenney becomes premier, what is your plan?

A: That is a hypothetical question that I am not interested in engaging in now because I’m still planning on being Premier.