'Racism is evil and those who cause violence in its name are criminals and thugs,' says Trump two days after demonstrations in Virginia 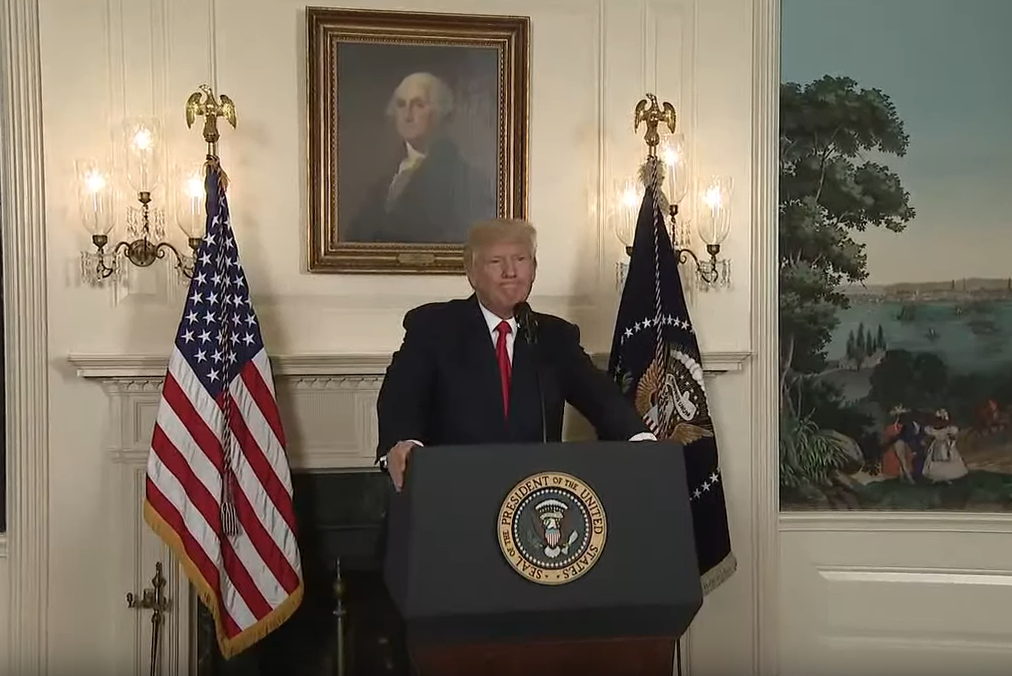 In a hastily arranged statement at the White House, Trump branded members of the KKK, neo-Nazis and white supremacists who take part in violence as “criminals and thugs.”

The groups are “repugnant to everything that we hold dear as Americans,” he said.

In his initial remarks on the violence Saturday, Trump did not single out the groups and instead bemoaned violence on “many sides.” Those remarks prompted stern criticism from fellow Republicans as well as Democrats, who urged him to seize the moral authority of his office to condemn hate groups.

Trump’s softer statement on Saturday had come as graphic images of a car plowing into a crowd in Charlottesville were playing continually on television. White nationalists had assembled in the city to protest plans to take down a statue of Confederate Gen. Robert E. Lee, and counter-protesters gathered in opposition. Fights broke out, and then a man drove into the opponents of the white supremacists. One woman was killed and many more badly hurt. Twenty-year-old James Alex Fields Jr. of Ohio is charged with second-degree murder and other counts.

Loath to appear to be admitting a mistake, Trump was reluctant to adjust his remarks.

The president had indicated to advisers before his initial statement Saturday that he wanted to stress a need for law and order, which he did. He later expressed anger to those close to him about what he perceived as the media’s unfair assessment of his remarks, believing he had effectively denounced all forms of bigotry, according to outside advisers and White House officials.

Several of Trump’s senior advisers, including new chief of staff John Kelly, had urged him to make a more specific condemnation, warning that the negative story would not go away and that the rising tide of criticism from fellow Republicans on Capitol Hill could endanger his legislative agenda, according to two White House officials.

The outside advisers and officials demanded anonymity to discuss private conversations.

Aides were dispatched to Sunday talk shows but struggled to explain the president’s position. A stronger statement was released — but attributed only to an unnamed spokesperson.

On Monday, Trump had planned to interrupt his 17-day working vacation at his New Jersey golf club to travel to Washington for an announcement he hoped would showcase some tough talk on China’s trade practices.

But by the time he arrived at midmorning, it was clear all other messages would be drowned out until he said more about Charlottesville.

Trump returned to a White House undergoing a major renovation. With the Oval Office unavailable, he worked from the Treaty Room as aides drafted his remarks.

Reading from a teleprompter, he made a point of beginning with an unrelated plug for the strength of the economy under his leadership. Then, taking pains to insist “as I said on Saturday,” Trump denounced the hate groups and called for unity.

“We must love each other, show affection for each other and unite together in condemnation of hatred, bigotry and violence,” he said.

Trump for the first time mentioned Heather Heyer by name as he paid tribute to the woman killed by the car.

At the trade event later in the day, he was asked why it took two days for him to offer an explicit denunciation of the hate groups.

“They have been condemned,” Trump responded before offering a fresh criticism of some media as “fake news.”

He followed with a tweet declaring “the #fakenews will never be satisfied.”

MORE: Trump blames ‘many sides’ for violent clashes in Virginia

His attorney general, Jeff Sessions, said earlier Monday on ABC’s “Good Morning America,” “You can be sure we will charge and advance the investigation toward the most serious charges that can be brought, because this is an unequivocally unacceptable and evil attack that cannot be accepted in America.”

In the hours after the incident on Saturday, Trump addressed the violence in broad strokes, saying he condemned “in the strongest possible terms this egregious display of hatred, bigotry and violence on many sides, on many sides.”

Trump’s initial comments had drawn praise from the neo-Nazi website Daily Stormer, which wrote: “Trump comments were good. He didn’t attack us. He just said the nation should come together. Nothing specific against us. … No condemnation at all.”

Though the Daily Stormer did not criticize Trump’s new statement, the Occidental Dissent, a white nationalist website, published a message saying whites had been “deserted by their president.”

Trump, as a presidential candidate, frequently came under scrutiny for being slow to offer condemnation of white supremacists. His strongest denunciations of the movement have not come only when asked, and he occasionally trafficked in retweets of racist social media posts during his campaign. His chief strategist, Steve Bannon, once declared that his former news site, Breitbart, was “the platform for the alt-right.”

Only late in last year’s campaign did Trump move away from his long-held questioning that Barack Obama was born in the United States, and even then he falsely blamed the origins of “birtherism” on Hillary Clinton.

Early Monday, the CEO of the nation’s third largest pharmaceutical company said he was resigning from the President’s American Manufacturing Council, citing “a responsibility to take a stand against intolerance and extremism.”