Is it possible that Stephane Dion has been prime minister for the last seven years without any of us noticing? 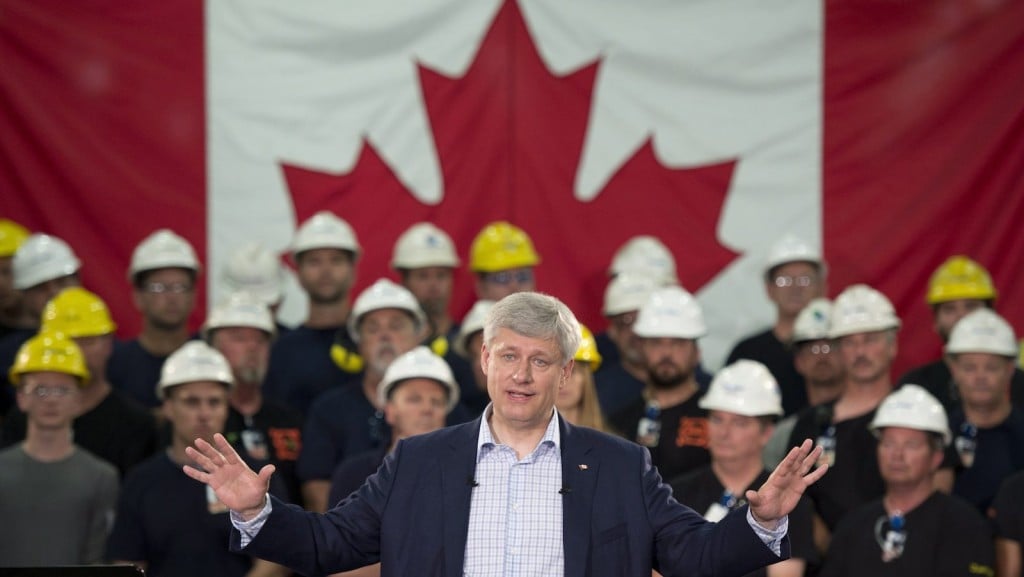 Prime Minister Stephen Harper speaks during a campaign stop at a steel manufacturer in Burlington, Ont., on Sept. 1, 2015 (THE CANADIAN PRESS/Adrian Wyld)

Is it possible that Stéphane Dion has been prime minister for the last seven years without any of us noticing? “The only way there is going to be a recession is if they’re elected,” a noted economist said at one point in September 2008, of Dion’s Liberals, “and that’s why they’re not going to be elected.”

A few weeks after that prediction, the Liberals were reduced to 77 seats. Despite the willingness and best efforts of the NDP and Bloc Québécois, Dion never got to be prime minister.

And yet, still, somehow, the Canadian economy ended up in recession. And now, Canada is—or, at least, was—in another recession.

Not that this more recent development is anything Stephen Harper wants you to worry about.

“Let’s be clear about what the data says today,” the Prime Minister said of new figures from Statistics Canada showing a second consecutive quarter of contraction in this country’s GDP, “the Canadian economy posted very strong growth in June.”

June was a lovely month, of that there can be no dispute. The weather was temperate, the days were long, the nation was soothed by the faint hum of economic expansion. Whatever comes next, for however long our hoarded canned goods and zombie repellent sustains us, we’ll always have June.

There was, similarly, some attempt this weekend to rebrand the first half of 2015 as a “discrete sectoral downturn.” But, by the letter of Harper’s own law—the Balanced Budget Act, neatly included in a budget bill that was officially tabled to implement the measures of a budget that might now be difficult to balance—a recession is defined as “a period of at least two consecutive quarters of negative growth in real gross domestic product for Canada, as reported by Statistics Canada under the Statistics Act.”

And that is what we now know we have had.

And so, now what?

It was the Prime Minister’s assurance this morning that we have many more Junes ahead of us—at least as long as we don’t do anything like elect a large number of New Democrats or Liberals.

“We will only realize those things,” he said of the good things that may come, “if we stick on a plan that involves having a balanced budget, good fiscal position, and we’re able to keep lowering taxes and we’re able to make sure we’re making wise investments in things that will grow our economy, like I’m announcing today.”

For the record, his announcements this day included an “Advanced Manufacturing Hub” and an “Investment and Trade Promotion Office.”

“That is the path that has made, through all of these ups and downs, the Canadian economy an island of stability,” he said. “We’ve had a couple of weak months.”

Well, five, to be precise. But who’s counting? (Aside from the nerds at Statistics Canada.)

Leadership, of course, means interpreting current events as confirmation of your world view.

“This morning,” Justin Trudeau said from an idyllic spot along the Ottawa River across from Parliament Hill, “Statistics Canada confirmed what I’ve heard from thousands of Canadians in every corner of this country.”

But what of June?

“The economy might look fine from 24 Sussex Drive, but, for millions of Canadians, it’s been stuck in neutral for a long time,” the Liberal leader explained. “And now,” Trudeau added, “it’s going backward.”

But what if I don’t believe that an automative analogy is the best way to explain our current situation?

Voters thus have their choice of metaphor.

That Dion has not been prime minister and that Canada has nonetheless experienced two recessions in the last seven years might suggest that a government has limited control over the fate of the national economy. But the public surely wouldn’t accept such a plea from a campaigning politician and, anyway, it’s far too late for any of the current particulars to start arguing as much; Harper has spent the last six years claiming credit for the economy’s successes, and now insists that slightly higher taxes, or slightly higher spending, would turn our “island of stability” into Greece. (Much as Andrew Leach has noted that the government’s opposition to regulations for the oil industry implicitly suggests the sector is very vulnerable, the Prime Minister’s fretting about economic catastrophe suggests the fiscal situation is perilously fragile—like a Fabergé egg in your grandmother’s living room that you’re only allowed to look at.) It’s obviously worth asking whether a Liberal or NDP government would have somehow avoided the Discrete Sectoral Downturn™ of 2015.

Which is not to suggest that our economic situation shouldn’t be a matter of concern (things seem less than ideal). Nor that an election result will be of no consequence (we now have three parties offering basically different platforms and priorities).

But a campaign is its own reality. Or, rather, a clash of competing versions of reality. Or, more accurately, a shared fever dream. It’s all hypothetical until the votes are cast.

On Oct. 1, 2008, three days after the U.S. stock market crashed, Dion announced a five-point plan to deal with the suddenly worrisome economic situation. He would meet with regulatory agencies, economists and the premiers, have the finance department prepare an update on the fiscal situation, and accelerate infrastructure investments. It was not exactly a comprehensive plan for steering the country through an economic shock. But, the next night, at the English-language leaders debate, Harper ripped into him from the opposite angle. “Obviously, economic uncertainty is the big question of this election, and Canadians are worried about the volatility in markets. What leaders have to do is have a plan and not panic,” the Prime Minister said, looking directly at the Liberal leader. “Last night, Stéphane, you panicked. You came on the set and announced a whole new economic plan in the middle of a national debate.” While also attacking the Liberal proposal for a carbon tax—probably a tough thing to be carrying into a recession—Harper said Dion would run deficits.

Less than two weeks later, the Conservatives won 143 seats. And, on the morning after that result, the Prime Minister announced he had a six-point plan that included a series of meetings and an economic update. Awhile later, after narrowly avoiding parliamentary defeat, Harper’s government came forward with billions for infrastructure as part of a $55.6-billion deficit. That despite, of course, the Prime Minister’s vow never to go into deficit.

In between dismissing Dion’s five-point plan and tabling his own six-point plan, the Prime Minister made an unappreciated foray into stock market analysis. In reality, it turned out to be good advice. In the moment, he was pilloried. So, then he started invoking his mother.

Then he accused the Liberal leader of acting in haste in deciding to run deficits.

Of course, an election is a question of reality, of how it is felt and how well politicians meet and define it. The only difference between yesterday and today is knowledge and perception. This recession is less a measure of GDP than a new idea of reality for the leaders to perform in front of.