In Lac Mégantic, there are no posters asking “have you seen?” There are no panicked people running around town, asking neighbours if they’ve gotten word from friends or loved ones. In the town of 6,000, everyone knows everyone. They know who is dead. They know who survived. They know those listed among the missing and they have little hope the missing will be found alive.

The streets downtown are quiet. Some residents were away on vacation when their city was destroyed. Others left town Friday night to stay with relatives. Residents gather near the street corner of Laval and Maisonneuve, watching journalists swarm politicians and safety experts who show up for press conferences.

Away from the intersection, elderly residents sit on their porches. Young adults meet up together at night, but there is no music being played, just beer and quiet chatter about those lost in the blast. At least 15 people are confirmed dead and officials say about 60 more are still missing after a train carrying 72 cars of petroleum careened off its track and exploded downtown early Saturday morning.

After a weekend staying at his parents’ place near Sherbrooke, the owner of the Musi-Café, Yannick Gagné, arrives at home on Monday night. The Musi-Café was near the centre of the blast. Gagné says there were so many he knew personally at his restaurant that night—waitresses, musicians, clients.

He talks about the babysitter who was watching his kids that night. “Her (the babysitter’s) parents were at my restaurant,” he says. “The husband left early, but the wife stayed. She’s still missing.”

Gagné pauses. “Everything is connected.”

As days pass, more people are allowed back into their homes. The rest wait at Polyvante Montignac secondary school, which has become an emergency shelter. Sleeping cots are lined up through the gymnasium and more beds spill into the hallways. The first night, the beds were full. By Sunday night, there were a few open cots as some people were allowed to return home. Dogs and cats are kept in cages throughout the school. One very tiny Chihuahua, named Nacho, walks freely in the gym with an owner standing close by. In the long thin cafeteria at the back, some residents chat amongst themselves. One elderly man works on a puzzle alone. The foyer is filled with volunteers ready to help with food, water, or a shoulder to cry on. On Sunday, there were 15 social workers present all day to offer counselling, and that wasn’t sufficient enough for the demand. An additional 10 were brought in on Monday.

Next to the foyer is a first-aid zone. Down the short hallway to the left, there is a television in front of several benches. The seats remain, for the most part, empty. The channel is turned to a French news station, which focuses almost exclusively on Lac-Mégantic.

Outside, journalists wait with TV cameras, ready to interview anyone who is willing to chat. On a rainy Tuesday afternoon, Karine Blanchette wears her Musi-Café uniform for the first time since the explosion—a black shirt with the logo on the front and back. “It was my second home,” Blanchette says, as she starts to choke up and cry. “Sorry. I just realized this morning what’s happened.” 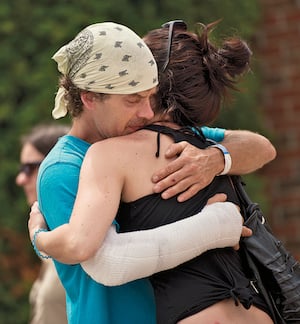 She was working the day shift Friday before the explosion. Three waitresses who worked the night shift are counted among the missing.

“I think the worst is coming,” Blanchette adds. “When the security perimeter is open, we will see our downtown and the nightmare will continue.”

The people of Lac-Mégantic are resilient. Residents of all ages congregate at the Tim Hortons and they are surprisingly jovial. Most haven’t seen the extent of the damage first-hand.

The renovated downtown, finished this spring, made the town a tourist’s paradise. Campgrounds were set up by the water throughout the summer. Now that water has been contaminated by thousands of litres of gas flowing from the derailed train cars.

The smell of fumes and gas fills Michel Morin’s long back yard, on the other side of the river from where the explosion occurred. His five-year old, Evan, runs around the above-ground pool trying to catch a cricket in a small plastic container. Ten-year-old Rebecca does cartwheels on a trampoline.

The yard continues further until it touches the Chaudière River. Morin walks down to the water by the rocks where he used to fish for trout with his kids. “We had a beautiful corner. We used to go kayaking,” he says. “We got all these things so we could take advantage of the nature. Now the nature is ruined.”

The water is green. Gas floats at the surface and circles by the rocks. Morin sticks part of his hand in and when he pulls it out, his hand has turned brown from the polluted water.

He fills up a plastic water bottle and brings it back up to his house.

“It’s the water,” he replies. Rebecca scrunches her face and opens her eyes wide.

It’s three days after the blast and Morin’s kids haven’t seen the damage to the river yet. “Since all this happened with the gasoline, I don’t want them down here,” he says. “It’s dangerous enough already.”