Jody Wilson-Raybould won't be involved in funding decisions affecting a B.C. non-profit run by her cousin 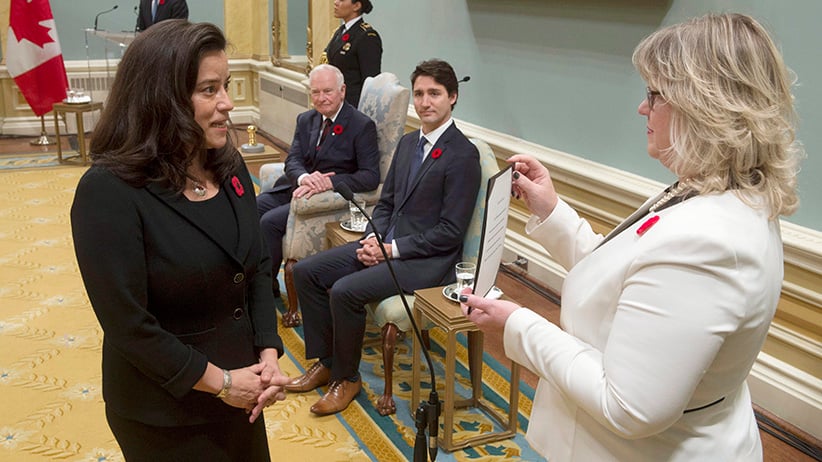 Governor General David Johnston and Prime Minister Justin Trudeau look on as Jody Wilson-Raybould is sworn in as the Minister of Justice and Attoney Gneral of Canada during ceremonies at Rideau Hall, Wednesday Nov.4, 2015 in Ottawa. (Adrian Wyld/CP)

OTTAWA — Justice Minister Jody Wilson-Raybould is being shielded from any funding decisions affecting a Vancouver-based, non-profit organization run by a relative.

“She proactively raised the issue and requested that appropriate measures be taken in accordance with the rules, obligations and guidance set out by the conflict of interest and ethics commissioner. Accordingly, a screen was put in place,” Ghiz wrote.

That makes the two women, who see each other maybe twice a year at family gatherings, first cousins — a relationship distant enough that Shackelly said she is surprised by the extra layer of scrutiny.

“If I was her sister, if I was her mother, father, maybe,” she said by telephone from Vancouver.

Shackelly said what makes it especially surprising is that federal funding for her organization comes through the Justice Department’s aboriginal courtwork program, which distributes about $5 million annually through contribution agreements with participating provincial governments.

The association, which helps indigenous peoples charged with an offence navigate the justice system, gets its contract from the provincial government.

“That’s as close as I get to the minister,” said Shackelly, who started noticing Justice Department officials bringing up the relationship a few months ago.

Wilson-Raybould came under fire this spring when the CBC reported she headlined a private Liberal party fundraiser at the Toronto office of Torys LLP, a prominent international business law firm.

Ethics Commissioner Mary Dawson said at the time there did not appear to have been a contravention of the Conflict of Interest Act.

The justice minister also faced criticism when her husband, Tim Raybould, registered as a lobbyist on behalf of clients for the KaLoNa Group, his private management consulting company in which Wilson-Raybould still holds a significant interest.

A conflict-of-interest screen, detailed in the public registry maintained by Dawson’s office, was set up to keep Wilson-Raybould away from anything to do with his clients.

On April 7, the same day as the fundraiser, a briefing note was prepared for the deputy minister of justice, with the title: “Ensuring No Conflicts of Interest Arise between Minister of Justice and the Native Courtworker and Counselling Association of B.C.,” according to a list of briefing materials tabled in the House of Commons in June.

Ghiz said the timing was a coincidence, as Wilson-Raybould flagged the family relationship soon after she was sworn in.

Ian McLeod, a spokesman for the Justice Department, confirmed Wilson-Raybould was the one who raised the connection to the organization, which has benefited from federal funding since 1995-96.

“Consequently, departmental officials offered a selection of possible solutions,” McLeod wrote in an email. “At this time, delegation for funding approval falls between the director general of the department’s programs branch and the office of the deputy minister, depending on the amount of funding; as such, the minister will not approve funding requests.”

As a cabinet minister, Wilson-Raybould is considered a public office holder under the Conflict of Interest Act, which forbids her from furthering her own private interests or those of friends or relatives, the definition of which does not specifically exclude cousins.

Jocelyne Brisebois, a spokeswoman for Dawson, said confidentiality rules prevented her from disclosing details of any possible discussions.

The public registry does not include any mention the Native Courtworker and Counselling Association of B.C.

Kathy Brock, a professor in the School of Policy Studies at Queen’s University, said that when it comes to conflict of interest guidelines, perception can be just as important as the reality.

“People don’t know whether the minister and her cousin have spoken yesterday or two years ago . . . so this is where the Justice Department would want to have very clear guidelines that put the minister above any actual or perceived conflict of interest,” said Brock.

“Those guidelines are tough to write,” she said.

Shackelly, who noted Wilson-Raybould is 20 years her junior, still thinks this is a stretch.

“I’m very proud of what she’s accomplished, but cousins are cousins,” she said.