Kathleen Wynne said she'd take the low road, but all party leaders should avoid the gutter

Our editorial: Voters should lament Wynne's decision to forgo the political 'high road' in favour of the nasty behaviour she decries in Ford 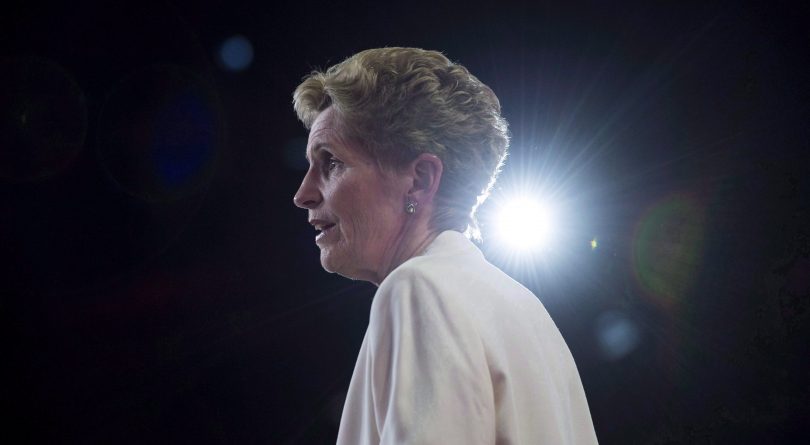 Last month, the increasingly embattled Wynne gave us a window into her evolving opinion on public discourse. “Michelle Obama, whom I admire greatly, recommended that when ‘they go low, we should go high,’ ” she said at a pre-election campaign event focused on Doug Ford, her main opponent in the June 7 provincial election. “I liked that idea when she said it—until we ended up with Donald Trump in the White House. So I’m sorry, but not again. Not here. Not in Ontario. I’m not going to go high.” She apparently intends to focus her campaigning efforts on hurling insults at Ford and his “ugly, vicious brand of politics.”

While Canada has largely avoided the intractable chasms of incivility that characterize politics south of the border, Wynne seems determined to take us there as quickly as possible with the comparison between Trump and Ford. Her decision to forgo the “high road” of political engagement in favour of the exact sort of nasty behaviour she decries in her opponent should be lamented from coast to coast.

READ MORE: Are you read for Premier Doug Ford?

Canadians deserve election campaigns that are respectful and focused on the relevant issues of the day. Elections should be a time for voters to engage in careful consideration of the successes and failures of the current administrations, weighed against the platforms and promises of their opponents. With apologies to former prime minister Kim Campbell, campaigns are most deﬁnitely “the right time to discuss serious issues.” Of course, personality and marketing matter greatly, but largely as a measure of credibility—to what extent do voters trust the politicians to act in the public interest?

Despite Wynne’s plans to the contrary, however, the upcoming Ontario contest promises to be both substantive and illuminating. Ford rejects carbon taxation and further minimum wage hikes, and vows to take a more business-friendly approach to governance. Many voters will ﬁnd this controversial. On the other hand, the Liberal and NDP platforms both commit to large and expensive new social welfare initiatives in areas such as daycare and pharmacare, as well as higher minimum wages and carbon taxes. (To her credit, NDP leader Andrea Horwath is promising to run a ‘high road’ campaign.) All this is equally provocative. The outcome of the Ontario election should thus hinge on the electorate’s opinion of two very different visions of the economy and government.

As we lament efforts to rob Canadian politics of its seriousness, we might also take a moment to mourn the loss of political lightheartedness as well. Humour was once a mainstay of campaigning politicians—our ﬁrst prime minister, Sir John A. Macdonald, was a master of the crowd-pleasing quip. Given the shrillness of social media today, however, it has become impossible for politicians to engage in wisecracks of any sort. When Justin Trudeau tried to break up a rambling town hall question earlier this year with a joke about “peoplekind,” he was roasted for insufferable political correctness. Similarly, when Ford made an offhand remark about the number of CBC reporters (lots) at the Ontario budget lock-up, he was criticized for not knowing his jurisdiction. The Charlottetown Guardian newspaper hysterically editorialized that “if elected premier, Ford is promising to defund the CBC.” A 131-year-old newspaper apparently can’t tell the difference between a riposte and a platform position. Such unthinking dourness is just as corrosive to modern campaigning as Wynne’s “low-road” promises.

An election is a conversation between politicians and the people who employ them. And like any important discussion, it ought to be respectful, thoughtful and thorough: there’s a big decision being made. But it also needs to be lively and engaging—we’re electing human beings, after all. Let them act it.