Rob Ford: In a just world, bobbleheads will roll

Ford has shown an obvious lack of respect for the office he holds, but so have his opponents in failing to take him to task 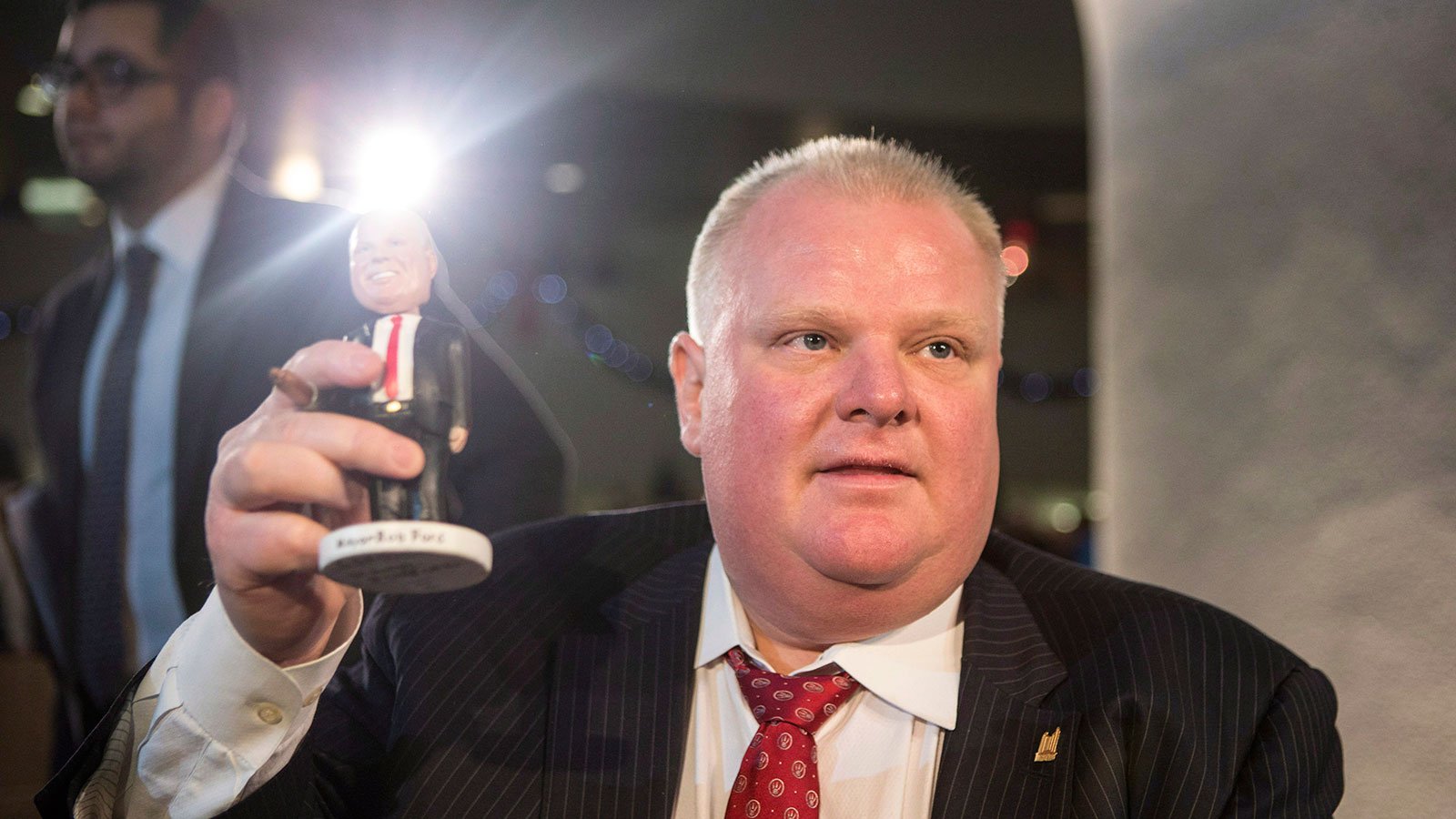 Earlier this month, in the spirit of Passover—the Jewish holiday that commemorates the events that would lead to God’s epic reveal of the Ten Commandments—Toronto mayoral candidate John Tory introduced some commandments of his own: a 10-point “code of conduct” detailing how he would behave as the chief magistrate of Canada’s biggest city. “I will respect and defend our laws, not break them,” he told media in a flat, measured tone not entirely dissimilar to the one emanating from the burning bush in Cecil B. DeMille’s The Ten Commandments. “I will show up for work each day to get things done, and I will do this in a transparent manner. I will always treat city staff with respect and professionalism. A mayor can be tough and decisive without being overbearing and brash.”

Tory’s ten commandments were reported in the news as “aggressive,” “elaborate” digs at Toronto’s sideshow Mayor Rob Ford; a man whose own code of conduct has popularized phrases like “drunken stupor.” That they were an attack on Ford is a no brainer: each of Tory’s commandments extols a virtue the mayor explicitly lacks. But “aggressive” and “elaborate,” they most certainly are not. (“I will show up for work each day to get things done” is hardly the beginning of an attack.) Unfortunately, the only thing aggressive and elaborate about Toronto’s mayoral campaign so far—the only thing that isn’t veiled, vague and innocuous about this election—is Rob Ford himself.

The mayor, annoyingly cocky in the face of a police investigation that has yet to result in criminal charges, has recently embraced the crudest and wackiest elements of his persona with apparent glee. Earlier this month, he proudly introduced two new campaign aides: disgraced Canadian Olympian Ben Johnson (who was stripped of his gold medal at the 1988 Olympics for doping) and actor Sam Tarasco, who plays a petty criminal on Trailer Park Boys. His official campaign launch on Thursday is expected to continue with the carnival theme, with the unveiling of a new line of Rob Ford bobbleheads; Ford fans and memorabilia collectors bored with the original bobblehead model can now purchase a Ford doll clad in his famous football-themed tie (the one he wore to the November scrum where he admitted to smoking crack), or the black, “magician”-style suit he wore on Jimmy Kimmel’s show when in Hollywood supposedly promoting Toronto’s film industry. In fact, just this week Ford joked around with the comedian on his YouTube show, Ford Nation. When Kimmel made a joke about his own drunken forgetfulness, the mayor broke into laughter and said, “I used that excuse one too many times myself.”

All the while, as this funhouse-mirror version of politics continues, Ford’s major opponents in the race, John Tory and Olivia Chow, have done nothing but skirt around the mayor’s record of public inebriation, drug scandal, and barefaced lies, conducting themselves as if it’s some kind of unspeakable health condition. The inaugural mayoral debate on City channel last month may have sounded at times like a disorganized shouting match, but more egregious, by far, was the candidates’ deafening silence about Ford’s scandals and half-truths. The only person in the room to mention the crack scandal was City reporter Cynthia Mulligan. John Tory’s sole attempt to take a dig at Ford’s personal problems getting in the way of his public service was a watered-down effort, met with the self-righteous scorn of Ford tsk-tsking that he would “stoop so low.” (Tory has made it clear from the start of his campaign that he will not be getting “personal” with Ford.)

Ford has shown an obvious lack of respect for the taxpayers he lauds and the office he holds, but Tory and Chow have shown disrespect too, for failing to take the mayor to task. Olivia Chow’s matronly disapproval isn’t good enough. Neither are John Tory’s tame 10 commandments. Now is not the time to take the high road (Rob Ford excluded). After all, the story of Passover isn’t merely about moral fortitude. It’s also a tale of revenge.