Rob Ford's back from rehab–but that misses the point

Sure, Rob Ford remains a contender to stay on as Toronto's mayor. But we need to remember rehab isn't a political cure-all. 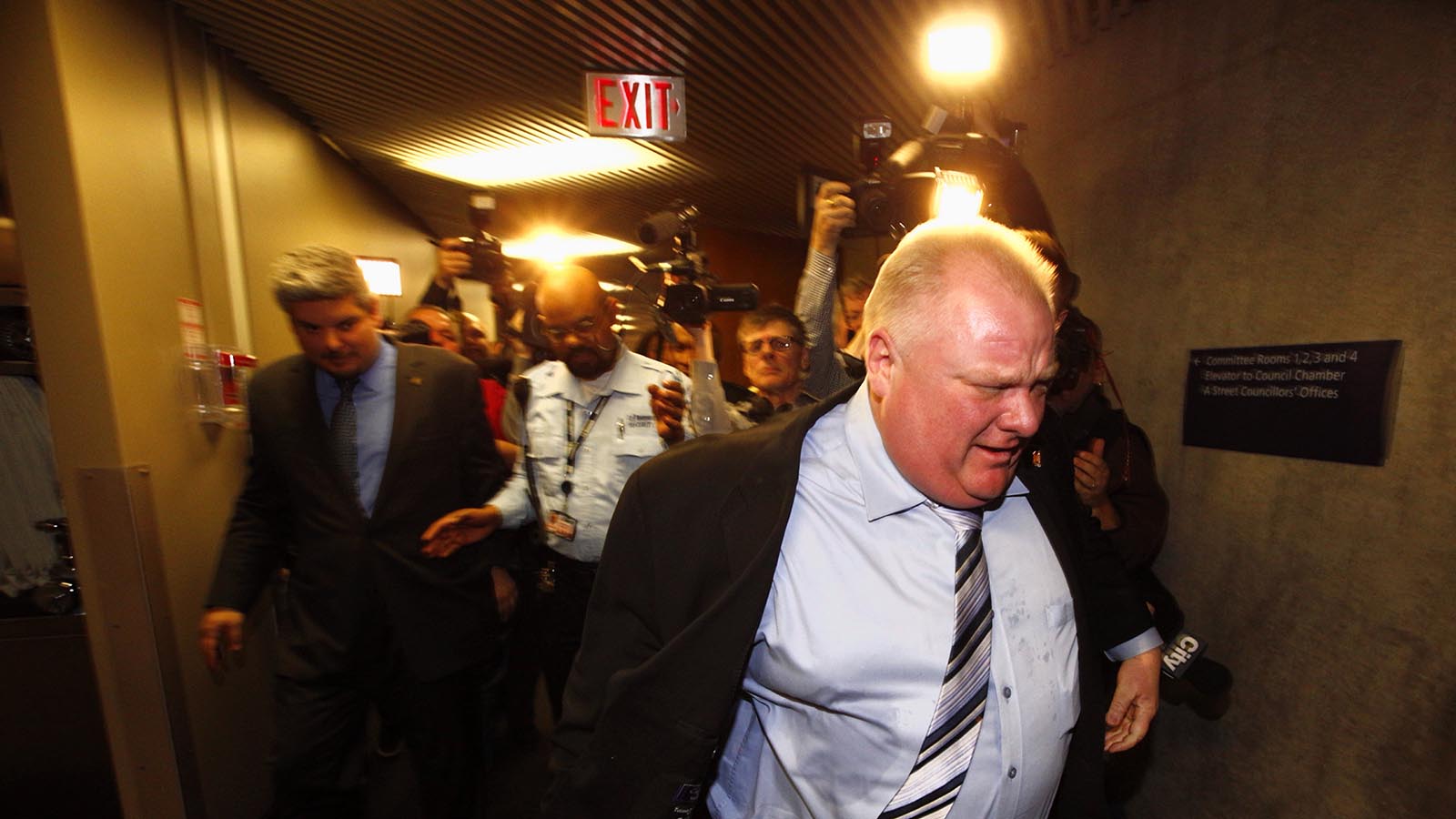 He’s baaaaaack. On Monday, Canada’s most controversial mayor returns to work—in the later part of the afternoon, of course—with city council facing two more meetings before the end of the season. The feeling is like a ticking time bomb—a feeling in no way allayed by Ford’s own campaign Twitter account, which has been breathlessly ticking down the days since June 10 with an ominous (and arbitrarily set) countdown.

Sure, there was that whole brouhaha when LeeAnne McRobb, a fellow rehabber who “borrowed” Ford’s car for an alleged impaired joyride into town—obviously, Ford couldn’t quit being in the media cold turkey—but otherwise, it’s been quiet, and actually kind of pleasant. In fact, during a major film festival, I spotted deputy mayor Norm Kelly and his wife, arm-in-arm, waiting for the light to change at one of the city’s busiest intersections, with nary a commotion in sight. It was, well, nice. And now we know what Toronto can be without the circus in town.

And yet, with the breathless premonitions of Ford’s return to Canada’s biggest city, the polling shows we missed the heck out of him. A new Forum Research poll showed that, in the six weeks since he left the public eye to seek help in a Muskoka addictions facility, Ford vaulted from third place, with a personal low of 24 per cent of people prepared to vote for him, back into second place, his 27 per cent now just below Olivia Chow’s 34, and siphoning support from John Tory, who fell to 24.

But caveat emptor: The polling was done by Forum Research, a pollster known for its friendly results for the Ford camp; his approval rating remained mired at 32 per cent, which is different from electability; John Tory’s internal numbers (also to be taken with a huge grain of salt) suggest Ford has 20 per cent of the decided vote, which is his bread-and-butter demographic; and, of course, here’s your quick reminder not to take the tea leaves for gospel: We’re four months into the race. Four months before the Ontario election, Tim Hudak had just announced his Million Jobs Act. There’s lots more game to be played before the whistle’s blown.

Nevertheless, it’s clear that Ford, despite it all, isn’t out of the race. Olivia Chow’s new radio commercials directly targeting Ford’s antics are proof positive that she’s not content to play out the string with a frontrunner’s campaign. And then there’s the fact that John Tory’s efforts at silent civility appear to be costing him support; if he expects to win Ford’s votes—a tactic key to any victory road map—he’ll need to adapt to the fact that even the most reasonable-minded people like a little bit of circus once in a while. But the numbers are more telling than just his return to contender status. For one thing, it would imply that it would be easier to vote for a tabula rasa than the man Ford’s proven to be. In fact, it’s telling that he enjoyed the uptick in support during a six-week period where he didn’t really make a noise—and, unfortunately for him, radio silence is not the standard pose of election campaigns. Add to this the fact that his campaign is disorganized (top advisers have decamped to other candidates) and suffering from low volunteer participation—according to everyone but campaign manager Doug Ford, who insists he has the “best ground game in the country.”

And, of course, as we wrote back in January, Ford’s ceiling remains imperiously, even unwinnably, low. The new Forum data found that 58 per cent still want Ford to resign, and while that’s down from 62 per cent, that’s a huge proportion of people who clearly wouldn’t vote for another four years of him. And, in a race this tight, with five reasonable contenders, 40 per cent of the vote is probably the magic number for victory. While 27 per cent isn’t too far away, it’s going to be nearly impossible to sway the minds of the 61 per cent who said back in December—when Ford’s numbers were riding fairly high—that they wouldn’t vote for Ford, no matter the circumstances.

Now the easy thing for us political watchers to do is to see if the rehab took. That’s going to be the easy prism through which we look at his return, and it’s exactly what the Ford campaign would want. But not only is that the insensitive thing to do (by what standards are we allowed to assess a man’s recovery?), it’s not sensible. It isn’t for us to judge a man’s struggles with addiction, especially since it’s so easy to forget that rehab doesn’t really operate with metrics of success; but it is for us to judge a politician on his capacity to lead, and to punish him for his capriciousness and deceptions. The issue has never meaningfully been Ford’s struggles with alcoholism, or any other substances, but his callow deflections of it, the racism, sexism and bigotry he spewed in his most belligerent moments, and the insistence that of course he’s fit to lead anyway. The issue wasn’t the wild night he allegedly spent with Justin Bieber at Toronto’s Muzik nightclub, but rather the fact that Muzik owners have become an influential lobby group at city hall ever since. The concern wasn’t really the crack directly; it was the fact that Ford denied it repeatedly and only sought help when it was proven that he succumbed again. The rest, frankly, is distracting window dressing.

Rehab is a potential salve for but one of the mayor’s issues. The program does nothing to cure Ford of the allegations by the Globe and Mail of abuse of power, questions he’ll be expected to answer upon his return. For all his imperfections, after all, even his staunchest supporters rooted for a man of the people who used his power to clean up city hall and do as he promised. If there is truth to the Globe report that Ford used his office to help companies tied to his family’s Deco Labels acquire city contracts, that’s something that is far more serious. On his addiction problems, he deserves a comeback story, as anyone would. On his political issues, he does not. We can, and should, believe in his personal redemption from a serious addiction problem without thinking that rehab can cure a broken politician.