The duchess of Cambridge is in labour and reporters are ready

Turning down Norfolk Place, the narrow road leading to the Lido Wing of London’s St. Mary’s hospital, the flustered journalist is greeted by a pulsing mass of iPhone-laden reporters. The duchess of Cambridge is about to pop. And on the hottest day of the summer thus far, we have gathered for what could be a very long wait.

Lining the street, across from the red-brick hospital where Kate, duchess of Cambridge, has been since around 6 a.m. local time, news teams from around the world have staked out territory. In between two long lines of metal fencing, sweating cameramen perch on tall stepladders and handsome, temperature-resistant television presenters prime for on-air hits. Where there is space, print reporters snake through with notebooks in hand.

West of the hospital, several patients in loose clothing and hospital bracelets smoke cigarettes and survey the brouhaha. Others fight their way towards the hospital entrance. Approaching the sliding doors, a 30-something blond woman in an arm cast is smacked on the head by a large news camera. “You just hit me on the head!” she cries. The offending cameraman looks away. “This is a hospital,” she quietly protests, shuffling away.

Not far from there, Maria Scott, 42, from Newcastle stands with her daughter Emma, 13. Both women have Union Jack flags tied around their shoulders. For two days, they have been camped out on the street, living in a small maroon tent, emblazoned with Will and Kate’s ubiquitous engagement photo. “It’s very hot in that tent,” Maria explains, “but it’s going to be worth it.” The space around them is cluttered with orange juice cartons and spare sneakers. At 10 a.m., Emma nurses a carton of strawberry ice cream, watching her mother wax rhapsodic through thick zebra-print glasses. Maria Scott gets bleary-eyed only once, when noting the absence of the late Princess Diana; “it’s tinged with a bit of sadness today.”

A few paces away, Terry Hutt, 78, from Cambridge sits on a park bench, also eating ice cream. He is wearing a Union Jack-patterned suit, tie and hat. Hutt has been sitting on that bench for 12 days running and he says he’ll stay for as long as it takes. “Women have hot flashes and men get butterflies” when “overexcited,” Hutt says, musing on the potential emotional state of Will and Kate. Hutt says he has managed to sleep quite comfortably on his bench—though sometimes tourists wake him up in the night to take his photograph.

At a cafe across the road, hoards of journalists seek refuge over iced coffees, fruit cups and ham paninis. For many, it has been a long haul; networks including the BBC have maintained an on-the-ground presence here since the start of July. Presumably, they have exhausted their material by now. A British journalist in a blue dress phones her producer to report that she has booked a psychologist who can speak on air about the psychology of pregnancy, as it might apply to the duchess. 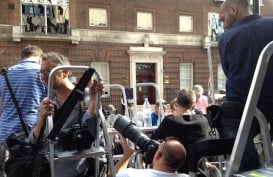 In the center of the café, sturdily built British cameramen from competing networks sit and talk. “I’m just overwhelmed with emotion,” one announces—to great peals of laughter.

Nicola McGeady, a well-heeled representative from Coral Bookmaker, makes the rounds, updating reporters on the latest betting stats. McGeady says that since this morning, more than £1 million has been bet on the royal baby worldwide. In sum: It’s 5:6 that the baby will be born tomorrow; 1:2 on it being a girl; and 7:4 on her being named Alexandra. “I’ve never seen so much money bet on a non-sporting event,” McGeady says.

As the hours pass, more tourists arrive to compete for limited pavement space. Anouk Zuijdenwyk, a teenaged tourist from the Netherlands, has been standing by with her parents and younger sister for several hours. She had intended to go shopping today, but finds herself captivated by the hectic goings-on. How long will she stay? “That’s still up for discussion,” interrupts her father, whose desperate urge to run for cover is palpable.

Walking east along the road, the crowd peters out. A hospital press officer hands out USB sticks containing background material to reporters. Another offers cookies and cold drinks. Under the beating sun, a Fox News anchor complains that her eyelashes have stuck together; a makeup artist rushes to her aid.

“Keep moving!” the crisply dressed police officers call out to the crowd. I turn to follow orders, but am sideswiped by a charging cameraman. I cry out in pain, attracting the attention of another cameraman with floppy hair. “I’m telling you,” he says, leaning in, “the people here are the worst kinds of people.”