Russia launches an attack on Ukraine 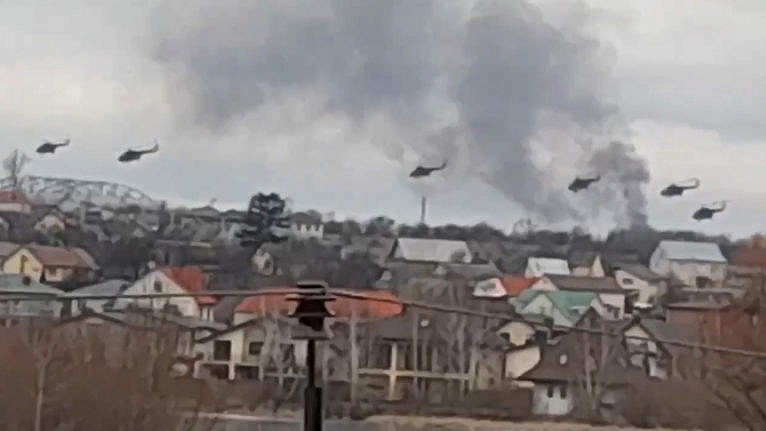 Ukraine invaded: Vladimir Putin launched a “special military operation” just before sunrise that appears to amount to an invasion of Ukraine, CNN reports.

An adviser for the Ukraine Interior Minister, Anton Gerashchenko, told journalists Russia’s “invasion has begun” with “missile strikes on Kyiv,” the capital. Gerashchenko said troops had landed in the city of Odessa and were crossing the border in Kharkiv, the second-largest city in Ukraine located in the country’s northeast. In a post on his Facebook page, he also said control centers such as airfields and military headquarters were being hit by shelling in Kyiv and Kharkiv, and that there was artillery fire along the border.

There were reports last night that Belarusian troops were joining the war, that Ukraine had shot down a Russian aircraft and videos and of traffic jams of refugees fleeing cities.

By early morning, the main airports in eastern Ukraine were closed after warnings were issued to pilots to avoid the airspace. In a video address, Mr. Zelensky said he had tried to call Russian President Vladimir Putin, but the Kremlin had not answered. “The Ukrainian people want peace,” Mr. Zelensky said after midnight in Kyiv. He spoke in his native Russian, but acknowledged that it was unlikely most Russians would hear his message via the Kremlin-controlled media. “Any spark,” he warned, “could burn everything down. You are told that this flame will liberate the people of Ukraine, but the Ukrainian people are free.”

Justin Trudeau denounced the invasion in a statement, promising “severe consequences.” CTV has a story.

Emergency over: The war in Ukraine overshadowed a significant, and perhaps not entirely unrelated Canadian story. Trudeau announced Wednesday that his government was revoking the Emergencies Act now that the convoy disruptions have been ended, CP reports: “We are confident that existing laws and bylaws are now sufficient to keep people safe.”

Regulations under the Emergencies Act granted powers to turn tow trucks into essential services, require banks to freeze accounts of people participating directly or indirectly in the protest and designate no-go zones for public gatherings, including Parliament Hill, border crossings and other areas deemed to be critical infrastructure. Police in Ottawa used those powers over the weekend to push demonstrators out of the core in a massive, multi-day operation. Downtown Ottawa remains under heavy police supervision. Checkpoints throughout the core, where the parliamentary precinct and surrounding streets are fenced off, are expected to remain throughout the weekend.

Conservative interim leader Candice Bergen questioned Trudeau’s decision: “Nothing has changed between Monday and today other than a flood of concerns from Canadian citizens, bad press and international ridicule. Trudeau introduced it in the first place for his personal political gain. He revoked it now for the very same reason.”

Overblown: In the Globe, Andrew Coyne writes that opposition critiques of the Emergencies Act appear overly dramatic and off the mark.

The argument that the police already had all the “new” powers granted them under the act is hard to square with the opposition’s other main line of attack: that by invoking the act the government had opened a dark and repressive new chapter in the country’s history; that martial law had been imposed; that Parliamentary democracy had been replaced by an authoritarian dictatorship to rival China’s. This was just remarkably silly – and looks even sillier now that the emergency is officially over. It was only declared on Feb. 14. To stay in effect beyond seven days required the support of a majority of MPs in a Parliament in which the government holds a minority. Even had it remained in effect after that, it would have expired automatically in 30 days – sooner, still, if a majority of MPs had voted to revoke it, as they could have at any time before then. The whole thing was subject to the Charter and is already facing two separate court challenges.

On the occupation: In Slate, Dahlia Lithwick has a detailed and thoughtful essay on the Ottawa occupation, comparing it to the march in Charlottesville in 2017.

Ultimately, it seems to me that the height of privilege lies in the belief that the thing you are demanding is what’s best for everyone, simply because you want it. It’s hard for me to recall another protest at which the protesters have clung so steadfastly to their belief that if they are unwelcomed by those they have disrupted, the remedy is to honk louder, turn up the music, and attack yet more mask wearers, all in the absolute conviction that they will come around to the belief that this is all a street festival, that it’s “fun” because you say so. To be sure, some of this is simply the privilege of being white, and some of it is the privilege that allows you to move through the world without fear, and the privilege that comes with being forever unconcerned about those you choose not to see.

On the other hand: Conservative Senator Denise Batters has a different perspective. She defended anti-vaccine mandate protesters in a Senate speech, arguing “friendly” and “patriotic” demonstrators have been unfairly maligned by the “chattering classes,” CBC reports.

Batters — who was photographed posing in front of convoy trucks gathered in Ottawa during the protest — said she didn’t experience any of the harassment that locals complained of during the weeks-long occupation. “I can say that in the last two years, I never felt safer walking home from my office at night. The protesters I met very much reminded me of the people I know in Saskatchewan — friendly, hard-working, patriotic Canadians,” she said.

“He will not sit idly by if Jean Charest enters the race,” certified a conservative source. However, the means that Mr. Harper intends to use to prevent the former premier of Quebec from leading a successful leadership campaign, if he decides to try his luck, remain unknown. Another source indicated that Mr. Harper remains convinced that Mr. Charest is too much in the center of the political spectrum, pointing out in passing his policies on carbon pricing when he was Premier of Quebec or his strong opposition to the dismantling the federal gun registry. “The boss is of the opinion that Jean Charest is not a real conservative,” offered a source who is well aware of the reasoning of the former Conservative prime minister.

Poilievre ahead: The clear frontrunner at the moment, and only declared candidate, is Pierre Poilievre. Strategists tell the Hill Times that he looks to be well-positioned.

Tim Powers, a conservative commentator and chair of Summa Strategies, described Poilievre’s strategy for the upcoming leadership race as one that aims to limit competition, “by demonstrating that he’s got a lot of support in caucus.” However, this approach doesn’t guarantee him the win, Powers said. He pointed to the 2020 Conservative leadership race in which Peter MacKay, a former longtime Nova Scotia MP, cabinet minister, and one-time Progressive Conservative leader, garnered more than 100 notable endorsements. In the end, MacKay lost the race to O’Toole, who was buoyed to victory, Powers noted, by the supporters of social conservative competitors Derek Sloan and Leslyn Lewis, who now represents Haldimand-Norfolk, Ont., in the House. Because Conservative leadership elections are decided by ranked ballot, Powers suggested that if an eventual competitor to Poilievre can position themselves as everybody’s No. 2 choice, they may be able to gather the majority of votes.