Jagmeet Singh nudged up his party's seat count, but must still figure out a way to differentiate his New Democrats from the Liberals 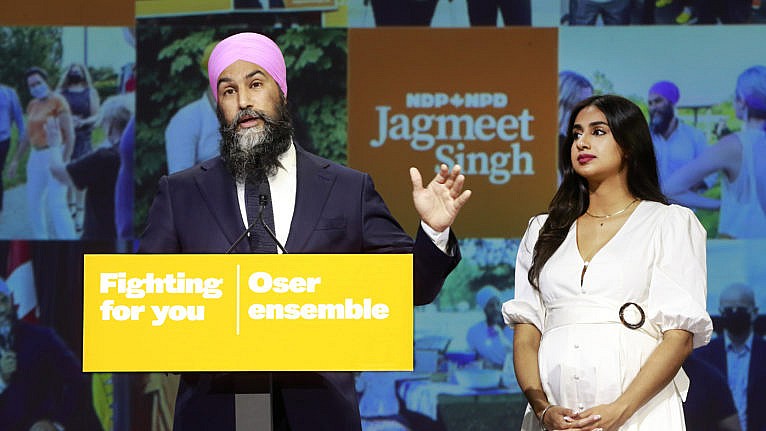 Singh stands with his wife Gurkiran Kaur Sidhu as he delivers remarks at his election night reception. (Jeff Vinnick/Getty Images)

In an election defined by stagnancy—where no other party appeared on track as of press time to gain or lose more than a couple seats in the House of Commons—the NDP leader appeared bolstered by his party’s modest seat gain (from 24 to 27 seats in Parliament as of this writing) and marginally improving their share of the total vote.

“We’re gonna go back to Ottawa with more New Democrat MPs,” says Jennifer Howard, Singh’s chief of staff. “And that was the goal from the beginning.”

Perhaps, but with pre-election polls suggesting Singh was within striking distance of winning well over 30 seats and eclipsing 20 per cent of the total vote share—a feat achieved only by iconic former NDP leaders Ed Broadbent and Jack Layton—fourth-place status in Parliament behind the Liberals, Conservatives and Bloc Quebecois will feel to many supporters like a letdown. Questions will surely be asked if the popular NDP leader is capable of getting them much further, not least because he has once again failed to make inroads in Quebec, the launching point of the NDP’s famous 2011 Orange Wave.

READ: That time when Erin O’Toole almost looked like the next prime minister

This calculation is more complicated than it sounds. In many ways, Singh remains the party’s biggest asset. He now has genuine name recognition and polls often rate him as the most likeable or trustworthy leader. “If you look historically at NDP leaders that did well, like [Ed] Broadbent and [Jack] Layton, they were both seen as trustworthy and genuine,” says Christo Aivalis, a left-wing political commentator and labour historian. “Jagmeet Singh shares a lot of those qualities.”

It’s why the party was keen to get him to visit 51 ridings over 36 days of campaigning, many of them constituencies where the New Democrats didn’t have an incumbent. He went to them as part of an aggressive effort by the party to grow its seat count.

READ: The election that disappointed everyone

The NDP also took a vastly different approach to targeting young voters. They built a fictional island on the hugely popular Nintendo Switch game Animal Crossing: New Horizons where gamers could be directed to the town’s bulletin board and read NDP campaign talking points. Less than a week before Election Day, 60,000 viewers watched as Singh played the video game Gartic Phone (think Pictionary meets Broken Telephone) on Twitch, the livestreaming platform popular within the gaming community,

“Singh is the leader out there who appears to be having the most fun,” says Karl Belanger, president of Traxxion Strategies and former national director for the NDP . “People can relate to that. They like that.”

But it’s one thing to attract and engage young voters online. The next hurdle is identifying them and getting them out to vote. “If you rely on organic voting, the conditions aren’t there for any kind of wave,” says Belanger, referring to the 2011 surge that vaulted the NDP to Official Opposition in Parliament. “Part of that is due to the pandemic.”

And no campaign runs perfectly smoothly. It was unlucky when his NDP-branded poutine truck hit a pothole and lost a wheel. It was unforeseen that two Manitoba First Nations leaders invited to NDP campaign stop would—while standing next to Singh—offer endorsements to a Liberal candidate. And it was “unacceptable,” as Singh put it, that two of his candidates had made antisemitic Twitter posts. (They resigned).

Singh, meanwhile, remained more focused on his talking points than he did during his previous election campaign. As Conservative leader Erin O’Toole tried to appeal to the trade workers and unions—a sector long considered the bedrock underlying the NDP base—Singh remained steadfast in his attacks on Trudeau. He focused his criticism on the Prime Minister at the leaders’ debates. He criticized Trudeau on Twitch. Even when Singh was visiting a riding where his party was in a close race with a Conservatives candidate, his comments were aimed at the Liberal leader.

Now the Liberals will likely need the NDP to advance their agenda, which will provide Singh some influence in the House of Commons. But should the Grits falter, presenting the New Democrats with an opportunity in an election, Singh will not have enough seats to join forces with the Conservative Party to bring the government down.

As things stand, it’s hard to imagine such a strategy would be in the party’s best interest: “Whatever position we’re in, we’re going to look to be constructive,” says Howard.

How, then, do they distinguish themselves in a minority parliament—a near carbon copy of the last one—without being perceived as an extension of the Liberal caucus? “It is challenging to balance that,” says Aivalis.  “Too much cooperation with the government and you often just look like them. And voters often punish the junior partner in a formal or informal coalition.

“If you don’t offer actual policies, it makes it difficult to then go to the voters after a few years and demand their vote. Simply saying they oppose the current government is generally not enough, especially for the NDP, because for them to grow, they will need to take votes from the Liberals.”

Aivalis suggests pushing policies that appeal to the broad progressive voting block, such as a wealth tax, for which polling shows broad support among Liberal and even the majority of Conservative voters. (Unlike the NDP,  neither proposed such a measure in their platforms.) “It’s important to keep offering policies and suggest to people that ‘we represent your values more than the party you actually voted for,” he says.

As Singh concluded his election night speech—highlighting his party’s planks to eliminate for-profit long-term care homes, implement universal pharmacare and impose a tax on the super-rich—he relayed a maxim he’d heard from his mom. “She always said that we are all one—and it’s so true. We are connected,” he said. “When we take care of one another, when we support one another, when we lift each other up, we all rise.”

No party rose to the occasion in this election, in the sense of expanding its power. But with the outcome clear, everyone on the NDP stage still got up and danced—into the night, and presumably, the weeks and months ahead.