Save NAFTA? Check. What's next for Canada's top trade negotiator?

Steve Verheul was away from home constantly during NAFTA talks. But he’s been putting the business back into business travel—just ask the Americans. 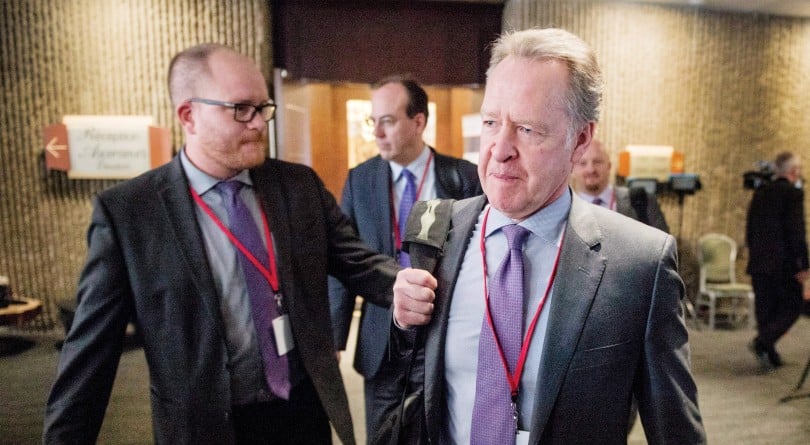 In the middle of marathon free-trade talks in the heart of Washington, months away from a new agreement and days before the U.S. trade czar said a deal was “nowhere near close,” Canada’s chief NAFTA negotiator was forced to switch hotels. Just before 9 a.m. on May 9, Steve Verheul checked out of the Marriott, a stone’s throw from the White House. That night, he stayed ﬁve blocks away at the Grand Hyatt.

“They didn’t even have hotels set up,” says Jerry Dias, the national president of Unifor, Canada’s largest private-sector union. Dias, who travelled to every round of negotiations and met constantly with Verheul on the road, says the Canadians would push through a logistical quagmire whenever they hustled to D.C., usually at the last minute: “Steve would be waiting and then the call comes, we’re heading to Washington tomorrow.”

Hotel receipts obtained via access-to-information provide a rare glimpse into the habits and movements of arguably the most important person to Canada’s future as a trading nation. Verheul is certainly the most enigmatic. Rarely in the spotlight and loath to speak much to reporters (he didn’t respond to numerous requests for this story), he emerges in the documents and other disclosures as just about the opposite of the archetypal jet-setting mandarin who swans through luxury hotels, checking off boxes at bilateral “working” lunches that yield no discernible result. On that trip in May, Verheul typically expensed nothing more fancy than the hotel Wi-Fi and ordered breakfast to his room each morning. He’s used to the hotel circuit. Before Verheul was tapped as Canada’s top NAFTA renegotiator, he spent years hammering out the Canada-EU trade deal. Federal travel expense records dating back nearly a decade show a man constantly on the move, spending about 20 per cent of his life outside Ottawa, where he lives. He picked up the pace for NAFTA, when one in every three days saw him somewhere away from home.

READ MORE: Canada’s next NAFTA ‘charm offensive’ won’t look like the last one

Martin Rice, the former executive director of the Canadian Pork Council, watched Verheul climb the ranks from junior public servant to chief agricultural negotiator—and then chief negotiator on two trade deals. “Going on a trade negotiation with Steve is not a basis for getting to know interesting places,” grumbles Rice, only half tongue-in-cheek. “There’s not a lot of wine and ﬁne dining.” The president of the Canadian Vehicle Manufacturers’ Association, Mark Nantais, recalled a NAFTA round in Mexico City when he grabbed a bite to eat at a local hole in the wall—nowhere extravagant. “Guess who walks in? Steve, 10 o’clock at night. It’s not a life of luxury,” says Nantais. “You’re just there to do a job.”

Verheul never gets far before lobbyists like Rice or Nantais catch up to him. Federal lobbying records show he had 229 meetings over the course of NAFTA renegotiations, including at least 68 with dairy representatives and 32 with the auto sector. Their descriptions of him are near universal: Verheul is accessible and likeable; serious and poker-faced. And he’ll meet with any industry rep with a stake in the talks. Mathieu Frigon of the Dairy Processors Association of Canada was almost shocked at all the face time he racked up. “I was named CEO in 2018. It’s not like I’m a big name in Ottawa,” he says. “But he was so available.” Frigon scored a meeting with Verheul on Oct. 1, while the ink was still wet on a new trade pact announced late the night before. “Maybe at that time he hadn’t slept in 72 hours, but you couldn’t tell,” says Frigon. “It would have been really easy to cancel that meeting.”

Verheul has even impressed those on the other side of the negotiating table. Kelly Knight Craft, the U.S. ambassador to Canada who sat in on almost every Canada-U.S. encounter, told Maclean’s that Verheul is a “great listener,” even during tense talks. “He is so soft-spoken that it naturally causes the people around him to listen more, to be more attentive,” she says. “You really lean in.” Craft described a negotiation bordering on sedate. “If there was a dispute, it wasn’t outwardly shown. Everybody would go back to the table. They would discuss it very cordially, with respect.”

RELATED: How NAFTA was saved: The bitter fight and the final breakthrough

Dias, the union boss who regularly made headlines with sharp-tongued critiques of American negotiation positions, characterizes his own role as the Mr. Hyde to Verheul’s Dr. Jekyll. He says they traded notes daily on the various bargaining positions of the moment. “He was completely transparent with me. There was no holding back,” says Dias. “We would talk about when it would make the most sense for me to lead with my chin at the press conferences. He was mainly the guy who was loading the gun. I was ﬁring the bullets.”

The new trade agreement faces an uncertain future in Washington, with many Democrats dismissing it as a flawed deal that will still bleed jobs to Mexico. Whatever its fate, Verheul emerged from the negotiations having angered basically nobody—including auto sector executives and the union boss representing their workers. So what’s next for him? “He could save the WTO,” quipped Maryscott Greenwood, the CEO of the Canadian-American Business Council, in reference to the World Trade Organization that’s in Trump’s crosshairs, and increasingly taxed for resources.

“Steve Verheul could quite likely quadruple his wages if he went to the private sector,” says Dias. “If he went out on the open market, Fortune 500 companies would trip all over themselves to hire him.” As it stands, there’s no indication Verheul has any desire to leave the public service. Besides, even when Trump’s team isn’t staring him down, there’s always another deal to be made.