Tobias Enverga Jr., the first Filipino-Canadian to sit in the Senate, has died at age 61 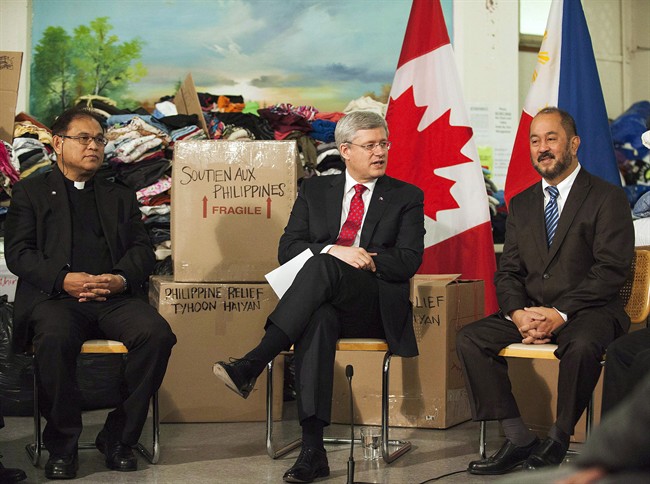 Then Prime Minister Stephen Harper announces further Canadian support for the Philippines in the wake of Typhoon Haiyan alongside Father Ben Ebcas of the Our Lady of the Assumption Catholic Parish, left, and Senator Tobias Enverga, right, in Toronto on Monday November 18, 2013. THE CANADIAN PRESS/Aaron Vincent Elkaim

OTTAWA – Tobias Enverga Jr., the first Filipino-Canadian ever appointed to the Senate, has died while on a parliamentary visit to Colombia.

Conservatives on Parliament Hill flooded social media with condolences upon hearing the news.

“The tragic loss of his welcoming and sunny personality leaves a large hole in the lives of all who knew him,” Conservative Leader Andrew Scheer said in a statement.

Heartbroken to hear of the untimely death of my friend Senator Tobias Enverga. Thoughts and prayers with his colleagues, friends and family.

Prior to beginning his political career, Enverga worked as a project manager for the Bank of Montreal, but was best know for his work on behalf of the Filipino community, including establishing the Philippine Canadian Charitable Foundation, Scheer noted.

He later became a Toronto Catholic School Board trustee before then-prime minister Stephen Harper named him to the upper chamber in 2012.

“Sen. Enverga was the kind of person who could make anybody feel welcome and valued, a quality that is so important for those who act as ambassadors for communities of new Canadians. He embodied what we all want to see more of in public life.”

Enverga’s fellow Conservative senators Linda Frum and Dennis Patterson tweeted their shock and heartbreak over the death of their good friend.

Conservative MP Erin O’Toole called him a role model and leader in the Filipino community.

Enverga, who was known as Jun, will be remembered as a fierce advocate for persons with disabilities and a tireless champion for multiculturalism, said Senate Speaker George Furey.

“He was respected by all of his colleagues for his kindness, his warm sense of humour and his unparalleled work ethic,” Furey said in a statement.

Enverga emigrated to Canada after earning a bachelor of arts degree in the Philippines. He took an MA at York University and his tenure at the Bank of Montreal lasted for three decades.