How data-driven election campaigns are short-circuiting the political conversation 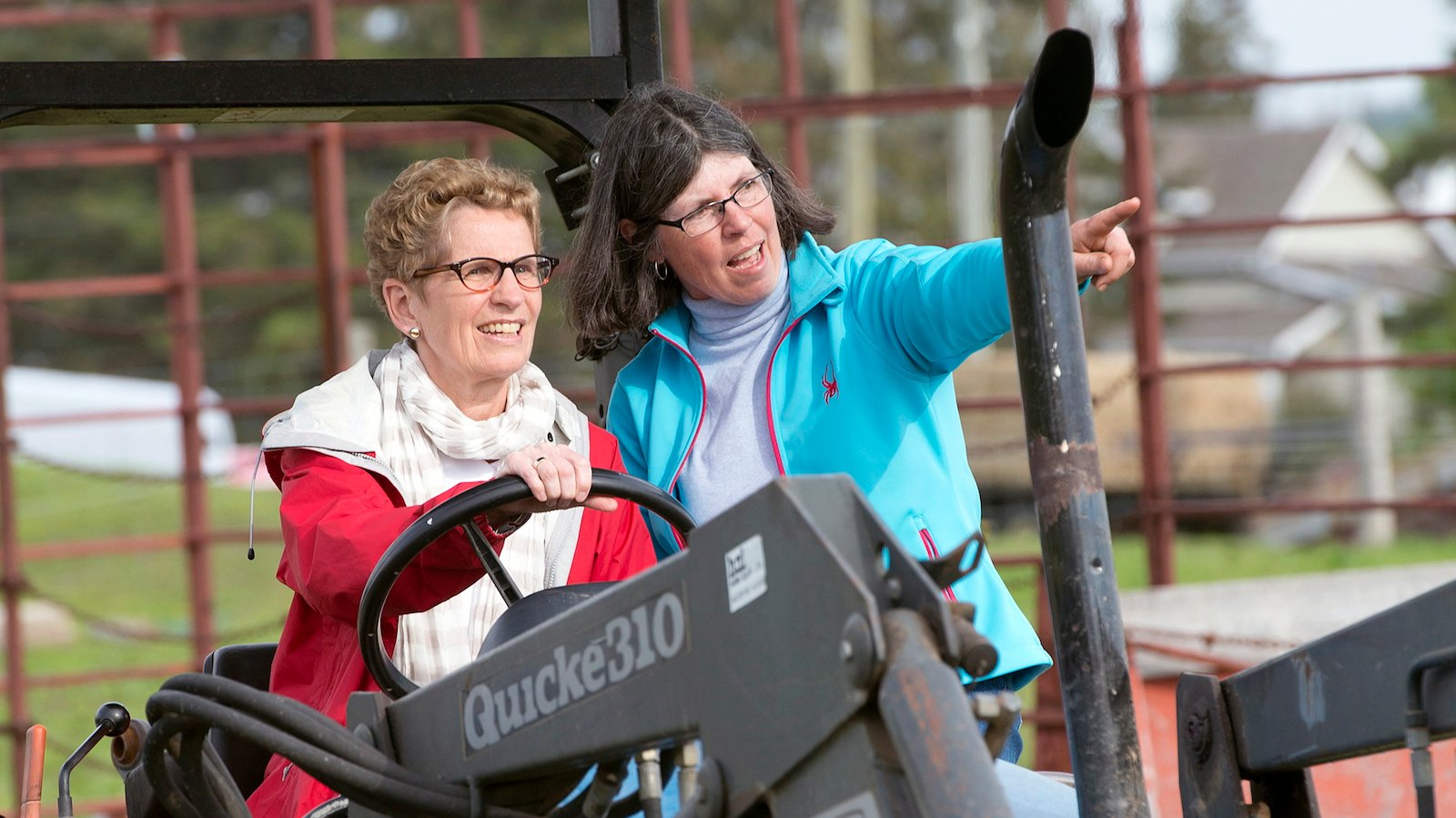 Ontario Premier Kathleen Wynne drives a tractor with instruction from farmer Sandra Vos (right) at a campaign event in Paris, Ontario on Tuesday May 20, 2014. (Frank Gunn/CP)

You’ve probably heard the tale of the football coach who confronted an uninspired player during practice. “Son,” he asked, “are you stupid, or just apathetic?”

“Coach,” replied the player blandly, “I don’t know, and I don’t care.”

The line’s too good be apocryphal, so I’ve wondered at times who that smart-ass might have been. Maybe his name was Ontario Voter. The current provincial election campaign, after all, has unfolded amid epic levels of ignorance and disinterest that point to another all-time low in voter turnout. In a telling lowlight, early in the campaign, CBC randomly ambushed more than a dozen citizens on a downtown Toronto street, challenging them to name the leaders of the major parties. Only one could identify all three.

Two weeks later, the network tried again and the results weren’t much better. A few could name Andrea Horwath of the NDP, Tim Hudak of the Progressive Conservatives and the Liberals’ Kathleen Wynne, but almost none could identify the parties’ major policy planks. When asked which leader was touting the Million Jobs Plan, one man replied: “That sounds like an NDP initiative.”

(It’s Hudak’s policy, for the record. If you’re from Ontario, and you didn’t know, don’t sweat it. You’re not alone.)

This would be less disturbing were it manifestly a product of public frustration with failed policies, or with misconduct on the part of elected leaders. But these days, few Ontario voters seem all that upset, even with the scandal-ridden Liberals, who are, somewhat improbably, polling neck-and-neck with the Tories. Really and truly, we’ve dialled out.

Ontario’s not alone in this regard. Voter turnout has more or less been in decline in federal elections since the mid-1960s, when it reached the high 70s for three straight elections. The 61.1 per cent who cast ballots in the 2011 election were part of the third-lowest turnout in Canadian history.

This has already triggered debate over the whys and wherefores of voter apathy, with attendant suggestions on how to re-engage people in the political process—especially the young. Some will argue for electoral reform. The first-past-the-post system, they say, leaves many people feeling as though they’ve thrown their votes away—which is true. But that didn’t stop nearly two-thirds or more from voting in past Ontario elections. How, then, have we sunk to less than half?

I blame the nerds. Over the past two decades, campaigns have become increasingly data-driven, by which I mean parties have become a lot more interested in identifying their existing supporters and making sure they vote than they are in winning new ones. A couple of weeks ago, senior campaign aides with both the NDP and the Tories described to me the astounding depth of their voter databanks, which help them tailor policy in ways that will motivate their support base to go mark an X beside their candidates’ names. Following the lead of U.S. parties, they’ve increasingly turned to consumer data—what kind of car a voter drives; what magazines she reads—to identify loci of probable support.

It’s smart politicking, but the effect has been to short-circuit the political conversation that, at least notionally, is the reason we have campaigns. Over the weekend, for example, I received calls from all three parties in my west Toronto riding asking if they could “count on” my support. When I (politely) said no, all three cheerfully rang off. No request to explain why. No offer of a follow-up call. Not so much as an expression of regret.

Clearly, the big brains in the campaigns figure their time is better spent getting sure votes to the polls than trying to persuade a Jeez-I-dunno. That is especially true in the three-party race, when a mere plurality of votes—as opposed to a proper majority—can win you a riding.

But it means the quaint practice of talking policy on the doorstep is dying. And while that spares us the risk of missing key moments of the Stanley Cup playoffs, it deprives us of a useful democratic exercise—namely, face-to-face conversations with those who might not share our views. Instead, the parties prefer to direct narrow, carefully calibrated messages at their most reliable supporters. Then they dispatch ground armies of volunteers out to make sure that minority votes. Recent history suggests that’s the most efficient path to victory.

Yes, things are different if you happen to live in a swing riding, capable of changing the presumptive seat count. In those places, as the Globe and Mail‘s Adam Radwanski points out today, low voter turnout has created enormous uncertainty. The parties will be desperately working those neighbourhoods, in hope of harvesting precious votes.

As for the rest of us, well, chances are, we changed the channel, mentally speaking, a long time ago. And here lies the comic twist: With so few of us coming to the polls, each vote is worth more than it has in decades. Never mind who’s to blame for the current malaise. If we can’t be bothered to vote now, then we’re in no position to laugh at that football player.