Election Image of the Day: Inviting hecklers to block access to hospitals—sarcastically or not—is a bad look for the Liberal leader 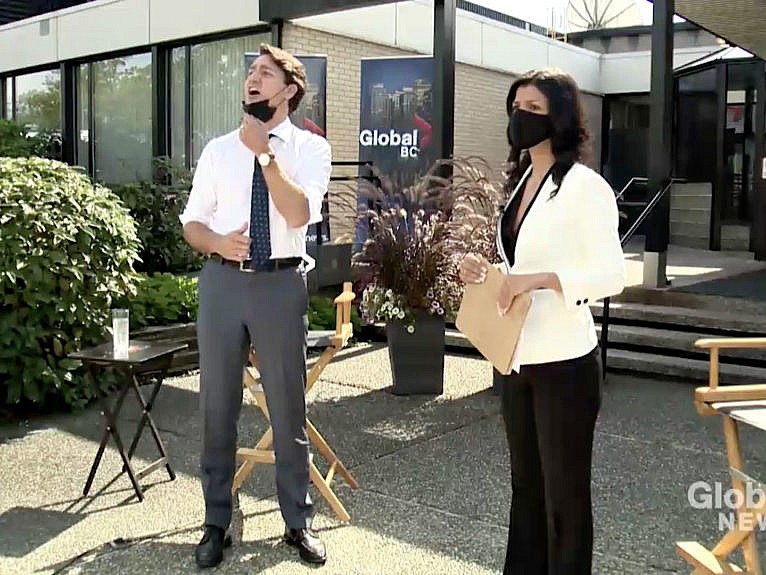 Prime Minister Trudeau lowers his mask to yell at a protestors ahead of an interview with Neetu Garcha outside Global BC's station in Burnaby. (Courtesy of Global News)

Prime Minister Justin Trudeau seems a very different man than he was at the beginning of this election campaign. Back in those sunny mid-August days, riding high on soaring approval numbers, he breezed past protesters, occasionally tossing out a shout to “please get vaccinated,” but otherwise remaining positive and aloof. Over time, as his poll numbers deflated and his campaign kept getting interrupted, his composure has visibly deteriorated. Protesters have dogged him at virtually every leg of his national tour. They have thrown gravel at him. He’s cancelled events because of them. Yesterday, while preparing to sit down for an interview with Global News in Burnaby, B.C., an angry man stood on the sidewalk, yelling obsenities about Trudeau and his wife while blaring Twisted Sister’s “We’re Not Gonna Take It.” In fact, it was Trudeau who wasn’t going to take it anymore: after a long, unblinking stare, the Liberal leader lowered his mask and shouted back, “Isn’t there a hospital you should be going to bother right now?” Perhaps having realized he’d just sunk into a shouting match with a streetside boor, Trudeau raised his mask and stood silent for a long time, trying to appear calm to everyone else around him. Liberal supporters may applaud their leader’s backbone; critics point out the that any level of irony is too high for protesters of this ilk. Indeed, it feels wrong to hear the country’s leader suggest an aggressive stranger actually go protest in front of a hospital. But a man can only stay on message for so long. As Trudeau himself said after finally sitting down for his interview with Global, “It is what it is.”