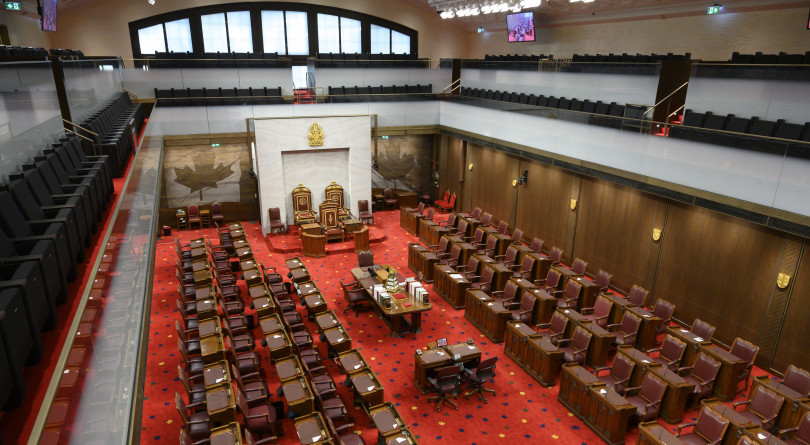 The Senate of Canada building and Senate Chamber (Sean Kilpatrick/CP)

Encana doesn’t want to be Canadian anymore, and Trudeau shrugs: Encana’s decision to move its base from Calgary to the U.S. touched off a battle of interpretations as to whether it was a reflection of Justin Trudeau’s reelection and his policies, or the result of years of missteps and poor decisions on the part of the company’s management. Whatever the case, there is no question Encana’s actions come as a symbolic blow to Alberta’s oil patch at a time when the West is grappling with feelings of anxiety and alienation. Jason Markusoff unpacks the significance of Trudeau’s non-reaction to Encana’s farewell:

It was the first major howl of pain to ring out from Alberta since, well, last week’s federal election—the one that seemed to affirm that Justin Trudeau and the Liberals need be more responsive to to the troubles and anxieties in the oil-producing Prairie provinces. Which made Encana-gone-Ovintiv’s announcement the first post-election test for Trudeau. And his team blew it.

Trudeau, busy playing cabinet fantasy draft ahead of Nov. 20, did not come out to speak, nor put out a statement, nor even  tweet on the news. When CBC’s Power & Politics pursued a Liberal guest Thursday to react, nobody was made available, host Vassy Kapelos reported on-air. Natural Resources Minister Amarjeet Sohi (who is booked for the show Friday) lost his Edmonton seat, along with all other Liberals in Alberta and Saskatchewan.

But nobody? All Kapelos, or others, got was a statement from a Natural Resources press secretary. It spends fewer paragraphs expressing disappointment or reflecting on the significance of this move than it does extolling the accomplishments of the Trudeau government on pipelines and investments—the concrete measures that have proven insufficient to bring pipelines to completion or create a solid investment climate. Read more ››

Maybe a new pipeline could win federal approval after all: To angry western politicians Bill C-69, which reforms the environmental assessment process for big infrastructure projects, is a roadblock to getting future pipeline projects approved, while the Liberal government claims it clears up confusion that in the past resulted in delays from court challenges. John Geddes looks at who’s right:

University of Calgary law professor David Wright said there’s nothing in C-69 that justifies making it a “lightning rod” for Western alienation. But Wright added in an interview that industry has some grounds for worrying that it might open the door to new sorts of legal challenges. For instance, the law specifies that an impact assessment must take into account “the extent to which the effects of the designated project hinder or contribute to the government of Canada’s ability to meet its environmental obligations and its commitments in respect of climate change.” One way to interpret this new requirement is that project might be rejected solely because it would generate a lot of emissions.

But Wright said draft guidelines the federal government is now circulating show that’s not what the Liberals have in mind. They propose that a company pitching a new pipeline, say, or a mine expansion, would have to tally up future emissions from the project. Those emissions, however, wouldn’t have to be squared with Canada’s overall emissions-reduction commitment under the UN Framework Convention on Climate Change. “All you have to do to pass muster is some straight arithmetic about emissions your project will result in,” Wright said. “As long as you’ve done that, that’s handed over to cabinet to make a decision.” Read more ››

51 and 52?: Meanwhile, the Wexit movement trundles along. Over the weekend 700 people gathered at a rally in Edmonton, complete with upside-down Canadian flag, Make Alberta Great Again caps and plenty of angry rhetoric about “taking power back.” And while trade experts argue it is a pipe dream to think an independent but landlocked Alberta will find it any easier to move oil out of the province, maybe another solution could simply be for separatist provinces (Alberta, Saskatchewan, Manitoba and the interior of B.C.) to just join the U.S., as a pair of American policy wonks wrote in The Hill: “If these provinces did seriously push for separation, and they were willing to entertain the invite, the United States would be smart to welcome them with open arms. We’d surely benefit by adding these four stars to the U.S. flag.”

A voice from the Chamber: With Trudeau trying to figure out how to give voice to Western concerns when the Liberals don’t have any MPs there, a group of mostly Western, mostly Conservative senators are set to form a new caucus to represent the region in the Upper Chamber. The Tyee reports the new caucus could be announced today, and would see between nine and 12 senators from the Conservative caucus, former Conservatives, Independents, and one former Liberal, join forces. With at least nine members, the caucus will get a research budget, staff, seats on committees and more opportunities to be heard in Question Period, which is currently dominated by the Independent Senate Group.

Reaching out: To maintain their respective grips on power two leaders reached out to those disappointed by the outcome of last month’s election — Trudeau to opposition leaders, and Andrew Scheer to defeated Conservative candidates. Trudeau is set to meet with Scheer, Yves-François Blanchet, Jagmeet Singh and Elizabeth May during the week of Nov. 11 and he’s likely to appeal to each on different grounds — the NDP for social issues, the Tories for fiscal issues, the Conservative strategist Neil Brodie told CTV: “Trudeau has enough dance partners in the House of Commons to move an agenda forward.” As for Scheer, the Toronto Star cited a Conservative source who said he appeared “wobbly” in his meeting with defeated candidates and unsure about the impact in-party fighting could have on his wife and children, though other Conservatives told the paper Scheer is up for the fight.

Much ado about meddling: If it seemed like there were a lot more warnings in the media about foreign trolls interfering in the election than actual trolls interfering, that’s because anxiety outstripped reality. Three research teams aimed at tracking foreign influence found more news reports warning about foreign social media ne’er-do-wells than actual malicious activity. “We didn’t see high levels of effective disinformation campaigns. We didn’t see evidence of effective bot networks in any of the major platforms. Yet, we saw a lot of coverage of these things,” Derek Ruths, a professor of computer science at McGill University in Montreal, told CBC.