Sorry, you cut out there: Electioneering in the COVID era

Election Image of the Day: In this campaign, the stump is a stool in front of a screen 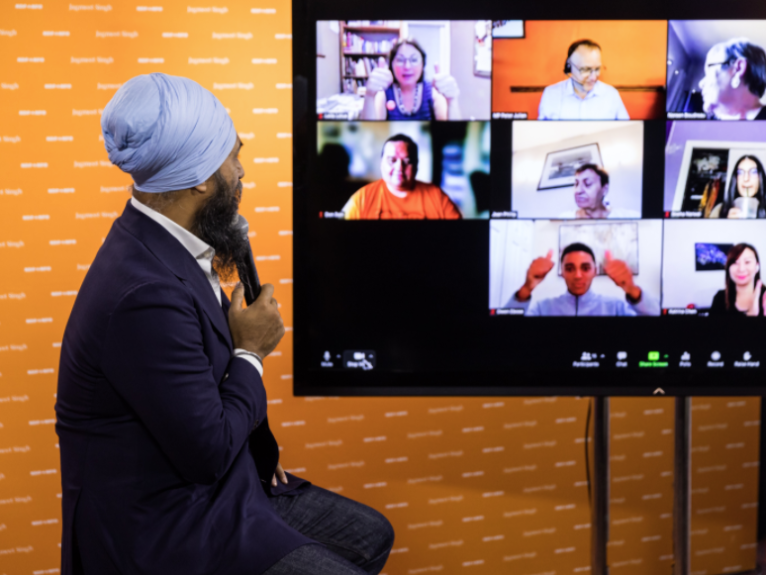 What’s a politician to do when they can’t shake a hand, kiss a baby, or—as the Prime Minister apparently likes to do—balance an acrobatic child on his palms? The answer is the same unfortunate virtual reality that thousands of at-home workers have faced in the last 18 months: Zoom calls. The leaders are still bouncing around the country, to be sure; the Conservatives recently unveiled their airplane, which will likely bypass most safe ridings in favour of flippable ones. Justin Trudeau is taking a slow route from Quebec into Ontario to start. NDP leader Jagmeet Singh started touring the Atlantic provinces in early August, but flew across the country to Burnaby, B.C. There, he accepted his riding nomination before the large Zoom screen you see in the image above, which his team quickly tweeted. It’s a sign of the times, no doubt signalling smaller events, fewer rallies and more virtual town halls, which O’Toole has already leaned into heavily from Ottawa. A hopeful voter might assume this leads to fewer parlour tricks and pep rallies, but the cynical voter knows it will only result in more staged photo ops. If Singh can’t hold a baby in person, we can at least see a photo of him holding one on the side of his campaign bus.