Sponsors of Syrian refugees are left in limbo

Canadian sponsors who were inspired to act by the Liberals are now waiting for families, with uncertain timelines 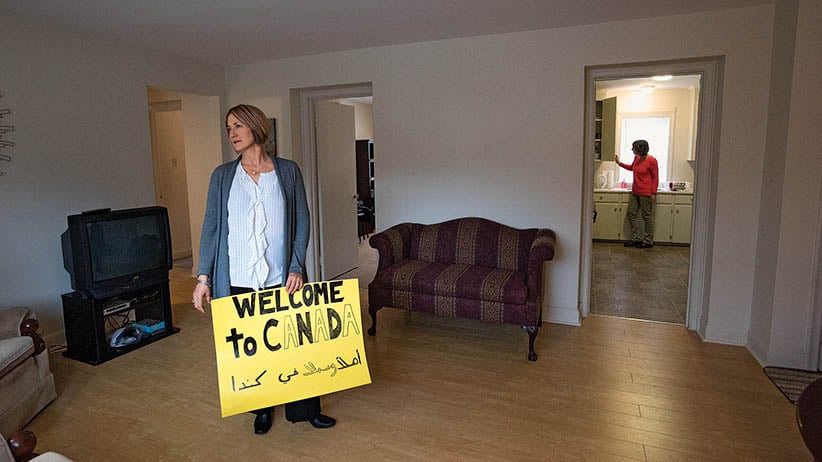 Rachael Tabor, left, and Deborah Woolway, waiting in the vacant apartment they have for the Syrian Refugee family they have sponsoured. (Photograph by Darren Calabrese)

By now, it’s a familiar Canadian story. Horrified by a humanitarian crisis on the other side of the world, a stranger feels compelled to sponsor a family of Syrian refugees. Over a cup of coffee, she asks some friends what they think of her idea. Within days, a group is formed and funds start pouring in. “I put out a few feelers, and bingo, we were away,” says Deborah Woolway, a property manager who lives in Dartmouth, N.S. “I just felt my neighbourhood would really respond to this.”

She was right. Her group, Crichton Park Friends of Refugees, collected more than $40,000 in three months, enough to sponsor a Syrian mother, father and their two daughters. The group filed its application in mid-January, just as planeloads of other Syrians were arriving by the day, all part of Prime Minister Justin Trudeau’s lightning-speed plan to welcome 25,000 by the end of February. When the family of four passed their medical exams and security checks, their flight to the Maritimes seemed imminent. “Like other groups across the country, we rented and furnished an apartment,” Woolway says. “It’s safe, it’s secure, it’s sunny—and it’s waiting for them.”

Today, that three-bedroom unit is still waiting for its new tenants—and the volunteers who worked so hard to raise the rent money are asking the same question as hundreds of other frustrated groups: What is taking so long? After orchestrating a historic effort to fast-track 25,000 Syrian refugees in a matter of weeks, why would the Liberals suddenly stop expediting applications, leaving thousands of other desperate Syrians—not to mention their dedicated sponsors—in limbo?

Related: The Rajab family is home, at last

“It’s a little bit of a slap in the face,” says Renee Field of Halifax, who is part of a private group that applied to sponsor a husband, wife and their three-year-old son, only to be told it could now take up to eight months to process their paperwork in Turkey. “We were all floored,” says the 46-year-old mother of four. “The government asked us to rally. We rallied, we raised money, and then they shut us down. It is not acceptable.”

The optics certainly aren’t flattering. The Trudeau government moved the bureaucratic equivalent of heaven and earth to fulfill an epic campaign promise, making sure to praise the generosity of private sponsors at every turn. Yet it now appears that as soon as it reached its goal, it sent the civil servants home and locked the doors. Everyone else still waiting in the queue? Get back in line, and brace yourselves for a much longer wait.

But underneath all the anger and uncertainty is the cold reality of Canada’s refugee resettlement program, where wait times are measured in years, not days, and resources are finite. The Syria project was an all-hands-on-deck aberration that cost hundreds of millions of dollars, from extra staff to chartered jets. It was never designed to be anything but temporary—continuing to expedite Syrian sponsorship files would come at the expense of other worthy refugees.

“You have to understand how extraordinary those efforts were: completely off the map,” says Guidy Mamann, a Toronto lawyer specializing in immigration and refugee cases. “If you were to tell me that this is the new standard, that’s terrific, that’s fantastic. But you are going to have to triple or quadruple the manpower of the Immigration department.” 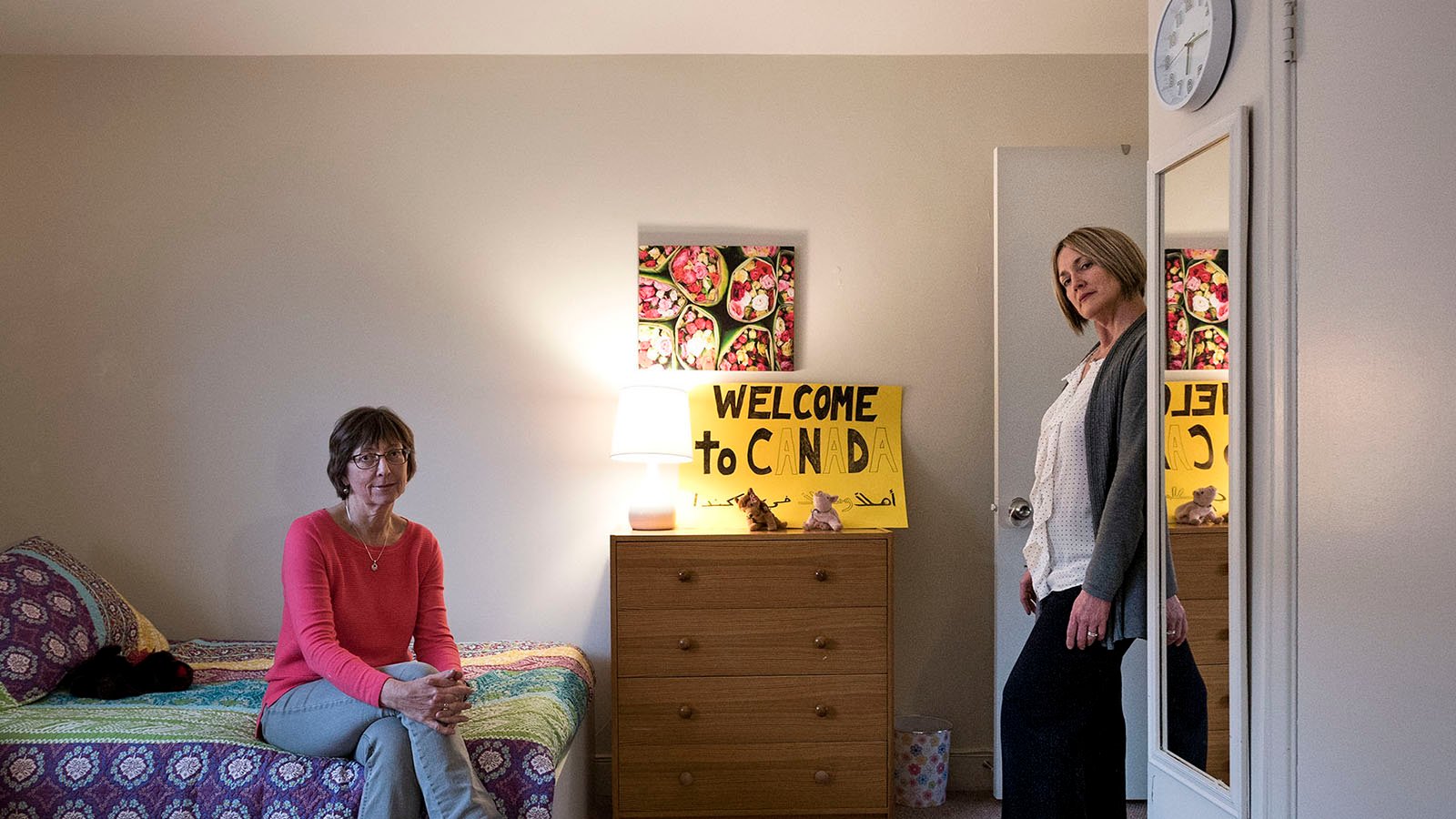 Rachael Tabor, left, and Deborah Woolway, waiting in the vacant apartment they have for the Syrian Refugee family they have sponsoured. (Photograph by Darren Calabrese)

That’s little comfort to the long list of groups that have spent months fundraising and preparing, only to be left with vacant apartments and unknown timelines. But how it reached this point—and what happens next—really does boil down to a basic math lesson.

As of March 28, the Liberals had welcomed 26,207 Syrian refugees. Approximately 15,000 were government-assisted: those deemed most vulnerable by the United Nations refugee agency, and whose first year of living expenses will be paid for by the feds. The rest were either 100 per cent privately sponsored, or part of the “blended” stream, in which the feds cover half the costs but it’s still up to private sponsors to oversee resettlement (everything from finding housing to opening bank accounts to explaining bus routes.)

Come November, the federal government typically releases its detailed immigration caps for the coming year, including how many private refugee applications it will accept from so-called “sponsorship agreement holders” (SAHs), the pre-approved church groups and community organizations that help people like Woolway and Field submit their paperwork. But because of the election, and the Syrian ramp-up that followed, Ottawa was a bit late with its 2016 estimates. In the meantime, though, the Liberals continued to encourage private sponsors to file Syrian applications at the start of the new year—all in the name of reaching that 25,000 mark.

Cue the confusion. SAHs were under the impression that because the government was anxious for cases, any Syrian application filed after Jan. 1 would not be counted against the soon-to-be-announced cap for 2016, but rather included among the special group of 25,000. But when the cap was finally unveiled last month—10,500 privately sponsored refugees from all regions of the world—Ottawa broke the bad news: the cap for 2016 would indeed include any Syrian applications filed after Jan. 1. SAHs were outraged, worried that many groups who had rallied to help would essentially be turned away because there weren’t enough spots to go around

The discouraging news didn’t stop there. After celebrating the arrival of the 25,000th Syrian refugee at the end of February, the government also informed SAHs that the massive Syrian processing regime would be scaled back to typical speed (nine months for cases in Lebanon and Turkey, eight months for Jordan). Translation: your refugee families may arrive by the end of 2016. Or they may not. By Easter weekend, the news was full of angry do-gooders who felt duped—and the government’s response only added to the ongoing confusion.

In a March 30 letter to SAHs, Immigration and Refugees Minister John McCallum agreed to reverse the Liberals’ stance, saying any Syrian application filed before March 31 would no longer be counted against the 2016 cap (allowing for an estimated 4,000 additional cases). But for groups who had yet to apply, that left just 24 hours to ﬁle their paperwork. At Lifeline Syria, a Toronto organization that matches refugees with willing sponsors, staff worked throughout the night to finalize nearly 150 submissions.

But resolving the cap issue did nothing to actually improve wait times. As McCallum repeated in his letter, “every effort will be made to finalize the processing of these Syrian refugees by the end of 2016 or early in 2017.” He continued: “At the same time as we are accepting many new applications, we must also decrease backlogs and increase processing efﬁciencies and capacities—all within a department that does not have infinite resources.” On Tuesday, McCallum said he would meet with sponsorship groups to discuss the problem “in more detail.”

Jim Estill of Guelph, Ont., the CEO of Danby appliance company, was quoted around the world after announcing in November that he would personally put up the money to sponsor 50 Syrian families. So far, only five have arrived, and he’s not sure why. “Government offices are completely swamped, I get that, and it was Herculean to get 25,000 people here,” he says. “But if they got 25,000 people here in three months, surely you can do that for others. We need to speed it up.” Although Estill is a patient man, he says he’s heard of some groups that have started reimbursing donations, choosing to abandon the sponsorship process rather than wait it out.

“I don’t really understand why the government has decided to slow things down and reallocate resources when there has been such a groundswell of interest and hard, firm commitments on the part of sponsorship groups,” says Sharry Aiken, an immigration law expert at Queen’s University. However, the professor also understands the tug-of-war for resources that goes on inside the department, and that Syrians are not the only refugees who deserve Canada’s help. “We need to know that those other programs have not shut down, that they’re continuing—as they should,” she says.

For Mamann, the latest twist to the Syrian refugee story really comes down to expectations versus reality. Many of those who mobilized in recent months have never sponsored a refugee before, he says, and they are oblivious to how complex and lengthy the process can be. “Am I surprised that the torch is not blazing as high as it was before?” he asks. “I am not surprised at all. Do you have any idea what it typically takes to bring in a privately sponsored person?” From Kenya, the average wait time is 75 months. From Pakistan, 71 months. A sponsored refugee living in Cambodia or Rwanda would be lucky to reach Canada in four years.

“Processing in the Middle East is still faster than the global standard,” says Brian Dyck, chair of the Canadian Sponsorship Agreement Holders Association. “That is something a lot of people don’t understand.” As much as Dyck sympathizes with the groups still waiting for their refugees to show up, he is also urging patience, pointing out that a nine-month lull is still better than a five-year lull. “The government was functioning in emergency mode to process those cases,” he says. “And you can only do that for so long.”

Deborah Woolway is anything but blind to the dynamics at play. But she also believes it’s only fair that applications already in the system continue to be expedited at the rate of previous cases. It is the least the government can do to acknowledge the remarkable efforts of so many everyday Canadians. “We have raised the money, we have put the energy into this, and it’s up to the government to figure it out,” she says. “Surely to God the government doesn’t want the cynical view to be held that: ‘OK, they got to 25,000 refugees, they got the photo op, and now it’s light’s out.’ That is crazy.”

UPDATE, 7 April 2016: On Tuesday, McCallum said he would meet with sponsorship groups on Thursday to discuss the problem “in more detail.” After that meeting, the minister told the Toronto Star he has agreed to redeploy staff to the Middle East to fast-track another 10,000 Syrian files—but that sponsors back in Canada can expect to wait longer than three months for those refugees to arrive.

More details on the plan will be announced next week, McCallum said. “I’m disappointed that we can’t do it faster, but it’s the reality when you are operating at full capacity,” he told the Star. “You can’t just increase by a large number one group without any negative implication for other groups.”