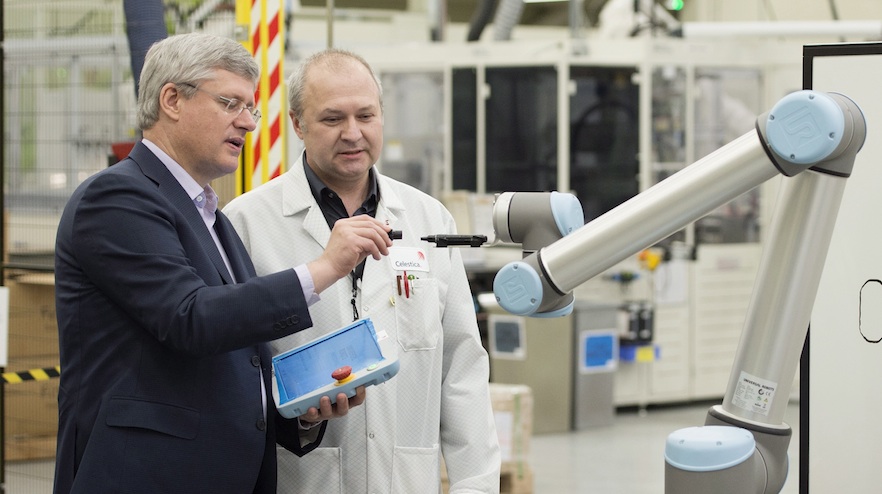 I’ll get to the details, but start here: Stephen Harper’s lunch-hour event in Markham outside Toronto today should put a chill through the spine of any opposition politician watching.

In a brief announcement in a high-tech factory setting, the smiling and relaxed Conservative leader — freshly home from a trip to Senegal, showing no signs of fatigue, tricked up with a lapel microphone that allowed him to roam far from his podium while he read from notes on teleprompters — delivered news of high-technology bounty that would, he assured the handpicked and photogenic crowd arrayed behind him for the cameras, usher in a new era of prosperity and employment.

And then the president of the University of Toronto, Meric Gertler, went to the podium to offer Harper the thanks of a grateful university community. Within minutes, the presidents of other large universities were chiming in on Twitter with their own thanks. “A transformation for Canada,” Michelle Rempel, the minister for Western economic diversification, called it, also on the Twitter.

It would be  difficult for another party leader to have a better day than Harper on the trail, if today were a campaign day. Which means that, in a sense, of course today was a campaign day. Harper’s performance today, coming on the heels of similar announcements on taxes, infrastructure and newborn health, could help explain why the polls are starting to look like this.

Now the details. Harper was announcing the implementation of a 2014 budget commitment, the creation of a Canada First Research Excellent Fund. It’s $1.5 billion over 10 years: it’ll take a few years to ramp up to $200 million in spending per year, country-wide. While the fun was proposed by, and is being cheered by, the big research universities of the so-called U15, the money will be available to all “post-secondary institutions” — roughly, universities plus polytechnic colleges — regardless of size. Here are the eligibility criteria. The big universities expect they’ll be able to get the lion’s share of CFREF funding. But they’ll need to fight for it.

A few observations. First, on scale. In 2013 I wrote about one of Harper’s biggest insights in government: that Canadians pay no attention to decimal places, so that $1 million spent on an issue is roughly as impressive to voters as $1 billion is. Two hundred million a year is welcome news and was definitely worth Meric Gertler’s time; but to hold that it will transform Canadian research, you need to ignore that $200 million is the amount the Commonwealth of Virginia spent on research over two recent years; or the amount Mort Zuckerman donated to Columbia University in 2012, or the amount philanthropist Geoff Cumming and the Alberta government recently gave to the University of Calgary. Or a little less than the Rogers family and the UofT recently set aside to set up a new heart disease research institute.

It’s real money, it will pay for serious research, and it is a real if partial rebuttal to the assumption, widespread among the Conservatives’ critics, that they are Neanderthals who would prefer that Canada be returned to the level of technological sophistication that it enjoyed in the Diefenbaker years. But on the scale of higher-education research in North America, it’s a top-up. And it comes in the context of a generalized flatlining of federal funding for research over the past eight years. Since research is funded, not only by central governments but by provinces, philanthropy and business, it’s worth looking at this chart from the same report, which shows that Canada is seriously underperforming against competitor countries in recent years.

Which leads to the other observation about the CFREF and everything else the Harper government is doing in science these days: it is carefully targeted, in ways that look clever and modern but are certainly self-defeating. This paragraph in today’s announcement:

Proposals will be required to align with the government of Canada’s updated ST&I priority research areas, released as part of its renewed ST&I Strategy: environment and agriculture; health and life sciences; natural resources and energy; information and communications technologies; and advanced manufacturing.

… along with further language in the eligibility criteria that state research projects will only be accepted if researchers can recruit private sector co-funders. This sort of stuff is everywhere: one of the rare and very rich Canada Excellence Research Chairs is reserved for a researcher in energy science, and lo and behold, the University of Calgary’s new CERC will devote his talents to finding clever ways to extract more oil from oil sands. That’s no crime. But the applications of scientific research are impossible to predict, and attempts to “aim” research outcomes almost inevitably simply restrict the kinds of research that end up getting done.

Thomas Edison would have had little luck inventing the light bulb if he had needed co-funding from candlemakers. Tony Pawson, one of Canada’s greatest researchers, found a massively lucrative class of molecules called protein kinase inhibitors — like, very large numbers of billions of dollars in market value — after spending decades asking questions about a turkey virus.

Now comes the news — not announced in spiffy Markham photo ops, but dug up by the CBC — that the Canada Institutes of Health Research’s constituent sub-groups will have their budgets cut in half, with the rest going into a common pool accessible only through co-funding deals. This sort of meddling is bad for science and not helpful for private sector research. The government’s own blue-chip advisory council keeps telling it the same thing. But the government can’t help itself: private sector research in this country is broken, and the Conservatives’ best answer is to break university research. I’m pretty sure some university presidents in this country would agree with me, if they weren’t locked into this weird dynamic where they have to thank the feds for every dollar, accompanied by strings of asterisks and footnotes, they can get.