The Tory leader is at ease. And then reporters ask more questions. 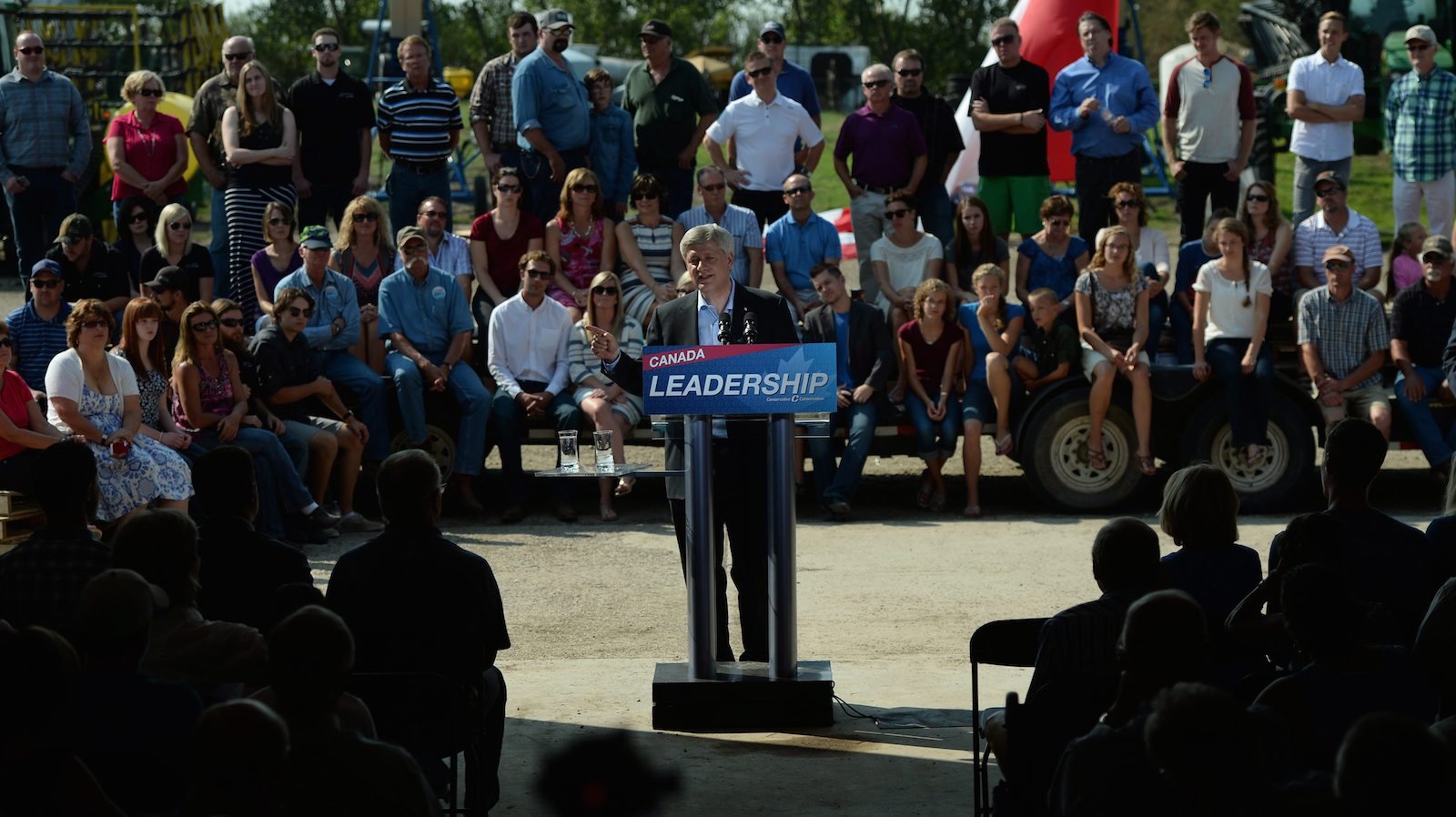 Prime Minister Stephen Harper delivers a speech to supporters during a campaign stop at a farm in Pense, Sask., on Aug. 13 (Sean Kilpatrick/The Canadian Press)

A moment of levity greeted Stephen Harper as he welcomed a crowd of supporters to the Wood family’s farm southwest of Regina on Aug. 13. And it was all Laureen Harper’s doing. Zoe, a friendly yellow Lab, was supposed to be safely locked away in the Wood’s home at the request of the Mounties. But Ms. Harper, when she saw the poor dog behind closed doors, would have none of it. Ever the lover of pets, she insisted on Zoe’s freedom. Seconds later, as the Conservative leader approached his podium, Zoe trundled over to say hello. Harper made a joke of it, the crowd giggled, and the stump speech went ahead.

You pretty much have to be there to witness those lighter moments. They certainly don’t define Harper’s campaign. A friendly dog a day wouldn’t save the Conservative leader from the worst part of every stop on the hustings. Only a few minutes after Zoe’s cameo, just past 10 a.m. local time, the Prime Minister girded himself for his daily flogging. The sun was hot, and he was sweating. The beads were even visible on the live stream. He half-wiped his brow now and again, but didn’t dare make a sudden, dramatic movement, lest a camera catch him in an unbecoming pose. He looked distinctly uncomfortable. “It must have been 32 or 33 degrees,” says Jim Wood, the owner of the land lent to Harper that morning. “Unusual for so early in the day.”

When Harper finished his speech—a self-laudatory look at his government’s record—he faced his daily tormentors. Reporters. They pestered the PM with questions about his knowledge of Nigel Wright’s payment of Mike Duffy’s questionable expenses. Harper, as always, replied that he knew nothing of the scheme until a reporter broke the story back in May 2013. He blinked away sweat, squinted in the sun, and endured the mini-inquisition. If only Zoe’s comic-relief act could have broken the tension. No such luck.

The Conservative tour has undergone vastly more scrutiny than any of its rivals. NDP Leader Thomas Mulcair took no questions at his campaign launch, but he hasn’t made the mistake of seeming that aloof again. Liberal Leader Justin Trudeau has so much time for journalists that someone even asked him to name his favourite Avenger (Hulk, it turns out). Harper must, by times, envy his Liberal opponent’s luck. Were Harper to offer more questions than the standard five a day—four to national reporters, one to a local outlet—it probably wouldn’t help him any. He’d be stuck talking more about Ol’ Duff.

Earlier this week, Harper’s bus rolled up in front of Toronto’s Amsterdam brewery for what seemed like a spur-of-the-moment event. The Tories had not sent out a media advisory about it, though later claimed that was due to “a glitch” on the party’s servers that briefly interrupted their press operations—and largely kept away the horde of reporters who weren’t paying to ride the campaign bus.

That whistle stop at the brewery did, however, come rather abruptly. Where the Wood family had four days’ notice to clean up the farm, and a Fredericton inn just before the Toronto sojourn had a lead time of about a week, the Amsterdam team didn’t know what to expect when they got to work on Aug. 18. “No one knew for sure” that the PM was coming that morning, said Amsterdam owner Jeff Carefoote, until big crowds started to gather. (The space was already booked by John Carmichael, the local Tory incumbent in Don Valley West and an occasional patron of the brewery. Carmichael simply ceded the room to his boss.)

Pesky journalists got to ask not a single question of the man whose childhood home still stands about a five-minute drive from where he stumped. What stood out to Carefoote about Harper’s drop-in was his family’s noticeable presence on the campaign. The brewer talked shop for a few minutes with the Prime Minister, who asked which beer was most popular (the Natural Blonde). They chatted about Harper’s early years in the neighbourhood, and even talked a little policy. All the while, Laureen, as well as son, Ben, and daughter, Rachel, stood nearby. “It was very cordial,” says Carefoote. “Very down-to-earth.”

No reporters stuck a mic into the middle of that huddle. But the Harpers aren’t going unnoticed; they’re no mere bystanders in this campaign. Wood, a party supporter who’s campaigned in the past for long-time MP Tom Lukiwski, says the kids “didn’t seem like they were hanging back. They were right in there, shaking hands and saying hello to us.” CTV’s Laurie Graham, one of the reporters who won’t relent on the Wright-Duffy file, blogged about Ben’s turn as a trivia master on a flight over the Northwest Territories. Ben, she writes, “turned a grumpy plane into enthusiastic contestants.”

The day after a Tory supporter unleashed that by-now infamous screed against reporters at an airport hotel, Harper was in London, Ont., taking on-stage questions from a small-business lobby group. The Harpers entered the room to polite applause from the crowd before they settled down in front-row seats. Another brief family moment. Dan Kelly, the head of the Canadian Federation of Independent Business, gently guided Harper through an easy interview. Harper sounded strong, and reporters waited their turn. Then they got down to brass tacks. As usual.

The Prime Minister is said to be relaxed with his family at his side. Whatever their effect on him, Harper appears at ease during morning policy announcements and evening rallies—in other words, whenever he’s not talking about disgraced senators and former chiefs of staff. Wood, who’s met Harper on a couple of occasions, described the PM as genuine in quieter moments. They talked about the season’s crop (not bad, despite a dry summer). “To me, he’s the kind of guy, if he lived next door, you’d have a cold beer with him on a hot Saturday night,” says Wood.

“I’ve had other politicians out here before, and you can tell they didn’t really give a damn,” says Wood. “But it doesn’t sound manufactured from Harper.”

That praise comes from a friend of the party, of course. Confronting opposition isn’t really the point of his leader’s tour. Wherever he is, whether a safe riding or enemy territory, friends surround him. It’s a family affair. It’s party faithful celebrating conservatism. It’s on a farm one day, in a brewery the next, and on and on. It’s Zoe the dog, wagging her tail. It only feels like work when the party cedes the floor to the unknown.