Stephen Harper's own words: 'I was never in the job to be liked'

At closed-door gatherings, the former PM blasts the Trudeau government's 'disgraceful and unforgivable' posture toward western energy interests, but endorses trade action against the U.S. 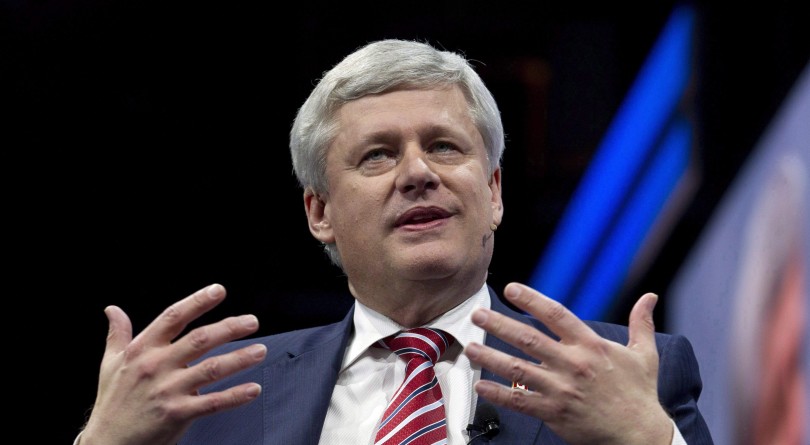 In mid-June, former prime minister Stephen Harper gave speeches to small chambers of commerce in Lloydminster, Sask., and Leduc, Alta. In keeping with his desire not to comment on what his successors are doing, his speech largely stuck to global political trends, trade and business opportunities. But the audiences wanted to know about his views on the Liberals, pipelines and other domestic matters. In moderated question-and-answer sessions, Harper entertained his conservative-friendly crowds’ curiosity.

Though both evening speeches were events open to the ticket-buying public, media were barred at the speaker’s request. Maclean’s purchased tickets and listened to what Canada’s sixth-longest-serving leader had to say.

“My government turned down some major energy and other developmental projects based on the recommendations of the environmental assessment review. But you know Northern Gateway was approved, Kinder Morgan was approved. Energy East was going through the process. I don’t want to say it would be approved but I don’t see any reason why it would not have been approved with conditions, as was the case with the others. And then what happened, was this government came in and they rescinded without any hearing whatsoever the Northern Gateway approval, they changed the rules so the Energy East pipeline could never get through the process no matter what, and now they have stepped back and let people believe outside this country that if there are protests around the Kinder Morgan pipeline that it can’t get built. And now they’ve stepped in to buy it, no intention of building it just to convince us by the way they’re not blocking that project as well…

“When we face trade actions we think are unfair, I don’t think there’s any alternative but for our government to respond aggressively.  I don’t think you have a choice.”

Relations with the U.S.

“We really have to demonstrate to the United States that we are not just an important neighbour and trading partner. That we really are a partner of theirs. And we have to look for opportunities to be a partner, to show our value to the United States. And I understand there are times when the government won’t or can’t do that, but I think there are lots of opportunities for us to do it.

“I felt that for instance on the Keystone pipeline, on the recognition of Jerusalem as the capital of Israel, on the withdrawal from the Iranian nuclear deal, on the heightened fight against ISIS and terrorists in the Middle East—I thought these were all perfect opportunities for us to demonstrate that we’re a real partner with the United States. It’s great to be a buddy and it’s great to stand up. But you know, you don’t get into these kinds of conflicts if you’re really showing you’re valuable.”

RELATED: Trump and Trudeau turn from friends to foes amid trade dispute

Trade with other countries

“We’ve signed all these trade deals, great deals, real benefits for Canada. But we are and always will be dependent on having secure access to the American market. There’s no way around that. I can tell you, just frankly, one of the reasons I was able to get a trade deal with the European Union was to convince the European Union and others—in fact, this is behind most trade deals I got—that getting a trade deal with Canada would assist those countries in getting trade access to the United States.”

“When I was prime minister, I tried to advance interests of every industry, in every region of this country, and I think it is frankly disgraceful and unforgivable that we have a federal government that thinks it can be against key industries in the Western Canadian economy.”

“I’ve said for a long time I really don’t want to comment on the new government. I really don’t want to comment on my successor. I will tell you one thing in fairness. I know a lot of former world leaders, and I don’t know a single world leader who thinks his successor is doing a good job. That tends to be the nature of people like us. We can’t really imagine anyone else being quite as good, and the truth of the matter is sometimes, often, they hate leaders of their own party far more than they hate subsequent leaders of the other party. Although I think our new [Conservative] leader is doing a good job… But all I will say about my successor is this: I always did think there were things that Canadians would miss about me and my government. But I never thought it would get to the point where they miss my sense of fashion.”

RELATED: Harper vs. Trudeau at the UN: Compare and contrast

“I was in New York with some investors at the height of this conflict about a month ago. And I cannot tell you the damage this is doing to Canada. Canada—it’s not about energy and about pipelines. Our strongest suit as a country is that there is no business environment in the world that is fairer, predictable, enforced with virtually no corruption, rule of law-based. And all of a sudden people are saying, boy, in Canada could one province block my business from another province? What kind of country is this? I thought this was a stable, rule of law environment? And we can’t lose that, we cannot lose that brand. So I urge all governments to conduct themselves—you know, this is really no-brainer stuff—conduct themselves intelligently.”

The Paris climate accord

“I argued with members of our party last May the Paris agreement is the most meaningless international agreement ever signed. If you’re a country, you decide the target and you decide whether you’ll meet it and you explain whether you’re meeting it or not. I always wish school was like that when I went. We’d all have As.”

“I’ve never met Mr. Trump. We do have a lot of mutual friends and acquaintances. I know many of the people in his cabinet and who work for him. I will just say the stories are legion. He’s definitely an interesting and complex guy. But, look, I don’t think and I’m not going to tell you for a moment based on what I know Trump would be an easy person to do business with. But I can also tell you I think he’s actually a reasonably easy person to assess.”

Andrew Scheer, and advice for him

“When he asks for my advice, I give my advice in private. I think he’s doing a good job. I always say with Andrew he’s a sensible, energetic, family, conservative guy. Nothing strange or weird is going to happen with Andrew. His feet are on the ground. And he understands what’s right and wrong and what works and doesn’t work.

If you get the economy right, everything else tends to be manageable. If you get it wrong, nothing you do works. I don’t think we are getting the economy right; we’re very fortunate frankly that there is this massive boom going on in the United States that is pulling us along, but I don’t think we’re really getting the economy right. And I think the evidence on that will become—it’s certainly clear in this part of the country already. It’s going to become clear in other parts of the country and I think obviously that’s our opportunity.”

“Rob was a great guy, but Rob was genuinely a wild guy. Doug is not a wild guy. He is a businessman. He’s got very sensible conservative instincts.”

I have little doubt in my mind that he will be the next premier. I’ll give caution on one thing. He cannot be beaten by the NDP. The NDP is finished. They will not beat Jason Kenney. But the NDP’s not the one who won the last election here. The media won the last election. The media elected the NDP. And the media is going to go out of their way to bring Jason and the party down. The media will go out of their way once they know the NDP can’t win of trying to invent some other option, some group of liberals or whatever, the Alberta Party, these are now the new and exciting guys and once again we’ll tell you it’s all safe and it’s [a] mainstream ticket. That is the game they’re going to play.”

“I made a number of attempts to get Senate reform, elected senators and some other reforms in the Senate. I was not the least bit successful. And I came away absolutely convinced that well theoretically I’d like to see that and while there are many good people who serve in the Senate of Canada, I don’t believe there is any solution to the current Senate other than its abolition.”