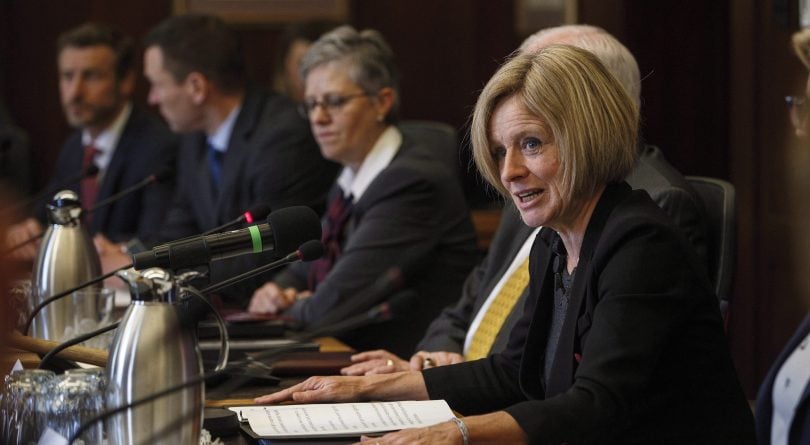 Alberta Premier Rachel Notley makes remarks before the first meeting of the Market Access Task Force, convened to respond to B.C. in the fight over the Trans Mountain oil pipeline, in Edmonton Alta, on Wednesday February 14, 2018. THE CANADIAN PRESS/Jason Franson

On the day Donald Trump punished most nations of the world (including his own) with steel and aluminum tariffs, Alberta Premier Rachel Notley made a policy declaration that sounds more Trumpian than any Canadian observer might have imagined possible, especially after she banned B.C. wine over a pipeline tiff and then relented weeks later. Had she extended the act a few more beats, it might’ve sounded like this:

British Columbia is treating us very bad, and everyone is laughing at us. And we are tired of being laughed at. And I think if they don’t want our beautiful, beautiful oil, maybe we should just stop letting them have it altogether. We will put legislation on my desk soon to do just that, maybe next week. They won’t like that, believe me, but British Columbians and so many other people cannot keep doing the things they’re doing. It isn’t just Alberta first, really it’s Canada first. Without pipelines, we don’t have a country.

Her rhetorical style is decidedly not up to Trump’s zany standard, but on this day it matched the U.S. president’s manner of threat-making that is as ominous as it is vague, and subject to change according to the political whims, or winds.

RELATED: Rachel Notley takes on pipeline critics—even if they’re from her party

In an echo of a gambit Opposition Leader Jason Kenney has suggested, and which Notley in response mocked as over-the-top and defeatist, the premier in the Throne Speech threatened that, if John Horgan’s B.C. government throws up unreasonable and obstructionist roadblocks to the federally approved Trans Mountain pipeline expansion, Alberta is willing to—somehow—throttle back oil shipments through the existing pipeline. Or clamp down on permits that allow B.C.’s natural gas to flow through Alberta en route to the United States. Except, she didn’t actually say that’s what she would do. At a news conference where she explained her stance, Notley’s rhetoric had all the nebulousness of Trump’s, and some finger-jabbing, but a lot of light dancing as well.

“What we are making sure is the ability to engage all those tools strategically,” she said. “So one thing might ultimately turn into the restriction of supply down the road, and there are various ways in which that can be used with various different outcomes. So that’s something you may see legislation to allow us to do this session.” (Yes, this was what passed for Notley getting tough, with the occasional “we will not hesitate” and “let me be clear” thrown in for slightly more dramatic effect.)

In the Throne Speech, this was merely hinted as Alberta being ready to follow the precedent of the “bold action” of that former premier Peter Lougheed took in response to Pierre Trudeau government’s oil-taxing National Energy Program in 1980. While the rose-tinted memory of 38 years ago holds that Lougheed turned off the taps to those eastern bastards, what the then-premier actually did was owed far more to command-and-control economics than most think Notley would dare try: he vowed to reduce the Alberta oil industry’s production to 85 per cent capacity.

That doesn’t appear to be what Notley is threatening to do, though a shipment cut would similarly hurt the province’s own energy producers … but it’s not totally clear. Not much is, to be honest. She suggested shipments of oil from Alberta and B.C. natural gas traversing Alberta could be on the chopping block, and had no firm answer about what Horgan’s NDP government would have to do to provoke such a last-resort retaliation, a nasty flash of trade warring that could send Lower Mainland gasoline prices skyward. The B.C. New Democrats’ previous plan to restrict any additional bitumen flow by pipe or by rail while a new spill-safety study was ongoing—the plan that provoked Notley to temporarily ban B.C. wine—didn’t seem to have been enough to provoke this escalation, or maybe it would? The legislation to create the “tools” and “maximum flexibility” remains in the works, the Alberta premier admitted—one pictures the bureaucrats and lawyers as they are in the White House, scrambling to figure out how, exactly, to put their leader’s intentions into effect.

But the idea doesn’t come out of thin air, or some random tweet this premier noticed. The threat has been mouthed by Notley rival Jason Kenney since the middle of last year—he repeated it this week during a visit to Vancouver—and she at times shrugged it off as Trump-like talk of building a wall (funny, that). But earlier this year when she played control-and-command with Okanagan Valley rosé, Notley got an intoxicating taste of the popularity that came with assertive talk and action, and it appears she doesn’t want Kenney to reclaim ground as the Tough One. When Lougheed throttled oil production in 1980, polls favoured his move five-to-one. Polls never seem to favour Notley, so it’s obvious she craves more of a bump from a pro-pipeline stance. But it’s one thing to make grim threats as an opposition leader; it’s another to do so as premier, which may explain the jumbled and evasive way Notley wound up declaring that she has a giant, red button on her desk and she’s not afraid to use it.

Meanwhile, on the other side of the Rockies, the Horgan NDP appeared mightily befuddled when Notley erupted with fury and wine boycotts in response to what the B.C.ers professed was a reasonable concern for their coastlines. As we’re seeing in another trade war, one involving with hard metals, the provoked party isn’t always bound to back down, especially when political fortunes are at play. Horgan won’t like what Notley is doing. And she won’t like his response when it turns out that he isn’t keen to crater, particularly when blasted with a mere threat, or a vapourous cloud thereof.