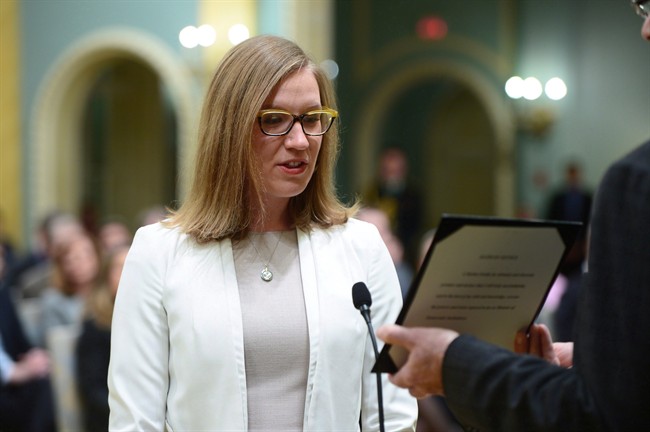 Karina Gould is sworn in as Minister of Democratic Institutions during a cabinet shuffle at Rideau Hall in Ottawa on Tuesday, Jan 10, 2017. THE CANADIAN PRESS/Sean Kilpatrick

OTTAWA – Two-thirds of Canadians are happy with how their current voting system works, says a report detailing the findings of the Trudeau government’s online electoral reform survey.

“Though satisfaction does not necessarily preclude a desire for reforming the electoral system, a majority of Canadians (67 per cent) report being somewhat or very satisfied with the way democracy works in Canada,” said the report’s executive summary.

“Canadians are receptive to options to express their preferences with greater specificity, but not if the result is a ballot that is more difficult to interpret.”

And while just over half of respondents – 53 per cent – said they were opposed to mandatory voting, a majority also supported the idea of being able to cast a ballot online, just so long as the system is demonstrably secure, the report stated.

Prime Minister Justin Trudeau promised to make the 2015 election the last held under the current first-past-the-post electoral system, although he has since shown signs of backing away from that commitment.

Shortly after the survey was launched, opposition critics howled in protest, noting that none of its 30 questions made mention of a proportional voting system – widely seen as one of the most viable alternatives.

Conservative MP and democratic institutions critic Scott Reid predicted the Liberals would use the results to gerrymander the debate over electoral reform to the benefit of their own electoral gain. The Tories want Canadians to have the chance to pass judgment on any new electoral system in a national referendum.

NDP democratic reform critic Nathan Cullen, whose party has voiced a preference for a proportional system, called the survey a “pop-psych” poll that didn’t ask Canadians to choose a specific electoral system.

“When you insult Canadians with vague questions you get unclear answers, which may have cynically been what they wanted all along,” Cullen said.

Proportional representation, proponents say, would produce a House of Commons in which the popular vote is more accurately represented, with some MPs representing a geographical region instead of an individual riding.

Electoral reform proponents argue that the current voting system, which elects one MP in each of 338 ridings across the country, is unfair because MPs can be elected with less than half the votes cast when more than two candidates are running.

The government encouraged Canadians to take part in the MyDemocracy.ca survey, an online and phone survey about changing the electoral system that took place between early December and Jan. 15.

After the government mailed postcards to 15 million Canadians asking them to take part in the survey, approximately 383,074 people responded, 96 per cent of whom live in Canada, said the report.

The results, the report’s authors said, were “weighted to the census” in order to make the findings more representative of the findings and more reflective of Canadians’ views “on a number of key considerations within the electoral reform discourse.”

The report also found that an overwhelming 90 per cent of respondents supported placing limits on the length of federal election campaigns.

The 2015 campaign, at 11 weeks, was the longest in Canadian history.

As well, 66 per cent of Canadians are opposed to lowering the voting age from 18, the report said.