Those fighting Bashar al-Assad’s regime have never been fully united, but divisions are growing increasingly deadly

Kamal Hamami, a commander in the Western-backed Free Syrian Army (FSA), was murdered this July in the Syrian port city of Latakia. He had reportedly gone there to meet with members of a nominally allied rebel group, the Islamic State of Iraq and the Levant (ISIS), to discuss plans against their shared enemy, the regime of Syrian President Bashar al-Assad.

One of the ISIS leaders reportedly condemned the FSA as “infidels,” then killed Hamami and his brother. A third man travelling with the pair was allowed to live so he could report their deaths. An FSA spokesman told news outlets someone from ISIS called him to claim responsibility for the killing and to promise they would soon kill all members of the FSA’s Supreme Military Council.

Hamami’s death attracted attention because of his stature, but it was far from isolated. Those who have been fighting Assad’s regime for nearly three years have never been fully united. But divisions are deepening and becoming violent, as the strength and influence of extreme Islamists among them increases, and as Syrians who reject the Islamists’ world view push back.

The exact makeup of the opposition is difficult to discern, and is disputed. A report published last month by IHS Jane’s Terrorism and Insurgency Centre estimated that nearly half of the 100,000 or so fighting against Assad are hardline Islamists, including some 10,000 radical jihadists and foreign fighters belonging to groups linked to al-Qaeda. Another 30,000 or so are also extreme Islamists but have a purely national agenda, according to the report, which alleges that the remaining fighters are comparatively moderate Islamists, plus a small minority of secular rebels. 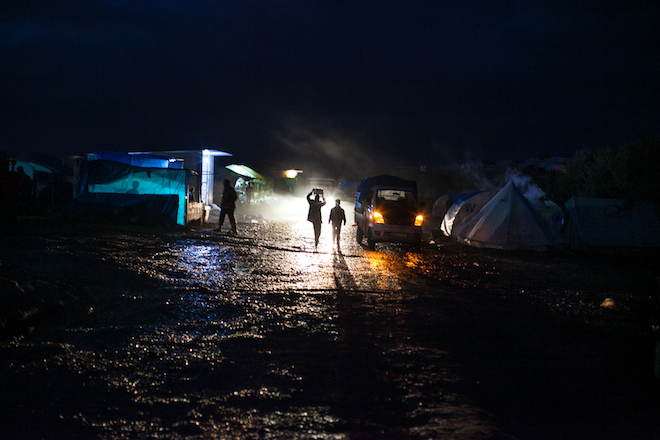 Displaced Syrians from Atmah's refugee camp walk in the main street at night on Feb. 8, 2013. Situated along the Turkish border, Atmah's refugee camp is considered the biggest refugee camp inside Syria's territory with an estimated 14,000 refugees. Most of them are from from Idlib and Hama province, but also some residents come from Homs province. (Daniel Leal-Olivas/i-Images/Polaris).

At times, the various groups have co-operated. But they have different agendas and ideas about what Syria’s future should look like. In territories they control, extreme Islamists have enforced harsh versions of sharia, or Islamic law, indoctrinated school children and staged public beheadings. The radical Islamists are among the more militarily organized rebel groups, with members who have previously fought in Iraq and elsewhere. They are also wealthier. They attract funding from sympathetic donors in the Gulf and, within Syria, have lately benefited from control of some of the country’s roads and smuggling routes.

Many of the more moderate brigades of the Free Syrian Army are also Islamic in nature but have proclaimed a commitment to pluralism and democracy. They get a lot of support from the West but not much in the way of bombs and guns. “Every time a different diplomat comes through, there are promises of arms, but very little seems to come their way,” says Bessma Momani, a fellow at the Centre for International Governance and Innovation in Waterloo, Ont. “That’s created terrible morale in the Free Syrian Army.”

It has also, arguably, led to a thinning of its ranks. Last month, at least 11 rebel groups announced that they rejected the Western-backed umbrella group, the National Coalition for Syrian Revolutionary and Opposition Forces, which is recognized by more than 100 countries as the representative of the Syrian opposition, and urged Syrians to unite under “a clear Islamic framework based on sharia.” The bloc included moderate Islamist groups, including the Tawheed Brigade, but also the extremist Nusra Front. The Islamic State in Iraq and the Levant, whose members include many foreigners, did not join the bloc.

Syria does have indigenous Islamist roots, especially in the rural northwest. It is also a pluralistic and multi-ethnic society with a tradition of tolerance and moderation. Despite Assad’s propaganda, it was far from inevitable that extremists would thrive as a result of the revolution. But for more than two years, there has been an absence of stable governance, and an ongoing humanitarian disaster unfolding in much of the country. At least 110,000 people have died. Two million Syrians have fled the country and now live as refugees abroad. Another five million—about a quarter of the population—are internally displaced within the country.

“It was relatively easy for the more extremist jihadist groups to take advantage of that opening, and it seems they already had networks in Iraq,” says Michael Young, opinion editor at Beirut’s Daily Star newspaper.

Young believes the West should have intervened much earlier in the Syrian uprising, when Assad was on the defensive and the influence of jihadists among the opposition was weaker.

“From the beginning, the United States did nothing. They stood by while outrageous crimes against humanity were taking place,” he says.

Extreme Islamists have tried to win local support by providing bread and order, but their cruelty has also provoked defiance (repeating a mistake made by al-Qaeda groups in Iraq).

This summer, in the northern town of Dana, Islamists shot into a crowd of residents protesting ISIS’s presence in their town, according to the Britain-based Syrian Observatory for Human Rights. After a resulting gunfight, the severed heads of two local rebels from a group linked to the FSA were found near a trash bin in a town square. The al-Qaeda affiliate now controls the town. It has also attacked FSA fighters in Raqqa, another northern city. And it has pledged “war” against fighters from two rebel groups whose members tried to evict ISIS from a school in al-Bab where it had set up its headquarters, according to Al Jazeera.

Elsewhere, efforts by al-Qaeda-linked groups to broaden their reach have been rolled back. Kurdish nationalists who rebelled against Assad and carved out territory in the northeast of the country now defend their gains against al-Qaeda militants, who, presumably, resent that the Kurdish fighters include many women.

When two explosives-laden jihadists from al-Qaeda showed up at a mosque in the mixed Christian-Sunni rebel-held town of Yabroud, 80 km north of Damascus, and demanded it join an Islamic caliphate, residents ignored the implied threat of the suicide belts and drove them out. “We told them we don’t need them. We know what Islam is,” one man told the Telegraph newspaper.

These sorts of clashes reflect both the growing assertiveness of extreme Islamists among the Syrian opposition, and a consequential backlash among Syrians determined to resist them.

“It’s like a three-sided game of chess,” says Young. “Everyone has to protect himself from what they see as the enemy, which is Assad’s regime, but at the same time not lose ground to each other.”

The presence of radical Islamists within the Syrian opposition is one of the reasons Western nations have been hesitant to arm it, or more actively intervene on its behalf. This strategy is prudent, says François Heisbourg, a special adviser at the Fondation pour la Recherche Stratégique in Paris.

“We are not very well-placed to decide who is who in the volatile situation. And getting involved in the disorder is a very high-risk and probably low-payoff policy,” he says. “I think a wise outside power is a power which may help prevent Bashar al-Assad from doing things. Depriving him of his chemical weapons—that, I think, is quite useful, rather than fuelling this many-sided civil war.”

But whatever the outcome of the Syrian civil war—and the wars within it—its repercussions will affect the West. A victory for Assad is a victory for a regime that sponsors the Lebanese militant group Hezbollah, and for Syria’s major ally and patron, Iran. On the other hand, a rebel victory, or stalemate that devolves into further anarchy and leaves a large chunk of territory in the hands of al-Qaeda-type Islamists, is also a potential threat to Western nations and their allies in the region.

For Andrew Tabler, a senior fellow at the Washington Institute, recent fighting within the opposition at least “makes it a little easier to understand where the lines are drawn between the extremists and more moderate groups.”

That should also make it easier for Western nations, particularly the United States, to direct aid and weapons to groups that, even if they don’t share all our values, are unlikely to threaten us in the future.

“Given that we have long-term goals in Syria, that would make sense,” says Tabler. But he says American assistance to rebel groups is still too limited to have much impact on the strength and composition of the opposition.

There is little evidence at present that this will change. President Obama, already reluctant to risk another entanglement in the Middle East, sees a war in which protagonists on both sides are hostile to America and fears contributing to their success. The West had potential allies in the country, as well. It may still. But it seems they will be ever more on their own.