From "Heil Trump" to "A star is born," ten of the bizarre highlights from Donald Trump's Florida rally

From listening to Trump supporters hector media to watching a presidential arrival that belonged on a Hollywood soundstage, Anne Kingston shares 10 outtakes from Trump’s first campaign rally of the 2020 election—held a month into his presidency—in Melbourne, Fla.

1.Trump’s anti-media screed has proved emboldening
On Friday, the president tweeted that “fake news,” naming prominent mainstream outlets, was the “the enemy of the American people.” When media approached people waiting in line to enter the rally, they were asked “Who you with?,” before being subject to boos. When a journalist said “NBC,” he was booed. “Good luck with Megyn Kelly,” another man yelled, inciting a jeering crowd: “How many people want to boo Megyn Kelly right now.” The people from FOX Tampa got a cheer, but there was backlash against Fox host Shepard Smith who denounced Trump’s position on CNN as false. “He’s the next to go,”one man said. “CNN sucks, CNN sucks” was as popular a cheer as “USA, USA, USA.”  Another man approach by National Public Radio answered questions while berating the public broadcaster for receiving federal funds and being anti-Trump.

2. Trump as “Daddy”
Grown men in line repeatedly referred to Trump as a “grown-up:” “Finally, there’s an adult in the White House,” one said. More often it would be short-handed to “Daddy’s home” or “Daddy’s in charge now.” 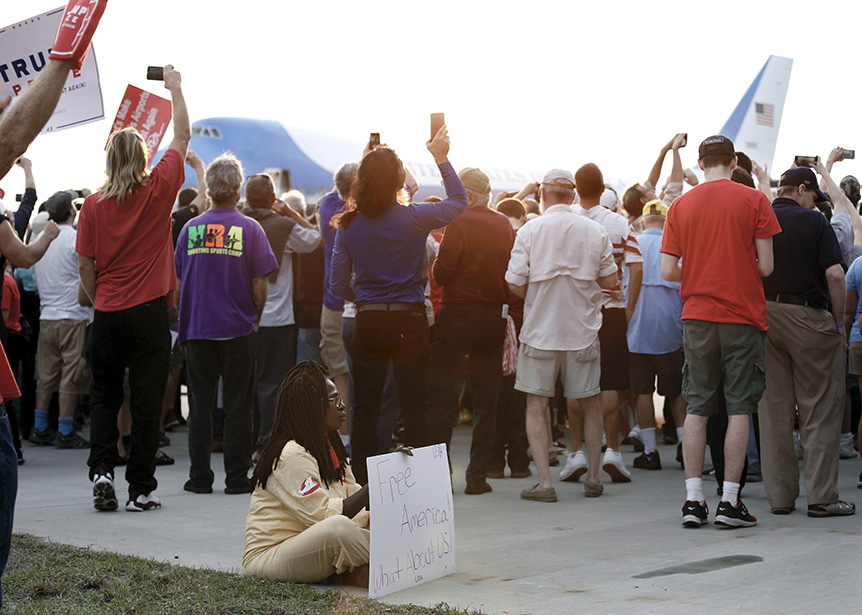 As supporters vie for an angle to see Air Force One and US President Donald Trump, Antoinette Elegele stages her own silent protest during a rally at the Orlando Melbourne International Airport on February 18, 2017 in Melbourne, Florida. (Gregg Newton/AFP/Getty Images)

3. Belief that anti-Trump protesters, even the women, are paid and violent
“People are being paid between $18 and $20 an hour to protest in California,” a young man told me.  When a group of women arrived in the protest area designated across from the airport wearing pink pussy hats, they were mocked: “Come get the hug your parents never gave you—not a rapey hug, a real hug,”one man yelled.

4. The ghost of Hillary remains: Even though Trump is president, his supporters can’t let it go
One was dressed in a “Deplorables for Trump” t-shirt holding a “Trump vs Tramp” “Hillary for Clinton” sign. Inside the rally, a man speaking before Trump’s arrival joked: “I can’t tell you how many attended the Trump inauguration, but I can tell you how many attended Hillary Clinton’s inauguration, and that’s all that matters.”

5. A man in line uttered “Heil Trump”
An older man in full Trump regalia made the comment, as if into thin air. No one around seemed to notice.

6. Trump supporters react swiftly to perceived injustice
As the line started to move into the hangar at 3 p.m., a few people tried to walk to the front. Those who’d waited for hours formed a human wall to block them. “The back of the line is behind us,” one man said, before scolding: “That’s not who we are.” There were also complaints that veterans were taking several people in to accompany them, beyond the one companion allowed. When a fleet of buses headed to the front door filled with well-dressed campaign insiders, one man muttered: “More people from the swamp that needs to be drained.” 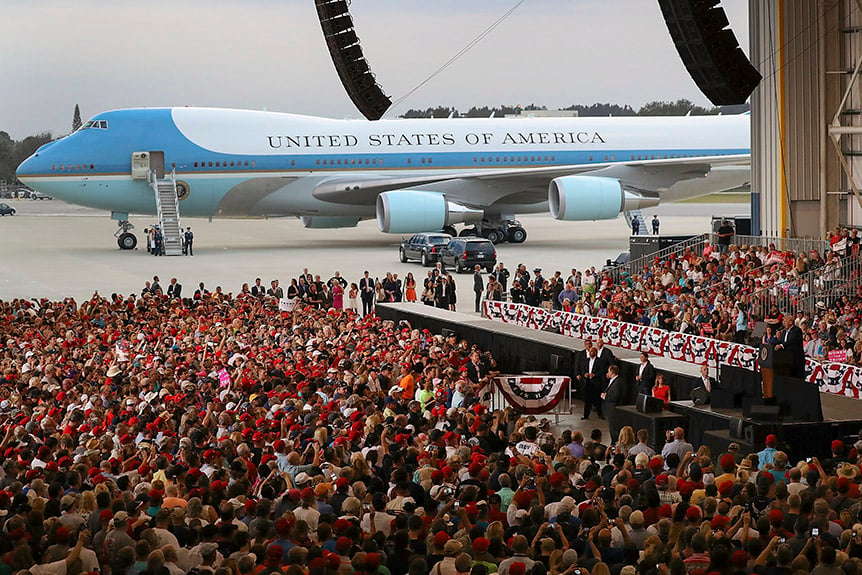 7. Trump’s cheesy Hollywood entrance
Trump, a president not known for punctuality, worked the build-up; Air Force One landed next to the hangar at 5:30, 30 minutes after he was scheduled to begin. Presidential seals were affixed to the podium to Free’s ’90s hit “All Right Now.” That song was followed by Elton John’s “Candle in the Wind,” a song about Marilyn Monroe played by John at Princess Diana’s funeral (it was in constant rotation last year during the Trump campaign). Then, the plane pulled up to the hangar to the theme of 1997 Harrison Ford movie Air Force One. The plane’s doors remained closed for almost 15 minutes, summoning images of a bad flight where people are stuck on the plane, before Donald and Melania Trump appeared.

8. The surprise wife and surprise prayer
The announcement that Melania Trump was with her husband ignited the crowd. The first lady, wearing a red dress coordinated perfectly to the shade of MAGA baseball hats, proceeded the president to the podium where she recited the Lord’s Prayer, a clear appeal to Trump’s Christian base. Trump mouthed words intermittently while glancing up at the crowd before uttering the last lines—”For thine is the kingdom/The power, And the glory/ For ever and ever”—with gusto. When he thanked his wife, he said he had no idea she was going to lead the crowd in prayer. 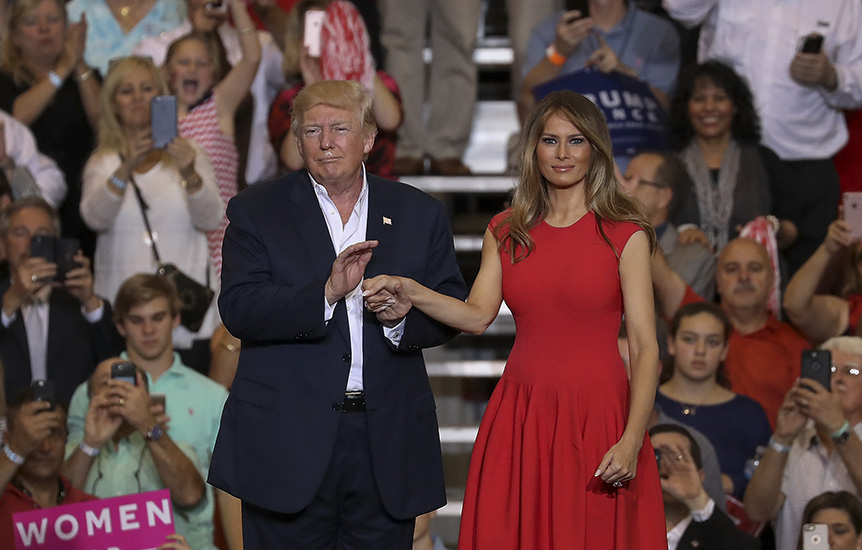 President Donald Trump and Melania Trump stand together during a campaign rally at the AeroMod International hangar at Orlando Melbourne International Airport on February 18, 2017 in Melbourne, Florida. President Trump is holding his rally as he continues to try to push his agenda through in Washington, DC. (Joe Raedle/Getty Images)

9. Trump’s continuing size fixation:
Presidency hasn’t bolstered Trumps’ obsession about crowds. On Saturday, the president combined his antipathy to the media with his size fetish before the thousands gathered in Melbourne. “The media won’t show this crowd,” he said, adding “It’s as big a hanger as it gets. This is where they put the big planes.” 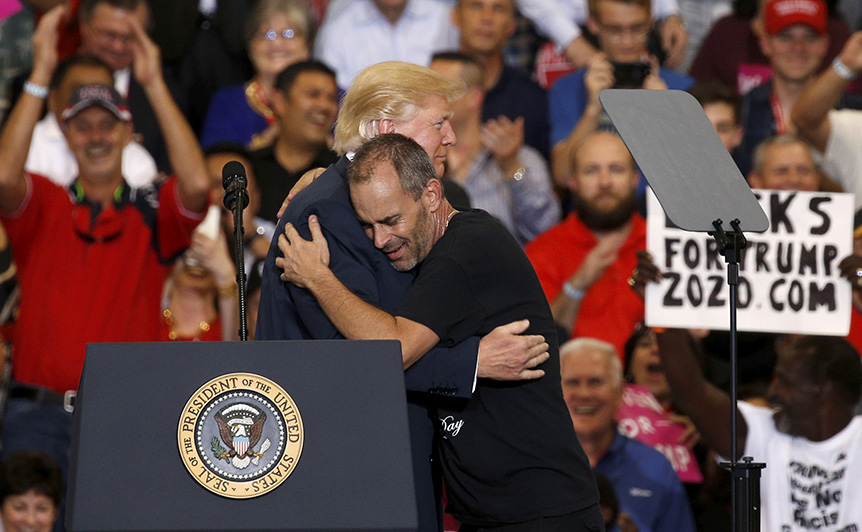 10. A made-in-America “star is born”
In what appeared an impromptu gesture, Trump called a man he recognized from television interviews conducted outside the rally to the podium. “This guy is so great…I love this man,” Trump said. “He’s been all over television, saying the best things.” The man, later identified as West Palm beach native Gene Huber who’d waited line line 13 hours, arrived on stage in an utter upending of Secret Service protocol. He spoke two lines: “We the people, our movement is the reason the 45th president of the United States is here today,” before saying he’d always had faith: “I knew he was going to do this for us.  “A star is born,” Trump declared, a testament that celebrity begets celebrity. At 7 p.m., Huber had 480 people following him on Twitter at @squeakey6; by 9 p.m. the number had jumped to 2,512. Huber’s account, up since October 2016, is a shrine to Trump. (His bio: “Donald J Trump, changed America.”) By night’s end, Huber had submitted to interview on that notorious “fake news” outlet CNN, describing how he salutes a life-size cardboard photo of Trump every day.