Christy Clark's Liberals should have skated to an easy victory in the B.C. election. Instead, she now faces an uncertain future. 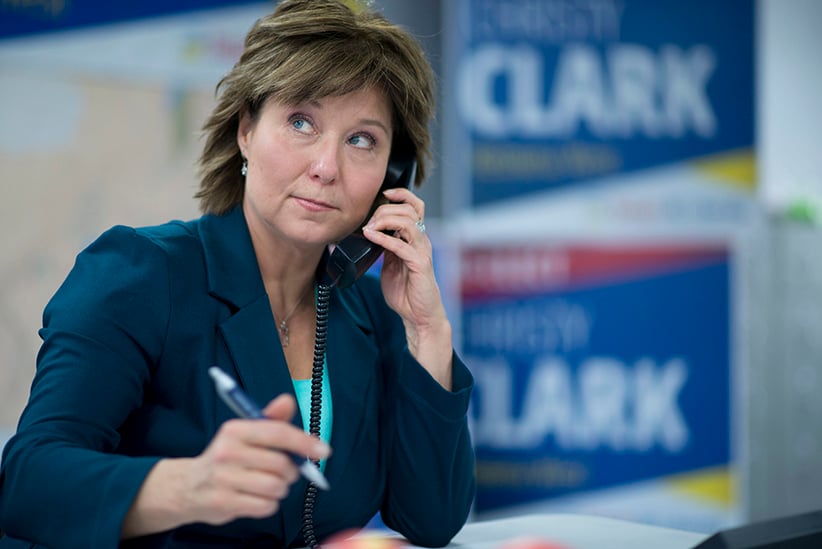 Early this morning, Christy Clark bounded onto the stage at Vancouver’s Waterfront Fairmont, site of the Liberals’ election night party. The British Columbia premier was dressed in a fiery red blazer, radiating energy, her face lit by her incandescent smile. “Tonight, we won the popular vote,” she shouted, whipping up the thin crowd. “And we won the most seats!” Punchy, wily: It was vintage Clark.

While everything she said was true, the Liberals were also repudiated by over half the voters in the province. Four of her cabinet ministers fell to defeat. In at least 16 ridings, the combined NDP-Green vote surpassed that of the Liberals, and the party was pretty well shut out of Greater Vancouver.

The 43 seats the Liberals took last night were enough for a minority win—B.C.’s first since 1952. But it’s a stunning setback for the party. The real winner of the night was Andrew Weaver, the Green party leader. The 56-year-old Cambridge-trained climate scientist managed to triple his party’s seat count to three, increasing the party’s percentage of the vote to 16 per cent. If absentee ballots don’t alter results, Weaver could ultimately wind up playing the role of kingmaker, by forming a coalition with either the Liberals or NDP; the New Democrats took 41 seats, three shy of the 44 needed to form a majority.

Clark should have skated to victory. B.C. boasts the country’s top job creation rate, and its top growth rate. The balanced budget the premier delivered this spring was her fifth in a row. She had no internal critics, a $36-million war chest at her disposal.

Why wasn’t it a recipe for victory? Lulled, perhaps, by the strong mandate she won four years, Clark seemed to gradually lose the pulse of the province.

How B.C.’s political landscape changed between the 2013 and 2017 elections

A narrow, unimaginative focus on limited government and job creation left no room for innovative policy, like the carbon tax her predecessor, Gordon Campbell introduced, a North American first. In pushing the party to the right, Clark managed to quash B.C.’s upstart Conservative party, which had been draining support for the right flank of the party’s Liberal-Conservative coalition. But she moved her Liberals far to the right; hers is now arguably the most conservative Liberal government in the country. She grew deaf on key issues—affordability, sustainability, the influence of Big Money on politics. Her ‘everything is awesome’ mantra rang hollow to those having trouble making rental payments in Vancouver’s out-of-control housing market. Stagnant or falling earnings have put the squeeze of middle and working class households, particularly in the Lower Mainland. B.C. is getting richer, as Clark likes to say, but the average British Columbian is certainly not.

The gap between rich and poor has risen sharply under the Liberals, with the top 10 per cent now controlling 60 per cent of wealth in the province. Yet homeowners in the province are now subsidized to the tune of $1.25-billion every year (more, by far, than in any other province). Clark went into the campaign with a steady-as-she-goes platform, promising more of the same.

Falling resource revenues recently forced Saskatchewan premier Brad Wall, Canada’s conservative standard-bearer, to introduce an austerity budget. But in his first three years in office, Wall increased public spending by 30 per cent. And his recent austerity budget included $1-billion in tax increases. (His only real big tax cut has been to increase the basic personal income tax exemption, which primarily benefits low-income earners—“Hardly a declaration of war on socialism,” as the Regina Leader-Post once wrote.)

For her part, Clark – who made headlines for taking bus passes away from disabled people last year – has steadfastly refused to raise welfare rates in B.C., which now the second lowest in the country. B.C. also boasts Canada’s second-highest child poverty rate, and the second-lowest rate of student funding. As premier, Clark has never marched at Vancouver Pride, not even in the wake of last year’s Orlando shootings, which put a renewed focus on hate, intolerance and its consequences. (Shortly after taking office last year, Manitoba’s Conservative Premier, Brian Pallister marched in Winnipeg Pride.) Clark claims the so-called “free enterprise coalition,” the anyone-but-NDP coalition of federal Liberals and Conservatives is “stronger than it’s ever been.” But many on the centre-left have appear to have defected.

So it was a morose crowd that waited long into the night at the Fairmont ballroom for Clark to arrive. All three leaders stayed huddled in their camps for hours after the polls closed, not wanting to address supporters—or even be photographed—until results became clear. Clark took to the podium first, opening with a joke: “Some things only happen in British Columbia,” she said, her teenaged son Hamish at her side. “It is my intention to continue to lead British Columbia’s government,” she said, to raucous cheers, delivering the first of the night’s three victory addresses.

“What I do know,” said the NDP’s John Horgan, who spoke next, “is a majority of British Columbians voted for a new government, and I think that is what they deserve.” Clearly, there is much to be decided yet.