In B.C. election 2017, the Green Party could be kingmakers

On the eve of the election, Andrew Weaver has gotten his party into B.C.'s political conversation. The NDP should be worried. 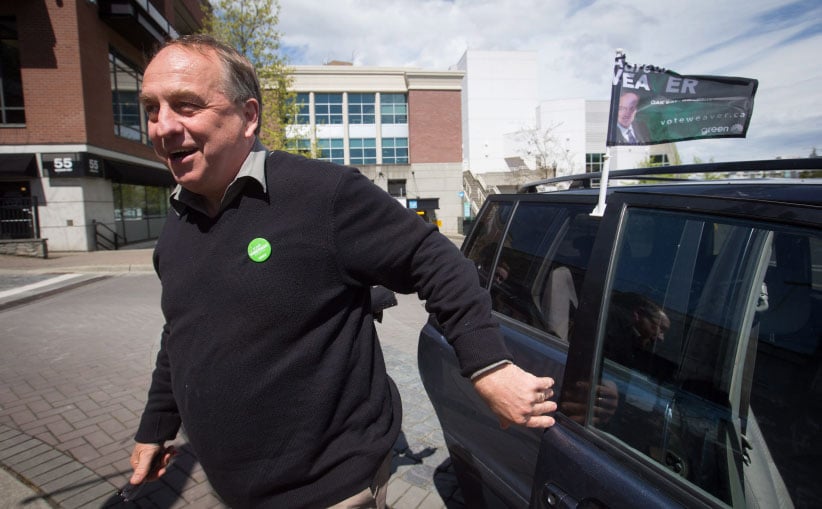 Weaver gets out of a vehicle to stop to talk to reporters outside a campaign stop by NDP Leader John Horgan in Nanaimo, B.C. (Darryl Dyck/CP)

The Greens have hit more than a few high points in B.C.’s 2017 election. For the first time, they have a dozen staff running their party headquarters. They’ve raised $1 million since the last provincial election, in 2013. They’ve been endorsed by David Suzuki, Canada’s best-known environmentalist. And in Andrew Weaver, a Cambridge-trained climate scientist who was part of a team that shared a Nobel Peace Prize with Al Gore, they’ve found a recognizable leader with something like charisma. These are some of the reasons the party, for the first time in its 35-year history, could play a significant role in B.C’s election.

If there was a low point for the Greens during the campaign, it came during an interview last week, when Weaver sat down with Keith Baldrey, a Global News veteran. Baldrey asked the 55-year-old Victoria native which rival leader he would prefer to work with: the Liberals’ Christy Clark, or the NDP’s John Horgan? Not rocket science. Indeed, it’s hard to imagine a more obvious question for a third-party leader who has the potential to play kingmaker in the case of a minority government. But Weaver waffled. He complained he was being put on the spot—precisely the point of these prime-time interviews days out from an election.

Weaver then appeared to endorse Clark, chiding Horgan: He’s “exploded on me multiple times,” Weaver said. “I want to work with him, I really do, and I’ve tried and I’ve continued to try but he’s got to control his temper.” With Clark, Weaver added, “you can have a respectful disagreement in a one-on-one conversation and it’s not personal.”

RELATED: The B.C. election and the folly of strategic voting

A headline implying Weaver would back Clark over Horgan immediately caught fire on social media in B.C., forcing Weaver (and Global) to clarify: he wasn’t suggesting he would throw support to a Liberal minority government. But by then it was too late—which for the Greens might not have been such a bad thing. The message also signalled to disaffected Liberals that this was not the radical fringe party they’d grown used to ignoring. For those unable to stomach the idea of drawing an X beside the initials NDP, Weaver suddenly seemed like a palatable, potential alternative.

The Green Party’s strength is on Vancouver Island, traditionally New Democrat territory. There, the NDP holds 11 seats, compared with two for the Liberals. This time, the Greens look poised to steal a second Island seat from the NDP. And some polls put their Island-wide support above 30 per cent—ahead of the NDP’s 28 per cent. By splitting the centre-left vote, and not just on Vancouver Island, a surging Green Party could open the door to a strengthened Liberal majority tomorrow. That’s why Horgan spent Friday campaigning up and down the Island, repeating a single message: “We need to come together.”

If the province-wide polls that have the Liberals and NDP tied at 39 per cent are accurate, Weaver could end up answering Baldrey’s question once and for all. But since pollsters are mostly using the same methodology that proved flawed in 2013—robocalls and internet surveys—Liberal support might well be understated. If so, Weaver is likely slated to play a different role altogether, that of NDP spoiler.

Follow the link below to get real time results on election night: