The B.C. mayor who promised to fire the RCMP

An old hand in Surrey politics has found new life in the role of populist, socially liberal, law-and-order suburban disruptor 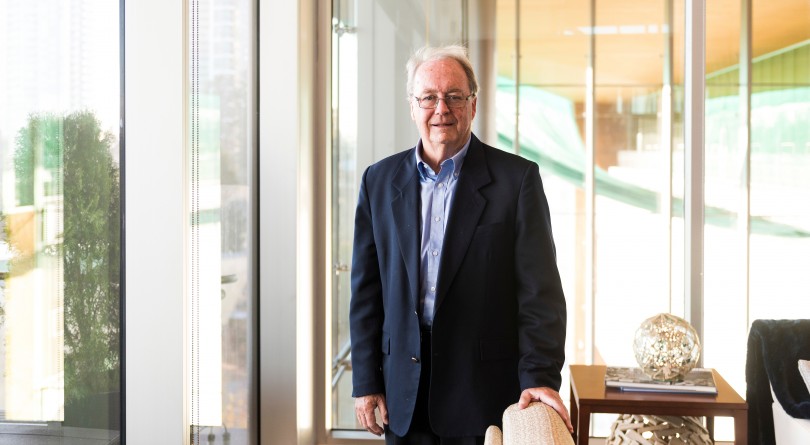 Surrey Mayor Doug McCallum at his office at city hall in Surrey, B.C., on November 19, 2018. (Photograph by Jimmy Jeong)

At the first gathering of Surrey’s new city council, a day usually reserved for the swearing-in ceremony, Mayor Doug McCallum and his council set to work. They passed two motions that will dramatically alter the course of B.C.’s second-largest city. They pledged to ﬁre the RCMP and form a municipal police force, and to scrap a light-rail transit line that was part of a regional deal co-funded by the provincial and federal governments. Surrey announced it will instead lobby for a SkyTrain line to neighbouring Langley. At 73, McCallum looks ﬁt and trim and says he’s revved up over politics like never before. With his strong majority council, he is poised to be one of B.C.’s biggest political disruptors in 2019. “That’s what people said they wanted—get in and get things turned around,” McCallum says.

He may be playing the role of reformer, but this isn’t McCallum’s ﬁrst rodeo. He was elected to Surrey city council in 1993, became mayor in 1996 and served three terms until he was trounced by one of his councillors, Dianne Watts. When Watts left civic politics to run federally, her Surrey First coalition ran out of steam and gave McCallum his comeback opportunity.

He formed the Safe Surrey Coalition and ran a populist, law-and-order campaign based on, he says, cries from grassroots voters. “They felt our community had become unsafe. They were scared of all the gun violence and the shootings that were going on.”

In truth, Surrey’s crime statistics have been dropping. A recent Maclean’s tally of violent crime in Canadian cities shows it now ranks below Vancouver, Edmonton, Saskatoon and Toronto when it comes to crime severity. Murders are on a similar downward trend. Still, there’s no doubt public shootings associated with Surrey’s gang problem have been a badge of shame for the municipality. In June, community fears spiked when a respected hockey coach was shot and killed in a case of mistaken identity. McCallum believes Surrey long ago outgrew the RCMP, which has policed the city since 1951. He says residents are prepared to pay a bit more for a municipal force, allowing enough ofﬁcers who are fully invested in the community to be hired and trained for urban policing.

Critics like Watts, who went on to become MP for South Surrey-White Rock, say the cost of dumping the Mounties will prove higher than McCallum lets on and argues switching forces won’t make gangs vanish. “But in any election,” she says, “you need a wedge issue.”

Still, McCallum’s campaign tapped into more than just fear. Surrey residents have long felt like Vancouver’s poor country cousin, wanting a bigger share of the pie for their city, which has surpassed the 500,000-population mark and is growing by 1,000 people per month. Resentment is particularly acute among commuters routinely stuck in gridlock, says former city councillor Barinder Rasode, and McCallum tapped into it: “They didn’t feel the past four years they had a representative on the regional level who was going to ﬁght other cities on their behalf.”

McCallum’s promises will cost money, and lots of it, which could clash with his determination to run a tight ﬁscal ship. “When I left Surrey as mayor,” he says, “the city was in great ﬁnancial shape with $300 million in cash reserves and no debt.” McCallum says he was galled to learn that Surrey is now $293 million in debt and has low cash reserves.

RELATED: What electoral reform could look like in British Columbia

Watts did spend to construct a new town centre along the existing SkyTrain route in Whalley, a down-at-the-heels neighbourhood in need of a boost. Low-rent housing and retail have given way to a new city hall, a multi-level public library and Simon Fraser University’s Surrey campus. On a recent winter’s evening, the square outside city hall was abuzz with a ﬁlm crew shooting an episode of The Good Doctor.

McCallum’s spacious corner ofﬁce, with its floor-to-ceiling windows, seems a refreshing change from the old city hall, which, although more central, was nowhere near a train line. He didn’t approve of the move and the new building isn’t growing on him: “It’s too sterile, and it put Surrey in a huge hole ﬁnancially.”

McCallum’s fiscal-conservative side can make him sound a bit curmudgeonly. But he describes himself as a social liberal and says he will push to improve housing prospects for Surrey’s homeless population. During his political hiatus, McCallum sat on the Law Foundation board, which helps fund the First United homeless shelter in Vancouver. The agency was struggling ﬁnancially, and McCallum, who is good with numbers, volunteered to help set things right.

Now his attention is focused on Surrey’s problems. McCallum knows his stance on the RCMP and LRT will ruffle feathers, but makes no apology for blowing up the status quo: “I’m just a messenger for the community. They’ve decided to put their trust in me.”