Mario Beaulieu is practically unelectable, writes Martin Patriquin —but in the face of a financial crisis, that’s the least of the party's worries 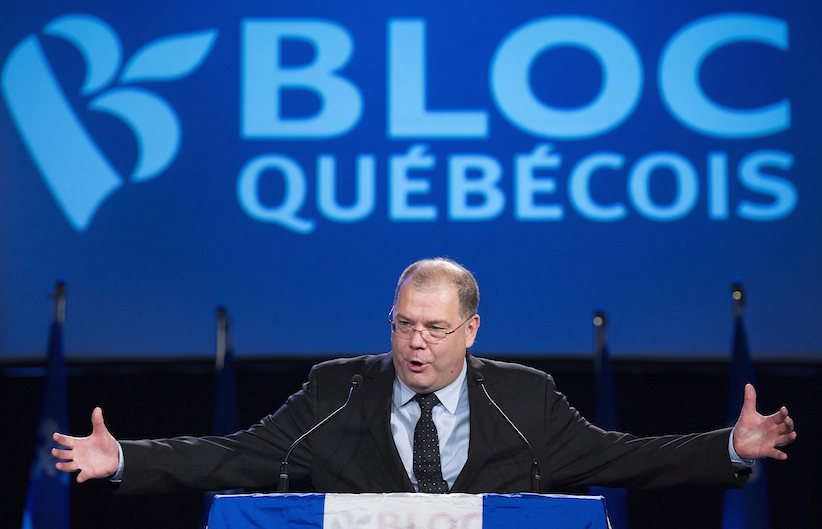 On the odd chance that you have 40 minutes to kill today and are feeling mildly masochistic, have a look at this video. In it you’ll see Mario Beaulieu, the new leader of the Bloc Québécois, which until recently was the dominant federal political force in Quebec for roughly two decades.

In the video, shot in 2012, Beaulieu parades around downtown Montreal in a horse-drawn carriage, pointing out rampant alleged language crimes committed on much of the city’s signage. He rails against Starbucks, Old Navy and Banana Republic. He humbly (and seriously) suggests to the handful of like-minded followers that Future Shop should be “Boutique du futur,” Levi’s should be “Lévi,” and declares that everything from governmental services to the Internet should be French-only within Quebec’s borders.

It’s a sad development for the Bloc, which was reduced to four MPs in the 2011 election. The party stormed into being under the leadership of Lucien Bouchard, becoming Canada’s official Opposition in 1993 while Bouchard himself revitalized the 1995 Yes campaign to within inches of his goal of a separate Quebec. Then came Gilles Duceppe, a peerless orator and a picture of blue-eyed indignation at any perceived slight against the province. Now the party has as a leader a guy whose idea of a good time is to have a horse pull him through the streets of Montreal as he yells at commercial signage.

Clownish as he is, though, Beaulieu is hardly the Bloc Québécois’s biggest problem. Beyond its obvious conundrum—with only four MPs, the BQ is less “bloc” than “afterthought”—as well as the long-term demographic decline in support of Quebec sovereignty, the party faces a financial crisis in the short term that it won’t likely survive.

The Bloc arguably owes its continued existence to noted anti-sovereignist Jean Chrétien, who in 2004 instituted an inflation-adjusted subsidy of $1.75 per vote for every political party in federal elections. Ostensibly put into place to curb the influence of corporate donors—and to thumb the eye of his hated successor, Paul Martin—Chrétien’s subsidy acted as a lifeline for the Bloc, whose fundraising has long lagged behind other federal parties. An example: according to a Maclean’s analysis of Elections Canada data, the Bloc raised about $164,000 in 2012. The Liberals, meanwhile raised $600,000 in Quebec that same year.

The per-vote subsidy was worth nearly $3 million to the Bloc in 2004. Even in 2011, when the Bloc lost all but four of its MPs, mostly to the surging NDP, Chrétien’s wee gift kept on giving, to the tune of $1.8 million—plenty of money for the next election, particularly since the Bloc only has to campaign in one province. Alas, the party is coming to an end; as per the Conservative government 2011 promise, the per-vote subsidy will disappear by the 2015 election.

The vacuum will be difficult to fill. In 2013, the Bloc raised all of $417,000—and that was before the roving political liability named Mario Beaulieu took the helm. Fielding 75 candidates on that kind of money, particularly when much of the sovereignist establishment find Beaulieu imbuvable (unbearable), will be difficult indeed. Upon winning the leadership, Beaulieu promptly congratulated himself on Twitter and led his supporters in a hardy rendition of an FLQ-era chant. In short: Beaulieu is practically unelectable—and that’s the least of the Bloc’s worries these days.