The Liberals started their campaign here, but they could be the last party on B.C.'s minds. Meanwhile, the Green Party looks for gains. 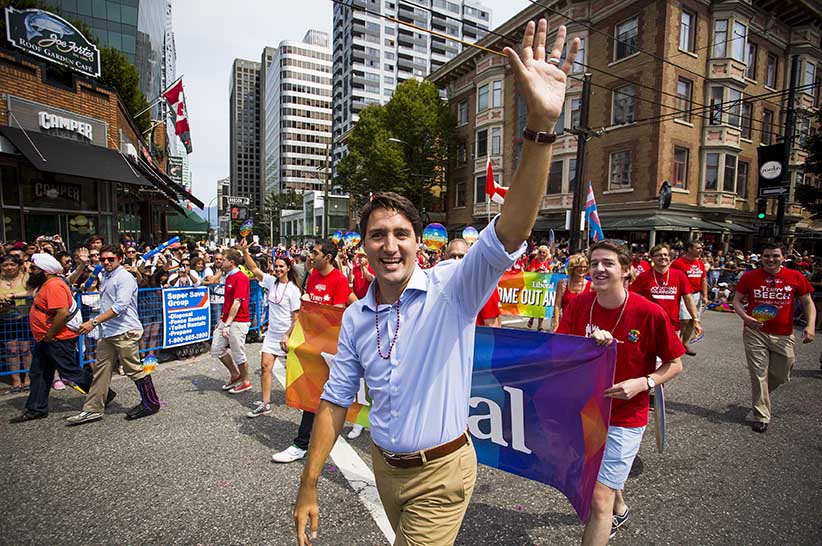 To Stephen Kukucha, the veteran Vancouver Liberal organizer, campaign kickoffs are all about “contrast,” meant to showcase everything the other guys are not. Kukucha’s comments go a way to explaining the strategy behind Liberal Leader Justin Trudeau’s bold Day 1: Hours after the other two front-runners had delivered their opening campaign remarks in Eastern Canada, Trudeau launched his campaign from British Columbia, his “second home.” Where his opponents seemed funereal and scripted, he appeared at ease, switching from French to English, then back again, taking questions until reporters had none to ask. After ditching his dark suit, Trudeau then headed for Vancouver’s Pride parade in khakis and a sky-blue shirt, where he high-fived, bro-hugged, and indulged every selfie request, keeping his brand-new security detail—who copped to having a tough time keeping track of him—on edge.

“He’s not stiff. He’s real,” said Carl Meadows, who was marching with Foundation of Hope, which assists LGBTQ newcomers to Canada. “He gets bruises and bumps. He’s okay being vulnerable.” But whether that humanness will be enough in the difficult B.C. battleground—or the rest of the country, for that matter—is very much an open question.

But as much as he loves this province, it may not love him back in equal measure. Although Trudeau is well-liked in B.C., where his roots run deep—he taught high school in Vancouver, and his maternal grandfather was a North Vancouver MP and cabinet minister—Max Cameron, who teaches politics at the University of British Columbia, sees a real danger of the Liberal vote collapsing here in this election, “leading to a fundamental realignment to a two-party system.” The Liberals, who won just two seats in B.C. in 2011, are increasingly being pushed out of the local race; B.C. is shaping up to be a two-way fight between orange and blue.

No surprise then, that the NDP was also a major presence at Vancouver’s Pride events last weekend. Candidates rode an “orange wave”-themed float, some parading in beach wear with tiny surfboards bearing their names. Cameron says the NDP’s local messaging is aimed at “people who voted Conservative in the past, but have decided it is time for a change.” That’s not as incoherent as it might seem, he adds: “This is hardly the party of Tommy Douglas.”

With a number of senior Conservatives hanging up their hats, including the party’s B.C. lieutenant, James Moore, the Tories are expected to rely heavily in B.C. on their star recruit, Dianne Watts, Surrey’s long-serving former mayor, who describes herself as a small-c conservative with a huge social conscience. To some extent, she’ll be asked to defend the government’s focus on resource extraction, which raises an important cleavage issue for B.C., says Cameron: “The economy in the province’s Interior is resource-based, while in Vancouver, it’s oriented to clean tech and high tech.”

Pipelines and climate change are also top-of-mind issues, particularly after this summer’s massive fires. B.C. also happens to be the only province where the Greens have substantial support, at 21 per cent; they’re hoping to make gains with a new pitch. 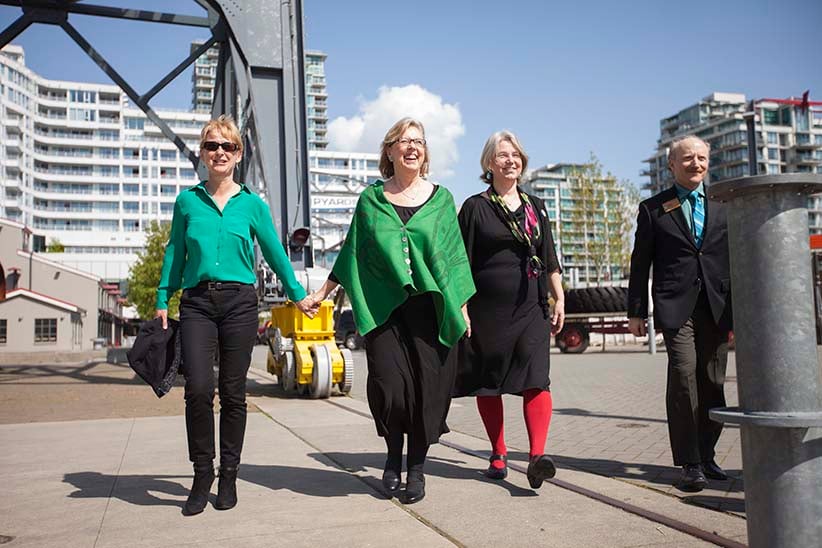 On a steamy afternoon last weekend, a crowd filtered into the battered North Vancouver storefront campaign headquarters of Green candidate Claire Martin, the former chief meteorologist for CBC, for a townhall chaired by Green Leader Elizabeth May. Many in the mostly fiftysomething crowd had been out door-knocking in the newly configured riding of North Vancouver. Martin freely admits she faces an enormous challenge. The Greens polled just five per cent of the vote last time, when the riding included a larger slice of North Vancouver District, while Conservative Andrew Saxton won handily with almost half of all votes cast.

The crowd peppered May with the questions and concerns they’ve heard at the door, especially the fear that a strong Green showing will steal votes from the Liberals and NDP, and allow the Conservatives to slide up the middle. May cited the example of her own riding of Saanich-Gulf Islands, where, in the 2011 campaign, even her friends said she’d split the vote and allow Conservative cabinet minister Gary Lunn a free ride back to Ottawa. Instead, May won handily, growing the Green vote in the riding from about 10 per cent in 2008 to almost 47 per cent in 2011.

May’s pitch to voters is the prospect that the Greens could hold the balance of power in a minority government. She told the crowd her party would be willing to put aside “hyper-partisanship” and work across party lines. “The last time that happened in Canada was almost 50 years ago, when the NDP under David Lewis worked with Liberal Lester B. Pearson.” The agreement for Green co-operation “would have as its basis two things: climate and proportional representation.” Another condition of any Green support would be the repeal of Bill C-51, the government’s anti-terrorism legislation—“the most dangerous thing I’ve ever seen in a democracy,” said May.

Locally, the Liberals have been stung by their support for the bill, which has proven to be a much larger issue than anticipated, says Cara Camcastle, who teaches politics at Simon Fraser University. “Most of the time, except for political junkies, very few people can name the number of a piece of legislation,” says NDP MP Peter Julian. “This is one of those rare occasions where, when you say ‘C-51,’ most British Columbians know what you’re talking about and they care about what’s happened.”