The Canada-U.S. borderlands: How our closest neighbours voted

The Democrats have won the popular vote in border counties four elections in a row, but Trump made regional inroads from sea to sea—even as he lost his bid for re-election 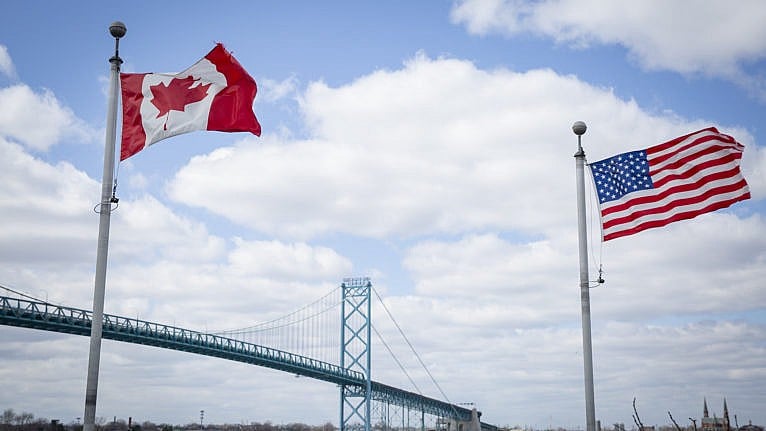 The Ambassador Bridge spans the Detroit River to connect Windsor, Ontario, to Detroit, Michigan (Tara Walton for The Washington Post via Getty Images)

Port Angeles and Port Clinton are a match made in America. Port Angeles, in the Pacific Northwest, overlooks the Salish Sea. Thousands of miles away, Port Clinton is tucked into a corner of Lake Erie. Much of the country divides them, but they’re so much the same. Port Angeles holds an annual salmon derby. Port Clinton is the walleye capital of the world. Port Angeles named one of its main drags after a wartime president, Abraham Lincoln. Port Clinton gave the honour to another, James Madison. They both watch ferries leave their docks, whisking passengers north in the direction of Canada. And they have an uncanny knack for voting for the winning candidate in presidential elections.

Port Clinton is the seat of Ohio’s Ottawa County, which had picked 13 in a row going back to Lyndon Johnson in 1964. The county stuck with Trump, same as so many bellwethers scattered across the land, ending its streak. The new title holder for Nation’s Best Bellwether is Washington’s Clallam County, where Port Angeles is the county seat and voters were last wrong in 1976, when they joined the rest of the state in voting for Gerald Ford over Jimmy Carter.

That two bellwethers sit on the Canada-U.S. border is pure chance, but a Maclean’s analysis of the dozens of counties that line that border reveals factoids that political trivia nerds could dissect late into the night. They offer a collective microcosm of broader American polarization, from the urban-rural divide to a stubborn refusal to swing from one candidate to another. And then there are the startling exceptions: blue blotches in a sea of red, and red surges even within blue strongholds. These charts illustrate how the northern borderlands helped crown the next president.

How many border voters went to the polls

If Biden’s goal was to get out the Democratic border vote at Obama levels, the president-elect failed miserably. If Trump’s goal was to expand his voter base considerably, he also came up short. Even as turnout increased in almost every county across America, fewer actual border voters have turned out in every election since 2008. Trump did manage to win over a sizeable chunk of votes that went to Green and Libertarian candidates in 2016, but neither party was able to come close to the nearly five million border votes cast in 2008.

The border vote vs. everyone else

For the last four elections, Democrats have outperformed their national vote and Republicans have underperformed their own. Obama was at or near 60 per cent of the border vote before 2016, when Trump made his mark. As with so many graphics comparing the Obama wins to the Trump and Biden victories, this is a tale of two clear trends.

Who won the most counties?

Eighty counties line the Canada-U.S. border. (Alaska, which organizes itself into boroughs instead of counties, only releases results by state congressional district.) In 2008, Barack Obama won the majority of them, 49 to 31, over John McCain. His haul included nine of 16 counties in Michigan, all seven in Ohio and another nine of 12 in New York. Obama lost a lot of ground in his re-election campaign, but then Donald Trump swooped in and stomped all over the Democrats. In 2016, Trump won 14 in Michigan, four in Ohio and nine in New York. Biden wasn’t able to gain much ground. He flipped three counties, but lost two—barely moving the dial. In some ways, the Canada-U.S. border vote is a microcosm of the nation. Democrats lose the vast majority of counties but, on the strength of big cities, win the popular vote.

Two of the busiest Canada-U.S. border crossings are in Detroit and Buffalo, which sit at opposite ends of Lake Erie. In between those two cities sits Cleveland, the biggest urban centre in Ohio. The trio accounted for nearly two million border votes in 2008 and just over 1.8 million in every election since. Turnout is somewhat flat, but the vote split between Democrats and Republicans has been anything but. It’s a familiar trend for the borderlands. Neither Hillary Clinton nor Biden could match Obama’s voter appeal, though they both easily carried Cleveland and Detroit. Buffalo appears to be more competitive for the Republicans, though New York state still had thousands of votes to count a week after the election—and that might widen the gap.

In northwestern Pennsylvania, greasy-spoon dinors carry a mysterious spelling. The fourth-largest city in the state, Erie, graces the shores of its namesake lake. Nobody in town is mining for precious metals, but one local dinor is named Gem City—a nickname possibly attributed to the sparkling Great Lake. It’s a quirky town with a new electoral footnote. Three counties on the Canada-U.S. border voted twice for Obama, once for Trump and then for Biden. Erie is one of them. The others are Clallam and Montana’s Blaine county, itself a bellwether that’s only been wrong once in the last century. The Milk River, a tributary of the Mississippi that creeps north into Alberta, runs through Blaine, where 45 per cent of residents are Native American.

The three regions, all of which flipped from Trump to Biden, couldn’t look more different: coastal mountains, big sky country and a moody Great Lake. Local voters in the three counties, however, appear to have similar habits. Obama carried Erie and Blaine by wide margins before they tightened. Clallam was never a blowout.