Is a ban on floor-crossing politicians unconstitutional? 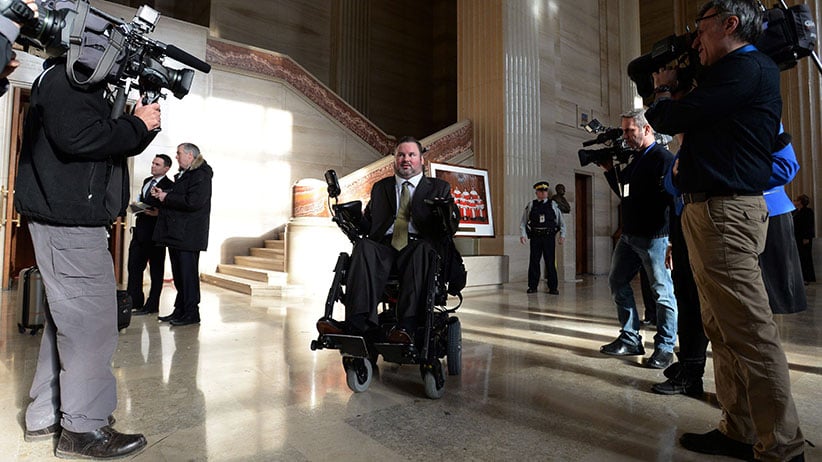 Over the years, a number of adjectives have been applied to the practice of floor-crossing. Opportunistic. Unethical. Sleazy. Duplicitious. Principled. Undemocratic. To this list, Steven Fletcher would like to add “Charter-protected.”

Fletcher, a former Conservative minister who lost his federal seat in 2015, thought he had found new political life the following spring, when he was elected a Progressive Conservative MLA in Manitoba. After several bouts of speaking against the party line, the notoriously free-spirited Fletcher got turfed by the governing Tory caucus, leaving him as an independent. He insists he has no wish to join the Liberal or NDP benches, but nonetheless filed a court challenge this week against a Manitoba law that bans him from doing so unless he resigns his seat and faces re-election.

The haters of politicians switching parties declare it a betrayal of voters who cast ballots for that candidate’s particular team flag. Defenders call it a part of the Westminster political system, which prioritizes the individual elected official over parties. Winston Churchill, they note, was one of its avid practitioners, crossing the floor twice during his storied career.

But the fact that it’s a time-honoured, Churchillian convention didn’t stop Manitoba MLAs from legislating against it in 2006. They did so to capitalize on public outrage over David Emerson joining the Harper Conservative Cabinet shortly after getting elected as a Liberal MP and Belinda Stronach crossing in the opposite direction a year earlier to secure the Paul Martin government’s survival and a Cabinet seat for herself.

READ MORE: Steven Fletcher introduces himself to the Manitoba legislature

Convention loses to legislation, but legislation loses to the Charter of Rights and Freedoms. Fletcher, now the independent MLA for Assiniboia, is arguing that the ban infringes on his freedoms of expression and association, and—in a surprising twist—on the voting rights of his constituents. When then-premier Gary Doer introduced the bill, he insisted the ban safeguarded voters’ trust that when they vote for a Tory, they get a Tory. But Fletcher’s legal brief flips the democratic argument: denying him the right to join another party, he argues, deprives him of important privileges when it comes to Question Period, private member’s bills and legislature scheduling—things accorded to party caucuses yet withheld from independent members.

The ban seems additionally problematic given that Fletcher didn’t ditch the Tory caucus either for gain elsewhere (like a Cabinet post) or to kneecap his colleagues; they dumped him. In effect, he is an MLA marooned, and much disempowered politically for it. “They expel him, the rules prevent him from joining another caucus, and his constituents are poorly served,” says Emmett Macfarlane, associate professor of political science at University of Waterloo. A specialist in constitutional law and Parliament, Macfarlane believes Fletcher has a strong case that the crossing ban hinders his political expression and association. He is keen to see how the Manitoba government might defend its law—what pressing importance there was to enact it that overrode harms to an MLA’s rights, and those of voters to be effectively represented.

Manitoba is currently the only province that prohibits the inter-party do-si-do. New Brunswick’s Tory government passed similar legislation in 2014 after bitterness over losing a pair of MLAs to the Liberals; the Liberals, once they regained government, voted to reverse it in 2015. When Doer’s NDP government enacted the ban in Manitoba, there hadn’t been a provincial floor-crossing case since 1986, yet the New Democrats were aping a policy long touted by their party’s federal MPs. Furor over recent federal switchers was so great that Manitoba’s opposition Tories voted with the NDP in favour of the ban, with scarcely any debate other than agreement from the PC leader at the time.

RELATED: Steven Fletcher and the perks of being punted from cabinet

“I can understand why party leaders would like this legislation,” says Bill Gange, Fletcher’s lawyer. “It’s legislation that gives them a lot of control over their backbenchers.” If an elected member is weakened greatly by a caucus defenestration and cannot climb back in through another party’s window, then she or he is basically beholden to the caucus’s and leader’s whims. Gange’s legal brief states: “Proper and full representation of his constituents requires that the applicant explore all of his options to most fully represent the views of his constituents, including securing additional resources to do so through joining another recognized political party.”

It’s instructive, too, to look at which parliamentary systems elsewhere in the world have cracked down on party switching and even voting across party lines. They’re more common in less established democracies, where the risks of political corruption and the lure of party inducements tend to be greater, and where leaders consolidate political power—in Belize, Nepal and Zimbabwe, anti-defection provisions have been enshrined in national constitutions.

Don Desserud, a political scientist at the University of Prince Edward Island, also doubts the Manitoba law can withstand a Charter challenge. A government can’t require through legislation that a member always vote as a Liberal because he or she was elected as one, and the right to choose one’s caucus is no different, he says. “Does the government party have the right to tell an opposition party they’re not allowed to have somebody sit in a room with them?” Until 1931, House of Commons members were required to resign their seats and test voters’ will in a by-election if they were appointed to Cabinet, based on the notion that voters were electing a mere local MP and now must approve his or her new role; Manitoba’s ban hearkens back to that pre-constitution rule, Desserud says.

One potential saviour for this ban is courts’ deferential tendency to not interfere with the rules and operations of Parliament and provincial legislatures, Macfarlane says. Those internal rules have, as well, gradually given more powers and legislative control to political parties rather than to individual MPs or MLAs—to the point that, now serving as a politician without a political home and unable to find one, Steven Fletcher is denied his constitutional ability to do his job. He’s hoping that no matter how wrong many voters consider it, floor-crossing is a right.