The dominant power in Quebec: the CAQ

Philippe J. Fournier: One year in, the party maintains a commanding lead, and this week could record an historic by-election win 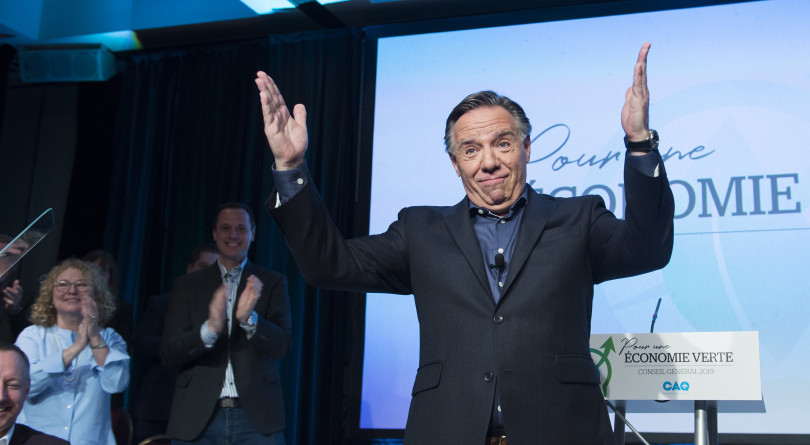 Quebec Premier and CAQ leader Francois Legault speaks during the party's general council meeting in Montreal on May 26, 2019 (Graham Hughes/CP)

While its political honeymoon may be starting to wane in Quebec 14 months after its election victory, François Legault’s CAQ remains a dominant force in the province’s political landscape according to the latest data. In a Léger poll published earlier this week in Le Journal de Montréal, the CAQ’s level of support was measured at 38 per cent throughout Quebec, a number roughly similar to its 2018 Quebec election result.

However, among francophone voters (who constitute the majority of voters in more than 100 of the province’s 125 seats), the CAQ leads the field with 46 per cent of support—more than 20 points ahead of the Parti Québécois, and a crushing 30 points ahead of the Quebec Liberal Party. Without a shred of a doubt, Legault would win another easy majority at the National Assembly with such levels of support.

Here are the Quebec-wide results from the Léger poll: 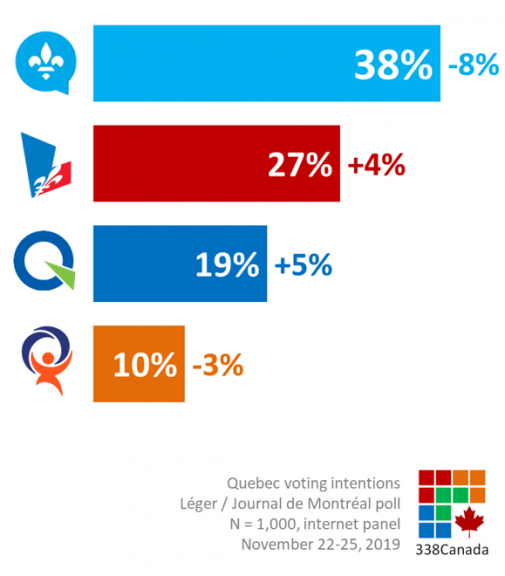 The numbers above are compared to the previous Quebec Léger poll published way back in May 2019. The CAQ drop of support from the mid-40s to the high-30s has been widely analyzed as marking the end of the honeymoon for the CAQ, even though the government’s approval rating remains at a historically high level. Indeed, according to the poll, 60 per cent of Quebec voters remain generally satisfied with the government, a number we hadn’t seen in Quebec from a party after its first year in power since the 1980s.

When we break down this poll by regions and use the latest election’s results as a baseline, the 338Canada electoral model calculates this seat projection: 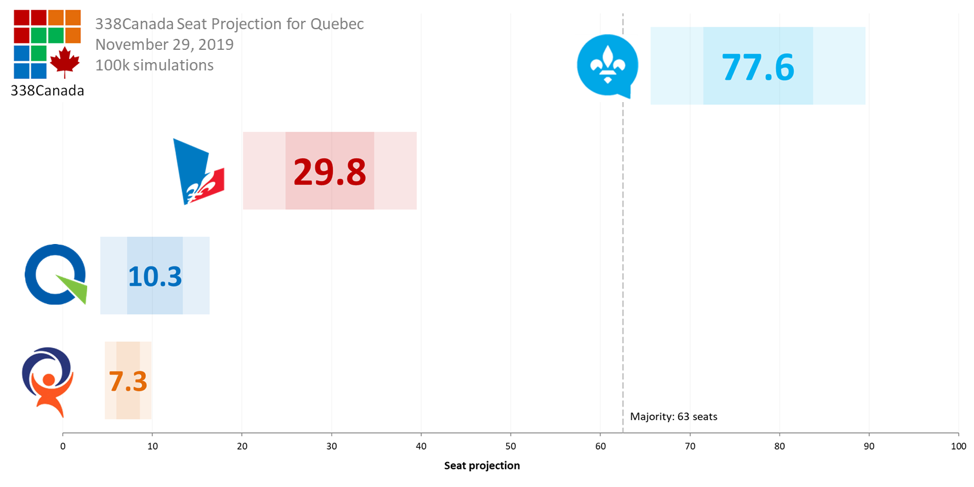 In 100,000 general election simulations performed by the 338Canada model, the CAQ wins an average of 78 seats, 15 more than needed for a majority at the 125-seat Quebec National Assembly and almost 50 seats more than its closest rival, the QLP. The Parti Québécois and left-wing Quebec Solidaire win on average fewer than 20 seats combined.

Moreover, in a recent poll of the Quebec City Jean-Talon electoral district—where a by-election will be held this Monday, Dec. 2—the CAQ candidate held a 10-point lead over its Liberal rival. While this may seem unremarkable at first glance, consider the following: Jean-Talon has been the most faithful Liberal district in Quebec for more than a half-century. The Quebec Liberal Party has won 18 consecutive elections (!!) in Jean-Talon, spanning from 1966 to 2018. Should the poll be accurate and the CAQ win Jean-Talon on Monday night, the CAQ would increase its caucus to 76 MNAs and the QLP would no longer have any elected representation east of Montreal—and be shut out of the Quebec City region for the first time since Confederation.

For all the quarrel between provincial premiers in the past months on hot topics such as equalization, pipelines and Bill 21 (not to mention Brian Pallister’s much publicized ads in Le Devoir trying to woo Quebec minorities to Manitoba), François Legault does not appear to have lost any significant support in Quebec since his premiership began. While both the QLP and the PQ will elect new leaders in 2020, they will most likely remain in rebuilding mode for some time, hence it could take years before those two parties become competitive again. For the QLP, the challenge will be to reach outside its Montreal core and reconnect to the francophone majority; for the Parti Québécois, its main task will certainly be to convince a new generation of Quebecers that independence from Canada is still the best option for the future of the Quebec nation.

On both fronts, recent data indicates that those will be steep hills to climb.

Yes, sometimes life can come at you fast in politics (especially in volatile Quebec), but with its main opposition in shambles, François Legault’s CAQ could potentially dominate Quebec politics for years to come.