The federal budget is a mixed bag

Politics Insider for Apr. 8: the Liberal's plans, unpacked; the Liberal-NDP deal bears fruit; behind the scenes of the Bay du Nord oil megaproject 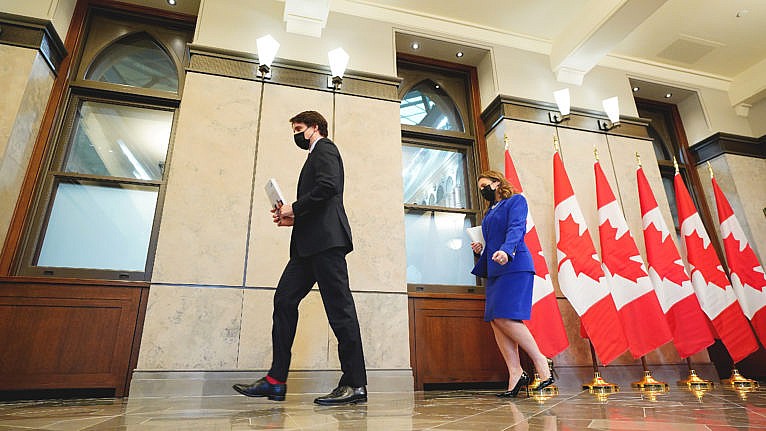 Chrystia Freeland and Justin Trudeau leave a press conference before the release of the federal budget, in Ottawa, April 7, 2022. (Sean Kilpatrick/The Canadian Press)

Chrystia Freeland unveiled tens of billions in new spending over the next five years, aimed at “targeted” initiatives to build the economy, while continuing to chip away at the deficit, CTV reports.

From addressing housing affordability, to shoring up the Canadian military in the face of global instability due to Russia’s war in Ukraine, and making good on progressive policy commitments helping to keep them in power, Thursday’s federal budget from Deputy Prime Minister and Finance Minister Chrystia Freeland outlines how the federal Liberals propose to steer the Canadian economy through persistent inflation, while moving away from pandemic-era massive stimulus spending. The budget proposes $9.5 billion in new spending for the 2022-23 fiscal year—with the biggest ticket items focused on housing supply, Indigenous reconciliation, addressing climate change, and national defence—while also set to take in more than $2 billion in revenue-generating efforts.

Less debt: The Globe’s lead budget story notes there are “some bank CEOs expressing concern with the government’s economic and fiscal track,” but the debt level should decline.

Thursday’s budget shows the federal debt-to-GDP ratio is projected to decline to 41.5 per cent by 2026-27, down from 45.1 per cent this year. That is a faster rate of decline than had been projected in December or in the government’s 2021 budget. The ratio was just over 30 per cent prior to the COVID-19 pandemic.

“We are absolutely determined that our debt to GDP ratio must continue to decline,” Ms. Freeland told the House of Commons on Thursday. “The extraordinary debts we incurred to keep Canadians safe and solvent must be paid down.”

Ms. Freeland acknowledged what Canada’s business leaders have been warning about for years that the country’s economic productivity is lagging far behind the rest of the industrialized world. “So now is the time to focus – with smart investments and a clarity of purpose on growing our economy.”

A prayer: The Globe’s Patrick Brethour  has a column complaining that Freeland has failed to do anything serious about flagging growth.

The government even gives a nod to a recent report from the Organization of Economic Co-operation and Development that places Canada dead last in potential economic growth through to 2060. And Ms. Freeland framed the issue well, saying that it comes down to ensuring that the next generation of Canadians “have more prosperous lives than we do.” It’s just that the government is not proposing any policy shake-up that would alter the projection of Canada’s last-place standing in that critical economic race.

Green growth? The Globe also has a story on the Liberals’ plans for economic growth from green energy, “banking on Canada’s transition to a low-carbon economy as a key driver of economic growth, looking to a suite of tax credits and a new $15-billion investment fund.”

Tooth fix: The Liberals have promised to launch a dental care coverage plan for Canadian families with kids under the age of 12 before the end of the year – if their income is less than $70,000 annually, Global reports. The budget provides $5.3 billion over five years.

Dental care will then be rolled out to those under the age of 18, seniors and people living with a disability in 2023. Then, by 2025, it’ll be fully implemented – though anyone in a household with income over $90,000 annually won’t have access to the proposed program.

NDP items: The dental plan was part of the Liberal-NDP non-coalition. The price of that deal amounts to about $15 billion, according to the Post. That includes about about $6 billion on housing initiatives.

Prudent: In spite of that, John Ivison, writing in the Post, thinks the whole thing is more prudent than expected, writing that Freeland “has apparently been spooked by geo-political uncertainties, stampeding inflation and evidence that the future standard of living of Canadians is under threat because of poor economic productivity.”

Not prudent: In the Toronto Sun, Brian Lilley has a column saying Freeland’s claims to be prudent are false.

What’s shocking about this first NDP-Liberal budget is that the big tax boosts aimed at banks and insurance companies are in there but many of the big spending promises are yet to come. Which makes this budget even more of a disaster.

Anxious times: In the Star, Susan Delacourt points out that the Liberal-NDP deal appears to have allowed the government to “shift its gaze from short-term politics to long-term policy ambition.”

“This is therefore the first of four budgets,” Freeland said. “You are not going to see every single thing we have an ambition to do in the first budget. So we are building and this is the first of four chapters. So yes, we will do more things over the next three budgets.”

Housing: CBC has a story on the budget’s plans to tackle sky-high housing costs, including a temporary ban on foreign buyers, a crackdown on speculators, a pledge to double the pace of new home construction and a new tax-sheltered way for Canadians to save up to buy a home.

Not enough: In the Post, Sabrina Maddeaux has a column saying the Liberal housing plan “crushes millennial home-buyer dreams.”

Despite much-hyped strategic leaks on the eve of the budget’s release, the Liberals’ approach to housing remains relatively unchanged: preserve the gains made by older generations, don’t look too closely at speculators and investors, and most certainly don’t touch the profits of “mom and pop” landlords (an investor class that includes Housing Minister Ahmed Hussen, along with a not-insignificant number of other MPs).

Realpolitik: In non-budget news, La Presse reported Thursday that Steven Guilbeault didn’t want to approve le projet pétrolier Bay du Nord, but had to bend to the will of cabinet (translation).

Registry proposed: Conservative Senator Leo Housakos has tabled a bill that would require those acting on behalf of a foreign government or entities related to that government to register, the Globe reports.

Mr. Housakos said he believes that under such a law, former Quebec premier Jean Charest would have been required to register for his work with the Chinese tech giant Huawei. It’s the second effort in Canada to create a registry that is similar to ones set up in the United States and Australia. Britain last year also launched consultations on enacting a registry. A House of Commons bill by former Conservative MP Kenny Chiu died on the order paper when Parliament was dissolved for the 2021 election campaign.

Still mysterious: The Globe has an interesting story looking at an enduring mystery: Why did Ottawa drop its appeal of Catholic Church payouts for residential school survivors?

Where’s the money? CBC has a story with some answers, and many outstanding questions, about what has happened to all the money raised for the “Freedom Convoy.”