The first Ontario debate: Wynne, Ford and Horwath are all smiles—for now

Paul Wells: Soon enough the forced bonhomie will fade, but the CityNews debate was no one's last chance 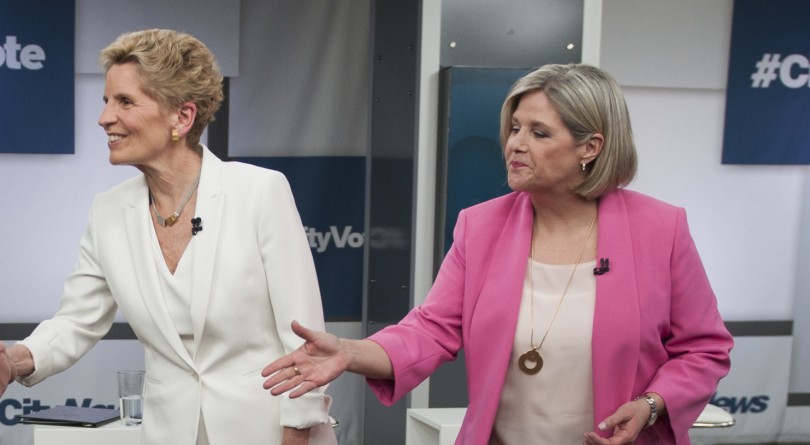 (L-R) Doug Ford, leader of the Progressive Conservative Party of Ontario, Kathleen Wynne, leader of the Ontario Liberal Party and Andrea Horwath, leader of the Ontario New Democratic Party shake hands at the end of the CityNews first televised debate ahead of this year's Ontario provincial election held at City studios on May 7, 2018 in Toronto. (Photograph by Marta Iwanek for Maclean's)

“Kathleen, you’ve got a nice smile on your face there,” Doug Ford told Kathleen Wynne.

“So do you,” she replied, overlooking a faux pas that was widely picked up on Twitter: men are increasingly discouraged from trying to get women to smile, as it’s none of our damned business. She was also erring on the generous side: the Conservative leader’s smile was a determined rictus of defensive good humour, plainly the product of coaching from advisors who were set on ensuring their man avoid any signs of meanness. I’ve seen Ford smile often enough to know he is as capable of the feat as most people, but this particular—smile-ish thing, let’s call it—was something he climbed into, laboriously, each time one of his opponents turned toward him, the way Jeremy Renner climbed into full-body armour before heading out to snip detonator wires in The Hurt Locker.

But that’s only by way of saying Ford was doing a more obvious version of what the other leaders did: putting his best face forward. In the wake of some personal experience with an early debate in the 2015 federal election, I’ve come to notice that early debates in general have their own dynamic: they’re introductory, general, weighted down neither with detail nor with the rancour that becomes inevitable as voting day approaches and leaders start to realize they’re getting perilously close to their last chance. Monday’s debate wasn’t anyone’s last chance, and the three leading candidates for the job of premier were correspondingly cheerful. And at the risk of getting kicked out of the cranky pundits’ guild, they were all quite appealing.

“Andrea, that all sounds great,” Wynne, the incumbent premier and Liberal leader, told her NDP opponent Andrea Horwath after Horwath listed some new program she had in mind.

“It is great!” Horwath corrected her. And they all laughed. Because it’s great to do great things.

READ: Where the parties stand on everything from hydro bills to taxes to transit

She showed some panache. I’ve seen Horwath twice in recent months, at February’s federal NDP convention in Ottawa and on provincial budget day in March near Queen’s Park, and she did not have much to say that was memorable. But in the debate she seemed confident, cheerful, concise in her criticisms of Ford and Wynne, not gratuitous in her digs at either.

What she didn’t do, often enough, was drive home the message that voting NDP would offer a welcome change from Liberal-Conservative feuding and, at least from the NDP’s perspective, serial disappointment. She did try it once, early on. “You’re all for the backroom deals,” Ford told Wynne. “No, that was you and the Greenbelt in the backroom,” she responded. It was a reference to reports last week that Ford had promised real-estate developers he’d open up the protected green zones around Toronto. Ford replied that it’s Wynne who has all the “developer pals.” (Ford is a master of the populist art of promising economic development while expressing shock at the notion that anyone would get along with developers.)

Horwath saw her chance. “You don’t have to choose between his insiders and her insiders!” she said gamely. But she couldn’t cut through the sound of the other two quarreling. She didn’t seem too worried about it: early-debate syndrome. There’ll be plenty of time to drive that message later.

Horwath did make more of an impression when she asked why Ford doesn’t have the “guts” to say what, specifically, he will cut. And indeed he doesn’t. More than that: On just about every file, Ford offered either more spending or more “resources” or more “help” or more “support.” He even announced $5 billion in new transit spending for Toronto and the surrounding region, “over and above” all other budget allocations from every level of government. When his opponents asked how he could reconcile that with his promise of a leaner government, he was indignant. He will “help” and “support;” they’ll “spend.” He won’t “cut”—”it’s not part of my vocabulary”—he’ll simply find “efficiencies and savings.”

This is ludicrous claptrap. There is no “line-by-line cost-benefit analysis,” to quote one of Ford’s favourite fantasy animals, that can permit a government to spend more on doctors, nurses, teachers, transit workers, transit infrastructure and everything else, while shrinking the total size of government. Ford’s hairpin turns on this terrain were consistently hilarious. “I will be there to help you. I will be there to support you,” Ford told families dealing with autism. Wynne asked how he would do that while cutting spending. “You come from the school of tax, tax, tax, spend, spend, spend,” Ford said. The two sentences were perhaps 20 seconds apart.

I’m not sure promising to reconcile the irreconcilable is bad strategy, if you can stomach the contradictions. The primeval first Liberal in the current line of succession, Dalton McGuinty, happily signed the Canadian Taxpayers Federation pledge that he wouldn’t increase taxes, while promising to spend more on everything. Then he just as cheerfully broke that pledge, and here we all are 14 years later. Most days I think promising butter and money for butter is the only way anyone ever wins an election.

Soon enough the forced bonhomie will fade. The three leaders will meet again as early as Friday, in Parry Sound, for a debate on the issues facing northern-ish Ontario. And again later. Soon enough one of them will skip the smiles and attempt to physically decapitate at least one opponent. Welcome to Campaign 2018.

MORE ABOUT THE ONTARIO ELECTION: