A former NRA man on his conversion to gun control

Former competitive shooter and anti-gun activist Tom Diaz on school murders, political indifference and how the NRA is a paper tiger 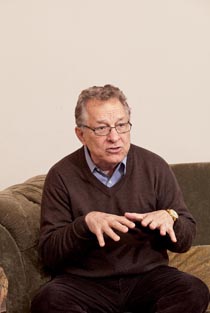 This article was originally published in April, 2013, after the Newton, Conn., school shooting

Tom Diaz, 72, is one of the most prominent gun control advocates in the United States. A former senior policy analyst at Washington’s Violence Policy Center—which considers firearms violence to be a public health issue rather than criminal issue—Diaz wrote Making a Killing: The Business of Guns in America in 1999. It explored the links between political lobbying by the National Rifle Association (NRA) and gun manufacturers. Last year, dismayed by a decade of increasing gun violence and what he considers political indifference to it, Diaz wrote—before the Newtown, Conn., school murders—The Last Gun: How Changes in the Gun Industry are Killing Americans and What It Will Take to Stop It.

Q: You were an NRA man years ago, someone who grew up with guns and was comfortable around them. What changed your thinking?

A: I ended up on the staff of the U.S. House of Representatives Committee on Crime and Criminal Justice, and I was the only staffer, literally, on that committee who knew anything at all about guns, so they said, “Okay, now you’re going to do the gun legislation.” And a couple of things then snapped me out of my comfortable gun world, especially a hearing about the impact of firearms on children. I interviewed kids and it shocked me what 10-, 11-, 12-year-old kids were talking about—one had actually seen her best friend shot down in the street. And, you know, we thought it was bad then, but it was really only the beginning of the trend in the U.S. The kids’ testimony rolled me back; I thought, “This is not the gun world I grew up in. This isn’t target shooting. It’s not even hunting, it’s just killing machines.” And so, like Saul on the way to Damascus, I suddenly became a convert to gun control.

Q: Has Newtown affected everything, from the political moment to the politicians’ courage?

A: We’ve yet to see how it will play out, but I think we are potentially at the tipping moment. Newtown had an enormous, enormous impact, a gut impact. Yes, we’ve had shootings at schools before but this . . . First grade you just have to regard as a safe haven. I can’t tell you how many people I’ve talked to who tell me this has changed everything. I also know specific organizations and philanthropists and foundations that I’m not going to name, but I know from intimate conversations who have said now is the time to push this thing. We need to organize—there’ve been a lot of studies, we don’t need more—the focus now is to get the grassroots going.

Q: More political will, you mean?

A: Yes, grassroots pressure to match the NRA. The secret to the NRA is not its wealth; it does give millions to candidates, but averaged out over an election, as one analyst calculated, it’s about enough to keep volunteers in donuts. The NRA’s secret is that they are organized in every congressional district. They can push a button in Washington and somebody in you-name-the-place-in-America will get their talking points and will call a member of Congress or send an email or appear at an office. It’s a very effective political machine, particularly if you have no response from the other side, which is unfortunately the situation we’re typically in. So what I think will be the ultimate impact of Newtown is another voice, people saying, “Enough of the NRA. We want a different system.”

A: When you use the word, I think you’re absolutely right. I watched that press conference and heard people say, “Oh, my God, that’s so shocking,” about the proposal to turn schools into armed camps. My reaction was, this is the same thing, the same rhetoric, the same incendiary talk about guns that the NRA has always used. But now the American people could suddenly realize, “This is not a sporting organization, this is a madhouse.” I think it changed their views, and I personally believe that the NRA is going to come out of this debate very diminished. There are already conservative voices saying that they’re tired of being bullied by the NRA, and they’re tired of this madness.

Q: Newtown may be a tipping point, but for years you’ve been trying to move this debate from the killing sprees and other headline material to the everyday and virtually unnoticed slaughter in the U.S.

A: Exactly. I tell people if we stopped every mass shooting tomorrow, we’d still have a horrendous record of firearm death and injury that no other advanced nation would allow. In the last 20 years we’ve seen this turning of the civilian market into a military bazaar. Take an Occam’s razor approach: if you dump millions of military firearms, assault rifles and high-capacity semi-automatic pistols into a given country, won’t its people, now that they have access, start using them? Newtown is the natural and probable consequence of this marketing. What’s frustrating is that information about firearms violence has been very skilfully suppressed by the gun industry and the NRA. When I say suppressed I mean they’ve prevented, by law, the Bureau of Alcohol, Tobacco, Firearms and Explosives from releasing data that used to be routinely released, such as rates of crime with specific guns by make and model. So 20 years ago we could have asked, “Well, how many crimes have been committed with Bushmaster rifles?” and the ATF could have developed that from their data. Today we cannot get that information. The news media run to these mass shootings but ignore the everyday shootings in their own communities.

Q: The weekly toll, an average of 582 deaths, is staggering. You write that gun fatalities already surpass auto fatalities in 10 states, and that may soon be true nationwide.

A: The trend is definitely that. We continue to make motor vehicles and the environment in which they’re operated safer, and we continue to educate people about how to do it safely, but we do none of that with firearms. On the contrary, we pass nutty laws like the one in Florida where pediatricians were not allowed to ask about guns in [patient] interviews, which is a standard kind of question that people responsible for children’s health ask. They ask because—wholly aside from the children finding guns and killing themselves or each other—there’s the fact that bringing a gun into the home increases as much as three times the likelihood that somebody in that home is going to be shot, not by some stranger breaking in through the window, but by that gun.

Q: One reason the gun and auto fatality rates have not yet intersected is improvements in trauma care—firearms deaths have been flat, at about 30,000 a year, even as the number of shootings has risen.

A: We’ve managed to suppress the death rate, even as the average toll of shooting victims has risen from 65,000 to 75,000. That’s not all good news—the way it is in the movies when wounded people just walk away—because typical gunshot injuries bring lifelong disabilities. Very often there are spinal injuries, injuries to the head like congresswoman Giffords, or major organs disrupted. And psychological trauma. But there’s a certain point, which the medical experts fear is coming, when the increased militarization of guns will send the death rate back up.

Q: Although gun-rights spokespeople talk of protection, whether from criminals or a tyrannical government, half the deaths are suicides or murder-suicides. You cast a new light on the sensitive debate over military suicide rates.

A: There were 3,800 active duty deaths and 1,500 suicides in the U.S. armed forces between 2001 and 2008, half of them by privately owned weapons. People talk about the stress of the wars and PTSD, but not about how the NRA silently slipped into legislation that the Defense Department can’t keep any records of private firearms [kept by military personnel] and can’t ask personnel about them. Whether it’s the commander or the base psychiatrist concerned about a specific person, they can’t ask them, “Do you have a gun at home? Don’t you think we should bring it in?” And you can’t even imagine a situation in our military where you’d say, “This is the army, we got all the guns we need here, so you aren’t allowed your own gun.”

Q: We frequently hear that Americans accept the guns, the price of freedom and all that, and that’s why gun control has been a failure, but you do not think that’s true?

A: No, no, no, no. I don’t accept that at all. The gun culture is really shrinking dramatically in America, and that’s only going to accelerate: young people are just not into it, it’s an old white guy thing, frankly. People of different ethnicities and races, who are defining the American political scene, they’re not into guns, and this is going to change the political dynamic. The future is going to be a huge wake-up call for so-called progressive politicians who really have just done the minimum they can. Only about a fifth of the population owns guns—there are more around because the people who do have more than they used to, an average of six. Hunting is declining, and all that sells now are the assault rifles and the new small handguns to fit with the concealed-carry permits—those sales are why the gun lobby pushed for those laws. But the marketing to women, the pink guns and last year’s First National Take Your Daughters to the Range Day, is not working. Gun sales to women are flat. The NRA, the gun lobby, is a paper tiger.