Canada's military charm offensive south of the border is spearheaded by one Newfoundlander, a full battery and a love of poetry 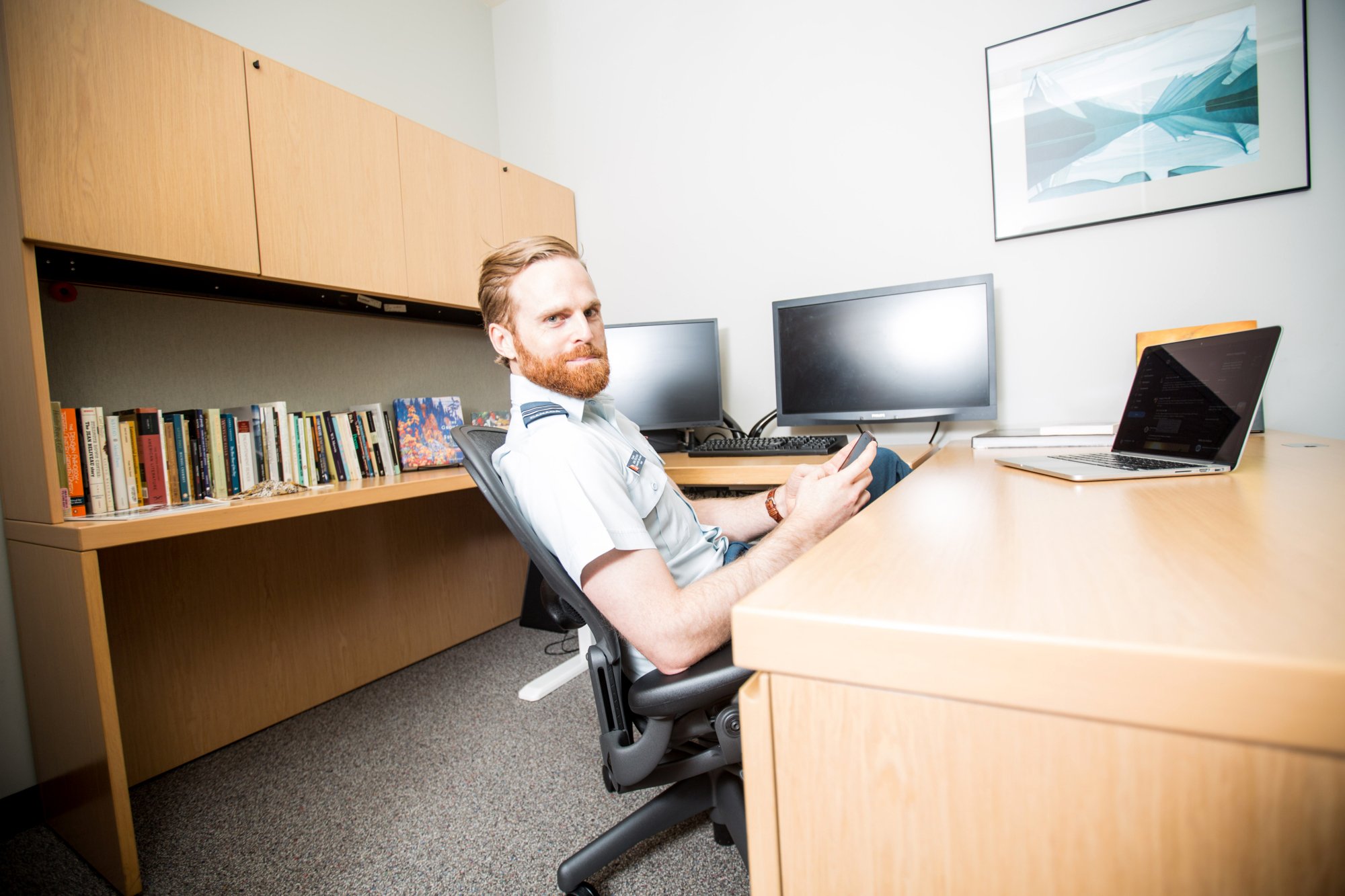 It seems to take a village of bureaucrats to make a social media message humorous or timely: one Transport Canada tweet issued to celebrate the unofficial Star Wars day of May 4 was five months in the planning, which included being “approved as being factual and funny.”

Then there is the @CAFinUS (Canadian Armed Forces working in the United States) Twitter account. The missives run the gamut from pithy requests—“Sundays with masks > No more Sundays”—to long threads focusing on BIPOC troops who “fought to fight for a country that thought they were less than equal,” to expressing a fondness for Hawaiian pizza (invented in Chatham, Ont.). Often, its words are poetic: “It’s from the quiet men at supper tables / It’s from the women in shawls at monuments / It’s from us.” This tweet appeared ahead of Remembrance Day in November 2019.

“It is genius. I love it,” says Stephanie Carvin, an associate professor of international relations at Carleton University who researches national and international security. She’s been a follower for a while. “I thought, ‘There is no way this is a real thing,’ and then it got verified [with Twitter’s check mark of authenticity] and I was like, “Holy cow, it’s real!’ ”

The person behind the account has been reluctant to identify himself until now. “I don’t want them to see me. I want them to see the Canadian Armed Forces,” explains Capt. Kirk Sullivan, 38, a public affairs officer (PAO) at the Canadian embassy in Washington. While Sullivan is the account’s sole tweeter, he emphasizes that it doesn’t reflect his opinions. (He won’t even say if he personally likes pineapple and ham on his pizza.) For Sullivan, the account’s focus is simple: “Letting people know that we’re here,” he says. “Obviously comingled with that is waving the flag representing Canada.”

What is undoubtedly Sullivan is @CAFinUS’s voice. The cadence of his tweets hearkens back to his upbringing in Calvert, N.L.—“I grew up in a very small town where folk songs were part of everyday life”—as well as his love of poetry. His untraditional career path also helps. He spent six years as a Royal Canadian Navy marine engineer “getting seasick on a few different ships” before earning an English literature degree at the Royal Military College in Kingston, Ont., in 2012, and then shifting to work as a PAO—first in Ottawa and now in Washington, where he has just completed a master’s degree in journalism at Georgetown University.

After Sullivan arrived in the U.S. capital in July 2018, he and his boss decided to make over the military Twitter account that had been going since 2010. The name was changed (it used to be @CDNally) and its bland government fare was replaced by a friendly, folksy persona, the ultimate polite Canadian neighbour. Sullivan’s tweets are often typed on his phone, at any hour of the day—“It’s pervasive, it’s always, it’s unending”—and he interacts extensively with those who react to his posts. “Battery life is crucial,” he says. In the last two years, @CAFinUS has gone from fewer than 600 followers with 8,500 impressions a month to more than 35,000 followers with an average of 10 million monthly impressions.

Sullivan often tells personal stories because “that’s what’s going to resonate with people.” It could be the story of Lanier Phillips, a Black U.S. Navy sailor who was scared to leave his ship when it ran aground off Newfoundland in 1942 because his shipmates said he’d be lynched if he went ashore. There are poignant remembrances of lives lost, usually troops and veterans, including the many who have died of COVID-19. Sullivan receives direct messages from family members expressing their appreciation for the tweets: “There’s nothing that I could endeavour to achieve with a social media account that could be more than that; that [it] could matter to someone who is grieving the loss of their loved one,” he says.

In late November 2019, as Sullivan was walking into the embassy, he jotted off a tweet asking followers to write to troops who would be away from their families during the upcoming holidays. This spawned a letter-writing campaign that saw 400,000 letters flood the processing centre at CFB Trenton. “I heard from friends of friends, something to the effect of ‘Can you please tell him to stop?’ ” Sullivan recounts with a laugh.

The account doesn’t shy away from current events.“It takes a point of view on some of the issues that are so important right now, like Black Lives Matter,” writes Scott Simmie, a communications specialist, in an email. “Government historically would not take a position on something like this unless it had gone through 47 committees. The honesty and spontaneity really impresses me.” In June, Sullivan tweeted: “Do / not / think it’s over . . . do / not / think it’s someone else’s problem / Racism is our problem / They are Us.” When a woman responded, saying: “Systemic racism is a myth,” he wrote: “Dear Katherine: We hope all is well with you and yours during these uncertain and trying times. Please know that racism is very real. Please know that it’s unacceptable . . . Please understand that it hurts us, Yours, @CAFinUS.” Sullivan doesn’t need approval for his tweets (“It’s more an approval of an approach,” he says), noting that the account does not make announcements but rather echoes existing military policy, reflects the CAF’s code of ethics and takes its cues from statements already made by leadership.

“He is the most Canadian Canadian,” says Richard Lachman, an associate professor of digital media at Ryerson University. “He is using the stereotypes of us in the most positive way.” The surfaceness of Twitter, says Lachman, with its 280-character limit, means the account can avoid getting into deep, critical debates about problems in Canada and the CAF, such as inclusion or gender policy: “The most generous [characterization] would be [to say that] it’s doing bridge-building and awareness-raising; the least generous would be [to say] it is propaganda, it’s able to say, ‘Canada is here, rah rah rah, the Forces are great, remember the troops.’ ”

For Carvin, the security expert, the account is important because it “is trying to engage the American people with a view to reminding them that they have allies, and these allies care about America.” She also likes the way it engages with, in her words, “schmucks like me.” When a cybersecurity analyst said that being followed by @CAFinUS “feels like when your mom starts following you on Instagram,” the account quipped, “Just clean up your room, okay.”

This article appears in print in the October 2020 issue of Maclean’s magazine with the headline, “A folksy charm offensive.” Subscribe to the monthly print magazine here.