The Leap Manifesto and when celebrities politic - Macleans.ca 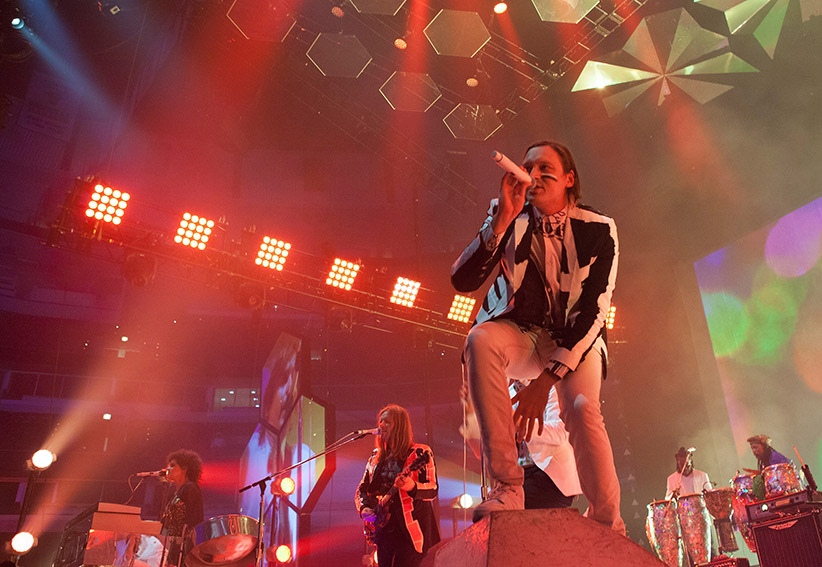 A gentleman from Entertainment Tonight wanted to understand the purpose of celebrity. “Why,” he asked, “do you think celebrity influencers can initiate change for this cause?”

This was a relatively meta moment—the gentleman’s presence was an answer to his question, insofar as one might assume that a gentleman from Entertainment Tonight would probably not have been at this particular news conference were it not for the involvement of celebrities. But maybe he just wanted to have someone explain that out loud.

“Well, obviously, its an entry point into people who pay a lot of attention to celebrities,” explained David Suzuki, the environmentalist (and a celebrity in his own right). “It offers an opportunity to share a few ideas they might not otherwise have had.”

The occasion for this explanation was the “Leap Manifesto“, a call to national policy change signed by some known political figures, but also by entertainers such as Alanis Morissette, the Arcade Fire, Donald Sutherland, Ellen Page, Gord Downie, Leonard Cohen, Leslie Feist, Rachel McAdams, Tegan & Sara, Sarah Harmer and Sarah Polley. Also: Vag Halen, a wonderfully named “feminist art rock band” from Toronto. The manifesto was unveiled at a news conference in downtown Toronto, not far from the proceedings of the Toronto International Film Festival.

Suzuki recalled Bo Derek’s involvement in a campaign against the aerial shooting of wolves in British Columbia in the 1980s (a successful campaign that might need to be revived now).

“Now, it can backfire, if in fact celebrities act as if they know everything there is,” Suzuki continued.

Here he recalled Heather Mills’ unfortunate attempt to debate Danny Williams on the particulars of the seal hunt.

“But I think what they do is they offer their ability to attract press to let people like Naomi talk to the wide world,” Suzuki concluded, referencing Naomi Klein, this event’s central organizer. “And I think there’s nothing wrong with that.”

The manifesto itself is equal parts dramatic and not. The tone can be rather urgent (“We start from the premise that Canada is facing the deepest crisis in recent memory”) and the ideals rather … idealistic. There is a certain sense of nationalization. It would seem to leave little room for any further development of non-renewable energy sources: applying a Not In My Backyard standard to “oil and gas pipelines; fracking in New Brunswick, Quebec and British Columbia; increased tanker traffic off our coasts; and to Canadian-owned mining projects the world over.” And there is a vague argument against international trade: “We call for an end to all trade deals that interfere with our attempts to rebuild local economies, regulate corporations and stop damaging extractive projects.” The desire to increase resource royalties would seem to conflict with the desire to stop developing resources.

Various other holes might be poked, but many of the concerns are probably widely held. Likely almost all progressive politicians, and many conservatives, would have their government concern itself with the environment, Aboriginal welfare, equality, child care and public infrastructure.

Many of the specifics are basically within the realm of acceptable thought. The manifesto’s authors would eliminate subsidies for fossil fuel production, something G20 leaders committed to do in the “medium term” in 2009. The undersigned suggest Canada could have an entirely clean economy by 2050, while Stephen Harper has promised that Canada will be off fossil fuels by 2100. Cracking down on tax evasion is also something the Conservative government has expressed an interest in. A serious cut in military spending might be controversial, but raising taxes on the wealthy is currently a Liberal proposal, while raising taxes on corporations is an NDP promise. A financial transaction tax is popular in Europe and has been a proposal of the Greens. The manifesto speaks ill of “austerity”, which basically lines up with Justin Trudeau’s position. Repealing income-splitting and establishing a price on carbon are principles of the New Democrat, Liberal and Green platforms. A basic income was a favourite idea of former Conservative senator Hugh Segal.

The early read on the manifesto was that it might complicate life for the NDP, seeing how it was signed by Stephen Lewis, the prominent New Democrat, and advocates for measures Tom Mulcair does not support. Conservative loyalists quickly seemed eager to make this manifesto a problem for the NDP (presumably as a reflection of progressive wackiness) and it’s also possible there will be some pressure from within and without on the NDP to be more bold in its policies. But it’s equally possible that in not going along with all of these ideas the NDP will just end up seeming more reasonable.

That celebrities are involved—”celebrities” defined here as the sort of people you might expect to see on Entertainment Tonight—complicates matters insofar as we have a complicated relationship with the idea of celebrities as political actors. If the Arcade Fire had made a “political record” or Ellen Page had made a movie about a politician, they could expect to be received differently than they might be for signing their name to a policy manifesto. We make certain allowances for art and don’t immediately demand that it be followed by a comprehensive and costed plan for addressing the problems a song or film identifies.

There is a certain presumption to a celebrity’s declaration of a political opinion, as if their opinion should matter somehow. But we’ve already decided that they matter somehow. And so why shouldn’t they use the platforms we provide them to advocate for ideas or causes?

In a possibly apocryphal tale, Michael Jordan is said to have remarked that “Republicans buy sneakers too” to explain why he did not endorse a Democratic candidate in the 1990s. That could fairly be regarded as selfishly refusing to use one’s platform to advance a worthy cause. And even if Rachel McAdams has little to nothing to lose commercially from signing the Leap Manifesto, her involvement still seems more admirable than the inverse: refusing to use the public attention you receive to try to accomplish anything beyond selling movie tickets or cosmetics or magazines.

“If celebrities can bring some of their spotlight and shed it on these kids in need, that can be very powerful,” Nicholas Kristof, the New York Times columnist, explained of a documentary series he produced that used celebrities to highlight certain problems. “We hope people will pay attention and be drawn in due to their presence.”

“Meeting celebrities isn’t my shtick,” Stephen Harper once said in not bothering to meet with Bono. But seven years later, with Bono in Ottawa, he took a meeting. Probably both Bono and the Prime Minister saw some benefit in being seen to have that chat.

Of course, the specifics matters. And, of course, any celebrity who attempts to dabble in public policy should be held accountable for any over-simplified declarations on the topic at hand. But it would seem overly serious to deny them a sincere interest in something, if that is what they possess, or to dismiss any willingness to engage with the world. In this case, the finer points of this manifesto might be challenging to defend against tough scrutiny. But the average celebrity might be hard-pressed to trivialize politics any more or any worse than the average politician does on any given day.

“We live in a historic moment,” Naomi Klein explained this morning. “One that demands audacity, ambition, courage and since, unfortunately, many of our leaders are too busy watching the polls to grasp either the urgency or the incredible potential of this transformation, leadership is coming from outside electoral politics.”

There will always be something to be said for agitators. And, while we’re considering our options, are we entirely sure we wouldn’t be better off with Prime Minister Leonard Cohen and co-finance ministers Tegan & Sara?