Paul Wells: With only nine days until the Ontario election, the NDP are continuing to expand their lead over the PCs and Liberals. 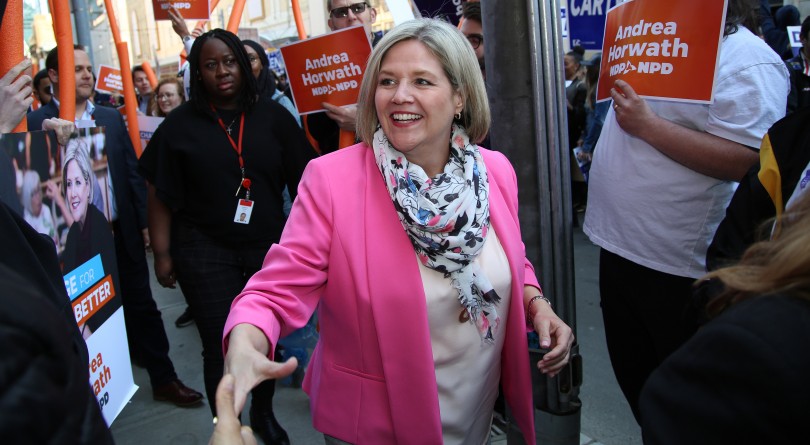 TORONTO, ON-Toronto-Debate Supporters. NDP Leader Andrea Horwath arrives at the debates while supporters of all parties wait for their leaders in front of City TV in Toronto at Yonge and Dundas (Rene Johnston/Toronto Star via Getty Images)

A new online poll shows the NDP’s lead continuing to grow at the expense of both the Liberals and, increasingly, of the Progressive Conservatives.

With only nine days until the June 7 election, the poll by Pollara Strategic Insights gives Andrea Horwath’s NDP 43 per cent of the decided vote, up five points from the last such poll published here six days ago. Doug Ford’s Progressive Conservatives are at 32 per cent, down five points. Kathleen Wynne’s Liberals are at 17 per cent, down a point to a level that would represent a historic low in the Ontario party’s history.

The poll was conducted Sunday and Monday, beginning shortly before Sunday’s televised debate of provincial party leaders. Most respondents completed their surveys after the debate was over. “Momentum has continued to swing the NDP way post-debate, at the expense of the PCs and the Liberals,” Pollara Chief Strategist Don Guy said of his results. “About a quarter of the remaining undecideds have also moved, with the NDP doing well thanks to positive impressions of Andrea Horwath.”

The main trend in voter support over the course of the campaign has been that “vote intentions are aligning almost perfectly with leader positives,” Guy said. At the beginning of the campaign, respondents’ appreciation of Horwath was higher than their intention to vote NDP. Their opinion of Ford and Wynne was lower than their intention to vote PC or Liberal. Since then, voting intention has shifted to match opinions of the leaders. “Very little else is penetrating, including whatever issues are in the news cycles,” Guy said.

READ: See where the parties stand on the issues that matter to you

The Liberals’ collapsing support is, by now, old news, and seems to be continuing despite the strong reviews Premier Wynne won from many observers for her performance in Sunday evening’s televised debate. But this poll suggests it is now getting time for the Progressive Conservatives to start seriously worrying too. At 32 per cent, PC support is now below the average of the popular vote the party won over the last four elections — all of which it lost.

“Ford’s positives have dropped considerably since he peaked in the spring and have continued to drop in the campaign as voters are exposed to him,” Guy said. Since the first Maclean’s-Pollara poll three weeks ago, support for the PCs has declined eight points and for the Liberals six points, while the NDP has gained an extraordinary 13 points.

Pollara conducted a 10-minute online survey of 802 Ontarians who self-identified as eligible to vote in the Ontario Elections on May 27 and 28, 2018. Because the sample is based on those who initially self-selected for participation in the panel rather than a probability sample, no estimates of sampling error can be calculated. All sample surveys and polls may be subject to multiple sources of error, including, but not limited to sampling error, coverage error, and measurement error. A probability sample of equivalent size would have a margin of error of ± 3.3 per cent.

The data are statistically weighted to ensure the regional composition province wide and within region to ensure age and gender composition reflects that of the Ontario adult eligible population using information from the 2016 Census and accounting for older Ontarians’ increased propensity to vote based on an analysis of Ontario’s election performance relative to federal elections. Based on our analysis, the composition of the electorate over the age of 55 would range between 43 and 48 per cent.

In this report, results are expressed as percentages unless otherwise noted. Results may not add to 100 per cent due to rounding or multiple responses. Net results cited in the text may not exactly match individual results shown in the charts due to rounding.