The missing Mounties of the MMIW hearings

The RCMP must play a part in any remedy for wrongs committed against Indigenous women. But not everyone wants them at the inquiry. 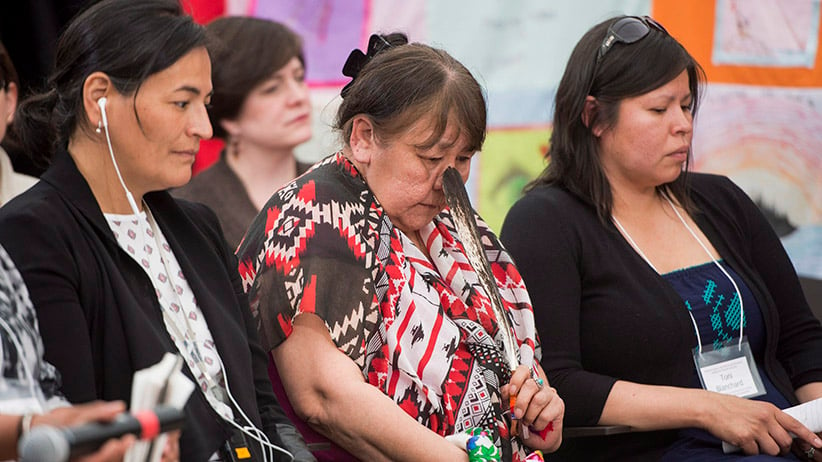 Bella Bresse, centre, pauses for a moment while speaking about her murdered daughter, Evangeline Kris Bresse, at the National Inquiry into Missing and Murdered Indigenous Women and Girls (Jonathan Hayward/CP)

Superintendent Brian Jones is the RCMP officer in charge of criminal operations in Whitehorse, but as families of missing and murdered Indigenous women testified in a tent by the Yukon River, he stuck to his office 11 blocks away. In a basement meeting room of the detachment headquarters, he watched a live-stream of proceedings Wednesday on a television hooked up to a laptop. During the hearings, witnesses blamed officers for negligence, demanded apologies and asked for their help. The RCMP kept coming up, but Jones never came ‘round.

“We’re not trying to avoid accountability or responsibility,” he says, “but it’s just, is it appropriate?” Police are technically welcome on site, and need to be listening, but their presence is sure to offend and intimidate some members of a community accusing them of negligence and assaults. While critics say the National Inquiry into Missing and Murdered Indigenous Women and Girls is useless without Mounties investigating each case, the RCMP’s absence points to an underlying tension—between the need for sensitivity at the inquiry, and the desire for hard results in resolving the violence exposed. The public airing of these stories won’t prompt police to address the violence unless the famlies feel comfortable enough to share them in the first place. As a result, the inquiry’s two-year, $53-million journey down this path may sound, to its most frustrated followers, like pitter-patter on eggshells.

“My focus is my Mama’s bones, and an apology,” says Edna Deerunner, whose mother was murdered by her father, as she says after the hearing. In her testimony, she recalled that, at age five, she peered through the slats of her crib and watched her father beat her mother, who tried reaching for his keys to escape but could not. Deerunner said she needs the RCMP in order to retrieve her mother’s remains, which she suspects lie under a shed in Whitehorse, where she believes her father lit a stove to heat the ground until it was soft enough to dig. “You can’t just barge in on someone’s property,” she says of the suspected crime scene from the mid-1950s, after the hearing. “I think someone in authority has to be there when you’re dealing with bones” (Parks Canada’s advised protocol for discovery of human remains, unless they are suspected to be ancient, is to halt all activity, secure the area and inform the RCMP).

READ MORE: How a relative at MMIW copes

Deerunner also wants an in-person apology from the RCMP—for the treatment of Indigenous people in general, she said, and more specifically, for not opening a file on her mother’s homicide. And while the Mounties are not exclusively a target of anger—some critics have called on Justin Trudeau to give the inquiry’s entire budget to the RCMP and demand they solve cold cases—they can expect more of the same as the inquiry unfolds. Witness after witness in Whitehorse has suggested police must change for anything else to improve, as they played a key role in many of these family disasters.

With the insignia of the Crown on its uniform, the Mounties are certainly a visible part of the “system” in what many describe as systematic mistreatment of Indigenous women. Many First Nations were matriarchal before colonization, when some clan mothers would decide which male would be chief and oust him as seen fit. One of the Mounties’ early missions was to “herd” approximately 150,000 children into residential schools in the early 1900s, according to a 470-page report on RCMP involvement in the schools.

“The justice system isn’t set up for healing,” says Francyne Joe, a spokesperson for the Native Women’s Association of Canada, whose recommendations for the inquiry included examining the conduct of the RCMP and local police forces. Over the decades, say critics, police wrongs toward Indigenous people have included negligence in handling cases, racial profiling and abusing Aboriginal people, sexually or otherwise. “I’m happy in a way they’re not here,” says Starr Drynock, a witness in the Whitehorse hearings who was a baby when her mother was murdered. “Their presence here would prevent people from talking,” adds Drynock’s father, Norman. Instead, he says of the four female commissioners (a fifth is male), “you have a bunch of women sitting across wanting to help. Why not bring it all out?”

Families can testify on camera or in-camera. They can talk with statement takers, and if they’d rather stand than sit, such can be arranged. When witness Dorothy Hayes showed up with bloodshot eyes and a cough after her first night in a hotel, she told a lawyer for the commissioners that she was allergic to pet dander. Hayes says the lawyer called the hotel and discovered she was on a pet-friendly floor. “Oh my God, I’m not pet-friendly,” Hayes recalls telling an inquiry lawyer, who then ensured the cleaners re-vacuumed the room.

READ MORE: The MMIW inquiry comes out in the open—literally

The commissioners haven’t yet done their three-day sensitivity training, but already frame their queries with care, saying things like, “I want to know what’s in your heart and in your mind.” “After Daddy killed Mama,” Deerunner explained in testimony, she was taken to Alaska with her uncle, who she says sold her sister to a couple in Florida who were too old to adopt. One of Deerunner’s brothers was killed in a plane crash; the other jumped to his death off a bridge. The commissioners kept calm during one hearing when a distraught young man named Alex Carlick barged in wearing sunglasses, taking the microphone to say that his mother and sister were taken from him and the police had done nothing.

Security was on site; a company from Halifax won the contact for the hearings. Chebucto Security & Investigations Inc. is owned by an Indigenous man and does security to most powwows in the Maritimes. The five officers at the hearings wore plain clothes—or purple clothes, in the case of the one female guard. Holly Meuse is Mi’kmaq and wore purple lipstick upon a purple jacket, with purple streaks in the hair that hid her earpiece. She says her role is “to fit in, to mingle with everybody, having everybody feel comfortable yet know we’re here.” When one mother of a victim suffered from spiked blood pressure, the guards called the ambulance. If needed, they had an arrangement to bring in the RCMP.

A single Mountie did show up for a one hearing. Cpl. Kayreen Brickner, the official liaison between the detachment in Whitehorse and the inquiry, came to the last hearing of the day on Wednesday, not in uniform, at the request of witness Diane Lilley, who had grown close to her during the investigation into her sister’s death. Lilley spoke for three hours and 45 minutes, with few interruptions, before the commissioners suggested, delicately, she’d best continue with written statements in the morning.