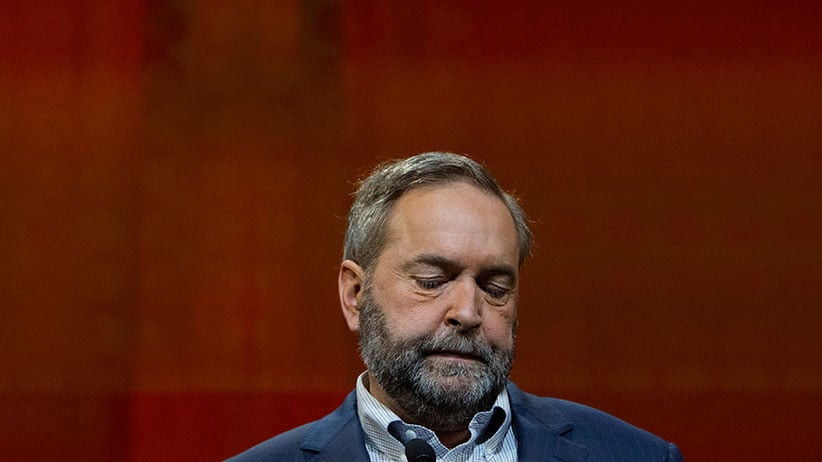 A dead man walking has no authority, only prescience, and as Tom Mulcair delivered his final speech in Edmonton, he saw what was happening to his party as clearly as he saw his own political demise. The NDP had not just taken the leap into a leadership race, but also into a full-blown identity crisis.

To be fair, it wasn’t that hard to see. The contrasting speeches of former Ontario NDP leader Stephen Lewis and Alberta NDP Premier Rachel Notley might as well have spelled out “divorce” in bright orange letters. Or, to be true to the progressive movement lingo, call it a “conscious uncoupling.”

Lewis always speaks as if he brings a portable mountain top to every event. He’s unquestionably Canada’s best orator.  At the convention, his biblical jeremiad managed the dialectical trick of skewering the Trudeau Liberal agenda for doing almost exactly what most NDP members have always dreamed of doing themselves. Still, he went on to urge delegates to support the hard-left-leaning, anti-free trade, anti-fossil-fuel Leap Manifesto, something that just happened to be spearheaded by his son, Avi Lewis, and his daughter-in-law, the writer and superstar activist Naomi Klein. It was an explosive fusion of the Lewis’s establishment Orange Royalty with the credibility of the Klein-led, street-protesting activists. It melted Mulcair.

Notley, however, was having none of it. As she struggles to guide a province through a wicked downturn—a province that has long viewed progressive politics as toxic—Notley practically donned a hazmat suit to protect herself from the radioactive rhetoric of the Leapers. “Those ideas will never form any part of our policy,” she seethed the next day. “They are naive, they are ill-informed and they are tone deaf.”

In her view, watching the Leapers blow into Alberta and declare war on pipelines wasn’t bold policy, merely arrogant insolence. When Karl Bélanger, the stalwart and loyal national director of the NDP, tried half-heartedly to spin me that this was all part of a healthy exchange of ideas, I felt badly for him. It was as if he hadn’t learned anything from what had just doomed Mulcair. The blindness of denial. You can’t keep peeing on your own leg and pretend it’s raining.

How did a party that looked so unified six months ago suddenly split so badly? Election losses do that. Inside the peloton of pundit commentary, the consensus theory is that the Liberals’ crafty tack to the left co-opted the NDP, pushing them into the more radical parts of the socialist spectrum. But riding behind that commentary group is another vaguely conspiratorial theory. This one suggests that Mulcair was never really a true believer in a socialist NDP. The former Thatcher-praising, Liberal cabinet minister was a parvenu—not, well, not pure laine orange.

When I tweeted that the NDP had an identity crisis, a party member snapped back, “Tom Mulcair was our identity crisis,” as if Mulcair had subversively duped the party into abandoning its true beliefs by promising—gasp—balanced budgets. This anti-Mulcair theory conveniently forgets that Jack Layton also promised balanced budgets and dragged the party toward the political centre. The very same people who helped Layton lead the party to its high-water mark—Anne McGrath, Brad Lavigne, Karl Bélanger—also worked with Mulcair. You have to re-read Animal Farm to appreciate how paranoid this revisionism of the Mulcair era really is.

The NDP has to be wary of this kind of ideological nativism, where not only pipelines and climate change become litmus tests for party purity, but so does a member’s political history. Layton grew the party by bringing in former urban, Liberal progressives in Ontario and soft separatists in Quebec. Turning on people like Mulcair for their short socialist lineage will insulate the party from the one thing it must do to survive this period: grow.

As it is now, the NDP leadership race begins with the party riven along east-west lines. The eastern Leapers want the soaring, inspirational ideas that spark revolutionary change. The western progressives, who have the benefit of actually winning power, have come to accept that the dull prose of governing often demands a commitment to politics of incrementalism, even if that means watering down the very ideas that differentiate them from the federal Liberals. Rachel Notley and her crowd don’t need to support another revolution. They just won one.

Still, the need for new ideas and excitement for the NDP and the Conservatives on a federal level has some fearing a desperate leap into dynastic politics. The NDP could turn to Avi Lewis, grandson of their former leader, to lend their party starpower. We’ve already seen a Trudeau on the Rideau Redux, so a Lewis the Third is not impossible. Some Conservatives are also floating the name Carolyn Mulroney as a possible leader. Good God, imagine a Trudeau–Lewis–Mulroney campaign? Our entire political landscape recast as a summer blockbuster sequel.

But let’s not get ahead of ourselves. For now, the Leapers are a point of departure. They are stirring an ideological pot that needs stirring. NDP MPs I have spoken to on background don’t believe the Leapers will co-opt the party, but merely infuse it with aspirational policy ideas. The fossil-fuel goal, for example, will have a long-enough timeline to lose its alienating edge.

Of course, Liberals are the biggest winners here. If Trudeau manages to move Alberta energy to eastern tidewater, he’ll put a pipeline through the heart of the NDP and maybe even the Conservatives. Meanwhile, in the next 15 months, he can pass some his most controversial policies, such as electoral reform, virtually unopposed. The end of Tom Mulcair was the right decision, but it may turn out to be most right for the Liberals, not the NDP.