The next few days in B.C. politics will be strange and fun

B.C. election 2017 was a cliffhanger, leaving us with no idea who will form government. But we know it's going to be different. 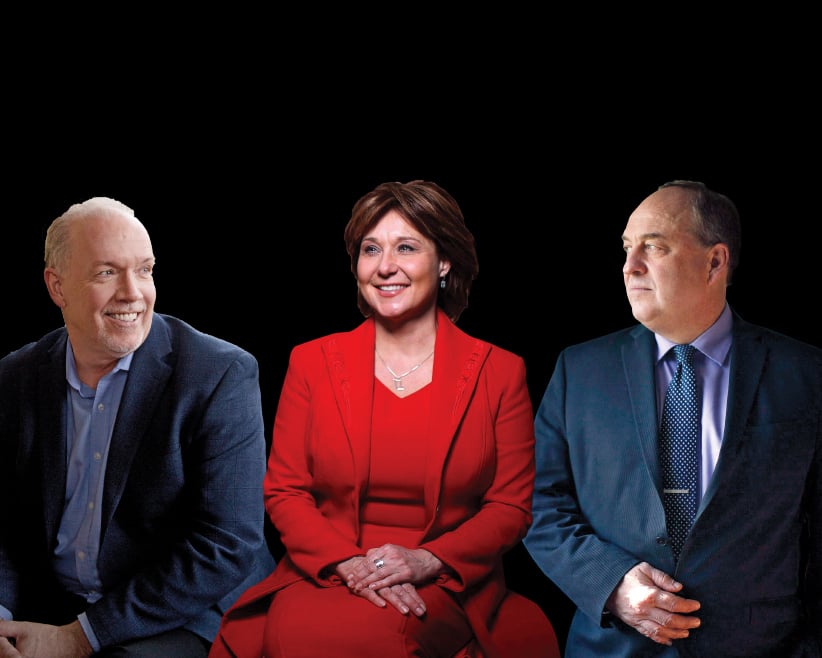 We don’t have much experience staying up late to watch election results roll in here in British Columbia. Federally, elections tend to be decided before we sit down to dinner; provincially, we usually know who the government will be with plenty of time left to get to bed at a decent hour. Not this time. At the time of writing, the seat count had the governing Liberals with 43 seats, the NDP with 41 and the Green Party with three seats (up from one in 2013). While Christy Clark remains the premier for now—that’s how the Westminster system works—and while she’ll get the first crack at forming government, her future and her party’s future is uncertain.

We’ll soon know more about who’ll govern B.C. going forward. For now, there are a few scenarios that could play out. Clark could try to enter into an agreement with the B.C. Greens or rely on support from the NDP in an attempt to navigate a minority government (usually short lived in Canada) through rocky legislative terrain. She could also try to establish a formal coalition government with the Greens (which would likely be more stable than a minority government); this would mean that one or more Green Party members of the legislative assembly (MLAs) of would be given a position in the Cabinet. However, with a recount in Courtenay-Comox (which the NDP won by nine votes—that’s right, nine) in the works, the Liberals could potentially end up with a very slim majority government. The last minority government in B.C. was in 1952—ever so slightly before my time, which is to say, 32 years before I was born.

Of course, those options are just the beginning of the choose-your-own-adventure paths that lay before us in B.C. The NDP top brass will be burning the airwaves between their headquarters and the Green Party base in an attempt to woo Green Party leader Andrew Weaver and his MLAs. An arrangement could be made between the NDP and the Greens that would either let the New Democrats form their own coalition government, or else reach an arrangement to govern as a minority government. Again, as premier, Clark will get the first try. If she’s unable to form a government, however, these options enter into play. Further complicating things is the fact that someone must be elected speaker of the legislature, but let’s set that aside for now. I know—fun with math and the Westminster system.

Andrew Weaver has indicated that Green Party cooperation is contingent on a few key demands being met, including a vote on B.C. adopting proportional representation (which we’ve tried for twice in the past, but now may now attempt once more, with feeling!), reforming political donation rules in the province (essentially, we have nearly none at the moment, yee haw), and, presumably, revisiting the province’s plans to support the liquefied natural gas industry (which Weaver has said is done for). In short, Andrew Weaver and the B.C. Greens, who had one seat in the last legislature, and now have three, is likely going to be the decider when it comes to who will be governing British Columbia for the near future.

Again, all of this will start to be worked out in the hours and perhaps days to come. The good news is that in the meantime, the sun will continue to rise in British Columbia and we’ll manage to avoid the complete collapse of social order and the emergence of a dystopian hellscape. Our institutions are world-class; we’ll be fine, thanks. The state remains stable and we’re not Belgium—which, in 2010-2011, went 541 days with no party able to form a government. The less good news is that with recounts, absentee ballots, and negotiations between the parties, it could be weeks before we know for sure. The recount in Courtenay-Comox will take place between May 22-24, at the same time as absentee ballots will be counted for ridings across the province. There may also be recounts in other ridings, which adds to the province-wide nail biting that characterized last night’s observation of the returns.

In her election night speech, Clark noted that her party had won both the seat count and the popular vote, a fairly clear attempt at shaping a narrative in support of her continued tenure as premier. British Columbians—and, indeed, Canadians—have a visceral sense that the party with the most seats or the most votes should govern. However, in our Westminster system, that isn’t necessary true. The party or group of parties who can command the confidence of the legislature gets to govern (that’s how responsible government works). Again, that could end up being the Liberals, but it could also be the NDP.

Whatever happens, the 2017 election was a study in polarization—the popular support of the two major parties was split with 41 per cent going to the Liberals and 40 per cent to the NDP, with the latter enjoying broad urban support and the former picking up rural votes. The Liberals, who have been in government for 16 years, enjoyed a few advantages, including twice as much money as the NDP managed to net, a provincial economy that has been growing steadily (though not equitably), an efficient distribution of support (their likely voters were in the right ridings to assist a Liberal win), a divided left (with the Greens growing their share of support), and a status quo bias that often results in folks sticking with what they know.

The Liberals ran a “don’t-change-a-horse-in-midstream” campaign that focused on highlighting economic growth, offering little by way of new policy, and warning that the NDP would undo the progress B.C. has made in the last 16 years. The NDP used its campaign to argue that while the province is wealthy, it’s also unaffordable, and they accused the Liberals of being in the pocket of special interests and the corporate elite. The Greens for their part threw up their hands and said “A pox on all your houses.” Weaver offered an “Aw shucks, I’m no politician” narrative that resonated decisively with 17 per cent of voters, many of whom were plainly fed up with Liberals but not convinced by the NDP, and for his efforts he tripled his seat count.

So, here we are. It’s my bedtime and as I head off, it’s unclear what tomorrow and the days ahead hold for B.C. For pundits and political scientists, it’s Christmas in May (yes, our Christmases are very, very, very dorky affairs) as we debate and discuss the arcane twists and turns of government formation; for most British Columbians, however, life will continue pretty much as usual as everyone else sorts things out. Later, once we know who will govern British Columbia for the, let’s say, six months to four years ahead (these governing situations tend to be unstable and short lived), the changes will come—because we can be sure of one thing, in a minority or coalition government scenario, the legislative agenda will be open for business in a way we haven’t seen in British Columbia in over 60 years. What fun.