The PM is just a girl he used to know 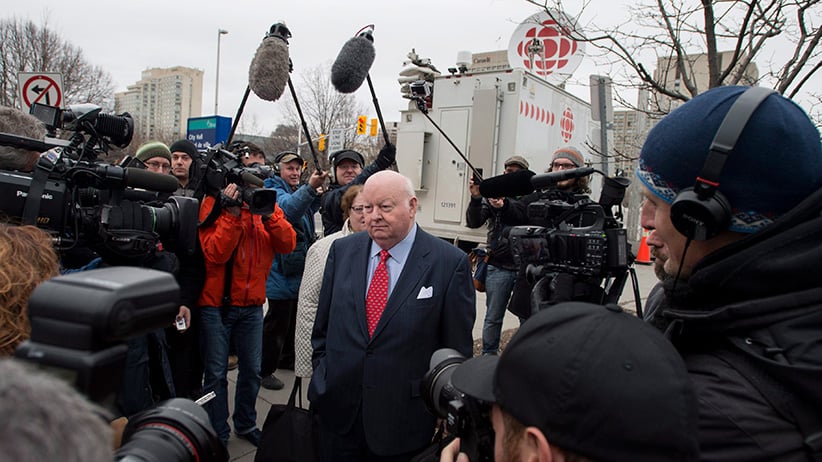 From inside Ottawa’s Elgin Street courthouse, his arrival is signalled through the glass and revolving doors with a burst of light, like electricity in a bottle. The boom mics rise, then lunge forward in unison. Then, all of a sudden out of that silent commotion, Sen. Mike Duffy, on trial here for bribery, breach of trust and fraud, slips inside.

Here Duffy’s new persona is in full view, and he is a blank. He looks unwaveringly, resolutely dead ahead, like a man who’s cut in line and is ignoring the complaints of those behind him. The quality of his suit, its cut and the grade of the wool, is obvious—he takes great pride in how he dresses—and he walks, a lightweight satchel in one hand, with a steady, deliberate gait.

On day two, as he reached the freestanding elevators and the open space under the building’s high, high ceilings, he leaned into his stride, veered left across the enamel floor, and lined up at the courthouse’s Tim Hortons concession. On day three, he did the same thing, joined by his sister-in-law and one of his lawyers.

“I can get one for Heather,” the woman was heard to say, referring to Duffy’s wife. The two sisters have sat behind Duffy on each of the three days the trial has lasted so far.

These last two days, Duffy has stood waiting in line for his coffee—it’s a slow line, a fact much remarked upon by courthouse regulars—staring straight ahead with the same vacant expression he uses in the corridors. He attracts a little gawking, but mostly people have no idea who this is: a man whose tastes run on the one hand to expensive suits, and on the other to Tim’s and to Swiss Chalet.

That dead stare may well be designed to avoid the eyes of former colleagues in the press.

At one point in the courtroom today, Duffy arrived by the media section of the gallery and passed something to Donald Bayne, his lawyer, who was busy getting quizzed by reporters on some aspect of the proceedings. For a few seconds Duffy stood there, looking at his former colleagues, people he worked with for years, silent but watchful.

His eyes were wide, like they were speaking to us. Then he went away. At the desk he’s been given behind his lawyers, you can see the light touch he has at the keys. He wears French cuffs, and he is careful not to permit them to clunk against the wooden table.

The arguments that unfolded there in front of him, and before Justice Charles Vaillancourt, were today intensely abstruse: more on the power of “constitutional residency” as a designation that, once made, changes like an incantation the world of houses and chimneys and where you hang your hat, into a world of weightless expense claims, instruments of advice, declarations, and airplane boarding passes.

Watching Bayne square off against Mark Audcent, retired law clerk to the Senate of Canada, who just underwent his second day of cross-examination—he’ll appear again on day four—was like being in the room when the egghead logicians Bertrand Russell and Ludwig Wittgenstein argued about whether there was a hippo in the room. Only here it was the even more esoteric question of what residence means in the Income Tax Act versus what it means according to the apparently fuzzy rules on this subject for senators. “A residence as a house is not the same thing as being resident,” Audecent was heard to say at one point.

Though it can occasionally conceal it, this airy-fairy talk—the substance of the proceedings—frequently also heightens the pathos of the situation, which is that a man’s life has been turned upside down, whether due to his own avarice or because of a strange conspiracy of insiders it is the aim of this legal process to uncover.

When that happens, it’s powerful. Such a moment arrived today when Bayne, apparently in the service of demonstrating his client’s important relationship with Prime Minister Stephen Harper, pulled out two large-format photographs of Duffy with his old boss, taken in better days. Both offered a glimpse of a high-profile public event back when Duffy was a useful champion of Harper government policy, and a fantastically successful fundraiser for the Conservative party.

Related: The Duffy compass: Who’s up, down, behind us and still ahead after Day Three

One of the big, cardboard-mounted photographic prints featured prominently Harper’s handwriting: “To Duff,” the personal written message said, “A great journalist and a great senator. Thanks for being one of my best, hardest-working senators ever!”

For whatever reason, Bayne propped both these photographs up on Duffy’s desk, within just a metre of him. What did the senator make of this, his fall from favour so eloquently illustrated, like the old photograph in the George Jones song—”She’s Just a Girl I Used to Know“—with the lyrics about the old flame in the beat-up snapshot.

Duffy left one club, the tight-knit family that is the parliamentary press gallery, for Harper’s fold. Now he’s not in either corner, and has reportedly mortgaged his home, presumably to help defray the costs of  his ordeal.

It wasn’t clear whether he ever looked at those pictures beside him in the court today. He just kept looking dead ahead.