The PQ’s biggest threat? Itself.

As the Parti Québécois looks for a new leader, even long-time separatists are wary of independence talk 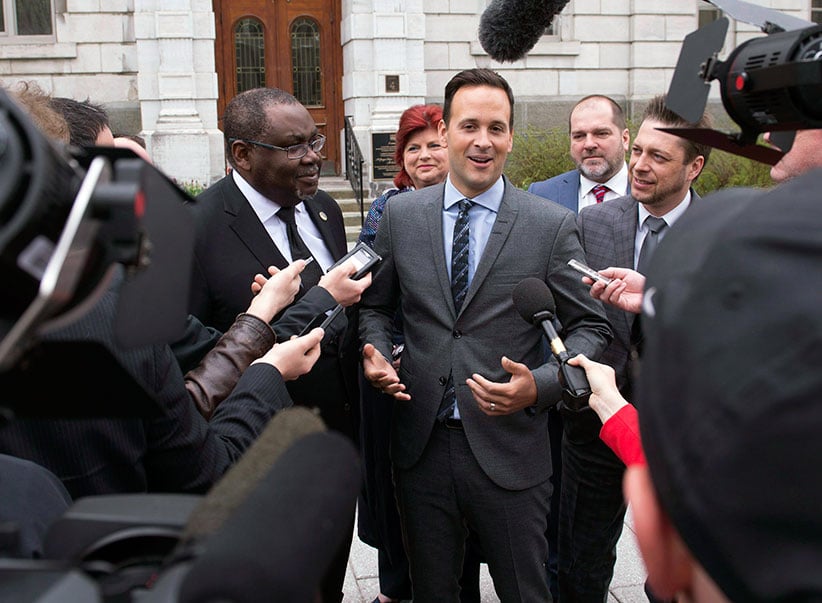 Normally, there is a cleansing aspect to a political leadership race. Coming in the wake of bruising defeat, it allows a party to make a show of taking stock, seeking out new blood and renewing policy. This mixture of humility and self-confidence is usually good media fodder, crucial for a party to stay relevant through the lean years in opposition.

In this sense, the current Parti Québécois leadership race is lacking on several fronts. There was no recent crushing defeat—that came more than two years ago, when Quebec’s main sovereignist party lost to the Liberals. Rather, the current race is to replace Pierre-Karl Péladeau, whose quick rise to the top of the party was matched only by his swift departure less than a year into the job.

Nor is there much new blood. Three of the four people vying to lead the PQ also ran in 2015. And beyond the rather batty notion, made by hard-left candidate Martine Ouellet, to nationalize Quebec’s Internet infrastructure, there is little policy renewal. Nor has there been much media buzz surrounding the upcoming debates (the first party organized debate is on Sept. 11) or the campaign in general, which will culminate with a new PQ leader chosen on Oct. 7.

Instead, there is yet another variation of the ancient PQ conundrum: when and how to remove Quebec from the country. This isn’t a popular subject. One 2015 poll found only 11 per cent of Quebecers thought sovereignty was a priority. Two decades after the last referendum, the PQ’s biggest enemy isn’t English people, the Maple Leaf or even Justin Trudeau’s cheery, pan-Canadian optimism. It’s the raison d’être of the PQ itself.

Related: The PQ’s cycle of self-destruction is terrible for Quebec

There is perhaps no better reflection of this fact than the campaign of Jean-François Lisée, the 58-year-old author, political operative and former PQ minister who—along with Alexandre Cloutier—is the frontrunner in the campaign. Lisée is canny enough to admit publicly that Quebecers don’t want another referendum and as leader he promises not to hold one during the first mandate of a PQ government. “We know that a large majority of Quebecers are resistant to another referendum, or any move toward sovereignty. To force the issue would be to once again push more voters into the arms of the Liberals, giving them another victory,” he wrote in May.

Though disingenuous—who is to say Quebecers will be any less resistant in a second PQ mandate?—Lisée’s gambit nonetheless robs the Liberals of an important campaign weapon. Save for the electorate’s 18-month dalliance with the PQ beginning in 2012, the Liberals have held power for the last 13 years. The party has weathered the years, not to mention umpteen corruption scandals, by raising the spectre of a referendum at every opportunity. Under Lisée, such scaremongering would be rendered largely toothless.

Alexandre Cloutier, the presumed heir to the leadership until Lisée’s recent rise, has age (he’s 39), cheekbones and a sizable chunk of the PQ caucus on his side. He’s a University of Cambridge-trained lawyer and one-time clerk of the Supreme Court of Canada, though many Péquistes like him as much for his ability to not look schlumpy next to Justin Trudeau. Young as he is, Cloutier’s approach to achieving sovereignty is achingly familiar. To wit: he will organize a “work site” comprised of PQ members and elected officials before the next election to decide whether he’ll hold a referendum. A vote on sovereignty, he’s said, will only happen once he has the “profound impression” that Quebecers are ready. Every PQ leader save for René Lévesque and Jacques Parizeau has said much the same thing. (Neither Cloutier nor Lisée responded to interview requests.)

Whoever is elected leader will have to contend with growing apathy amongst indépendantistes themselves. In August, former PQ candidate Tania Longpré penned a column in Le Journal de Montréal entitled “The old dream.” “The Parti Québécois is losing steam, and not just over the last few months. Its goal [of sovereignty] no longer excites the masses beyond a few Facebook pages. It is here where we seem to be living our old dream, not realizing that the rest of the world is elsewhere,” she wrote.

“It hurt to write that, but it was in my head for a long time,” Longpré says. “I was in denial, as is the case when you’re dreaming.” For her efforts, she was pilloried as a sellout and traitor by her former allies. “But in private, many agreed with me. A PQ MNA even wrote me saying that she thought the same thing,” Longpré said.

Longpré says the province already has the tools to deal with issues like the integration of immigrants into Quebec society. She notes how Quebec selects 70 per cent of the immigrants coming to the province. Despite this, or perhaps because of it, the unemployment rate for immigrants who arrived in Montreal in the last five years is 18 per cent, according to the OECD—more than double the provincial average. “It’s nice to blame Canada, but it’s our fault that so many immigrants can’t find jobs.”

Quebec’s creeping indifference to sovereignty, along with its long-standing malaise over the place of immigrants within its borders, has largely benefited the Coalition Avenir Québec. Led by former PQ minister François Legault, himself a sovereignist-turned-agnostic, the CAQ couples economic nationalism with populist, fleur-de-lis-waving rhetoric. The party wants rules to keep large Quebec businesses from falling into foreign hands, other Canadian provinces very much included. It would also introduce a sort of loyalty test for immigrants. A CAQ MNA recently mused about banning the “burkini,” the Muslim body-covering swimwear for women.

In short, the CAQ is much like the latter day PQ, minus the constant agonizing over separation. Tellingly, several key PQ organizers have decamped to Legault’s side. The party’s internal polling suggests he is the most popular leader in the province, more so than Quebec Premier Philippe Couillard. There is palpable buzz around the CAQ. The same can’t be said for the next leader of the Parti Québécois, whoever it may be.